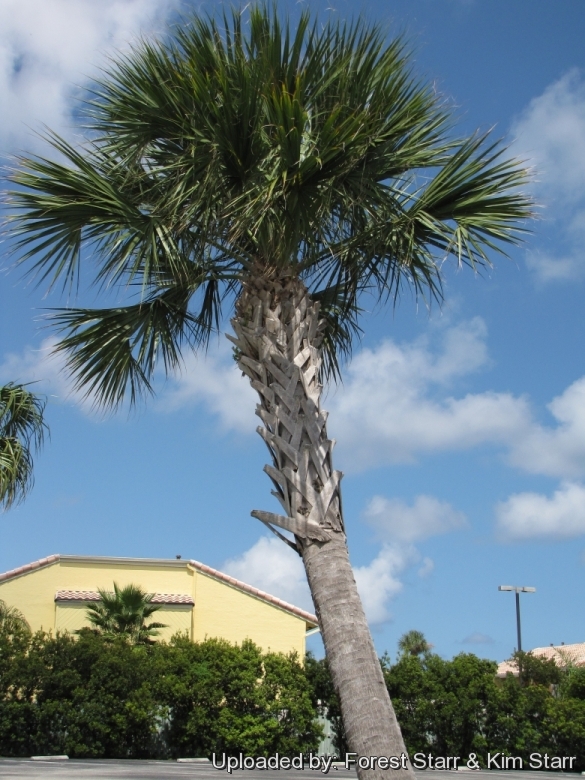 Origin and Habitat: South-Eastern United States (Florida peninsula to the coast of North Carolina and Virginia), Cuba, and the Bahamas.
Habitat: It grows in sea-coast evergreen forests, barrier islands, coastal hammocks, sandy shores, tidal flats and elevated areas in brackish marshes in xeric to moist soil conditions. Climate is principally subtropical to warm temperate, humid with 1000-1770 mm of rain per annum, minimum and maximum temperature ranging from -4° C to 36° C.

Description: It is a distinct fan palm with an upright solitary trunk.
Trunk: up to twenty metres tall, and a diameter of about 30-40 cm in the median area (with exceptional individuals up 28 m in height, with a trunk up to 60 cm), covered for a good part by the residuals of the old leaves petioles, which persist for a while near the crown and cross in a characteristic way creating a spiky, "basketweave" effect. These remnant leaf bases are called "bootjacks" or "boots". After shedding (or removing) of “bootjacks” the trunk appearas light-grey to gray-brown, relatively smooth, columnar, tough and splits vertically. Transplanted palms are sometimes deliberately shorn of these bootjacks. The trunk of the Sabal palmetto grows towards the sun and does not have any thorns or spikes. The underground part of the trunk is short and bulbous, surrounded by a dense mass of contorted roots.
Crown: Symmetrical, rounded, green, usually spreading between 2,5-5,5 m .
Leaves: Alternate, 2 m of length, rounded, green to dark-green, costapalmate (with a bare petiole which extends as a centre midrib, (costa) 1/2 to 2/3 the length of the blade), deeply cut in 40-60, generally rigid, segments up to 80 cm long, folded upwards and arranged radially like in a palmate leaf, filamentous at the margins and bifid at the extremity. Petiole unarmed, 1,5 metres long. All leaves are markedly recurved or arched backwards.
Flowers: The inflorescence is a very ramified cup shaped, compound panicle, up to 2,5 m long that grows between the leaves and normally does not exceed their length. The flowers in profusion are perfect (hermaphrodite), fragrant, 5-6 mm across, 3 mm long and of a creamy or yellowish colour.
Blooming season: Spring to summer.
Fruit: Nearly spherical fleshy drupe, 05-14 mm in diameter, dark shiny blue or black when ripe and containing a single seed, maturing in early fall and persistent into the winter.
Seed: Small, hard, shiny brown. Each Sabal palmetto will drop thousands to tens of thousands of seeds per year and if not properly pruned, will overgrow small plants or shrubbery in the area. 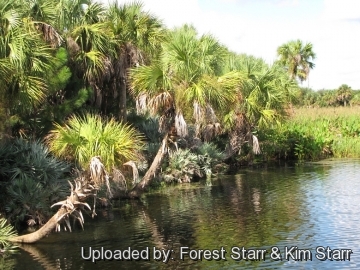 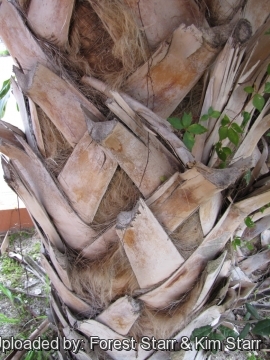 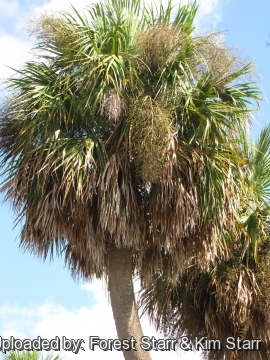 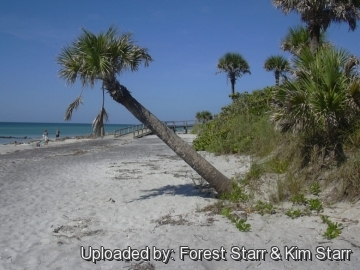 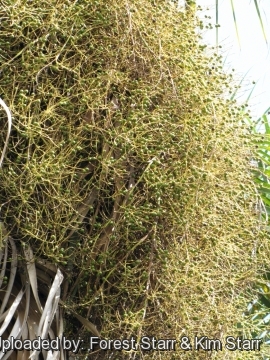 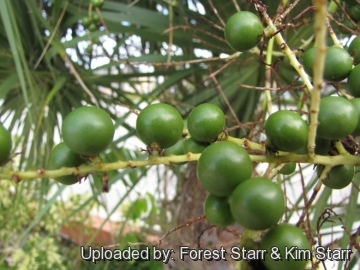 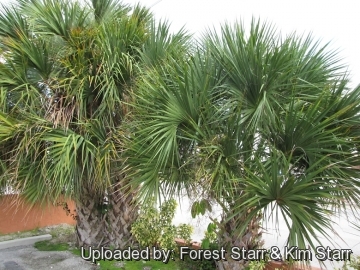 Cultivation and Propagation: This is an excellent palm widely cultivated, especially in the south of USA and in the Caribbean, for its ornamental characteristics and its rusticity. Sabal palmetto is very easy and very adaptable. It is little slow to take off but once established will grow quite fast and does well in cultivation.
Soil requirements: It has a fibrous root system and benefits from deep organic, soils that are fertile and well drained, but it adapts, in fact, to various types of tropical soil soils, like coastal marine alluvial clays, sand, soils of volcanic origin and other coastal alluviums and even in seasonally flooded areas and swamps.
Watering: It prefers regular moisture watering and regular feeding, but can tolerate temporary flooding or a fluctuating water table, as might be found along rivers and even drought, standing water and brackish water.
Light: Will take full sun as it matures, but will grow better with some shade. If home-grown, give some sun as with most tropical palms.
Fertilization: Need a perfect fertilizer diet including all micro nutrients and trace elements.
Salt aerosol tolerance: It is extremely tolerant to salt sprays and is often seen growing near the sea, but it do not tolerates saltwater flooding.
Hardiness: It is quite frost hardy and is suited for subtropical and warm temperate climate (can survive temperatures of 10°-20°F in its home habitat). (USDA zones 8-9 ).
Wind hardiness: It tolerates high winds and has good hurricane resistance.
Garden uses: It is an excellent landscaping palm able to grow where washed by sea water at high tide.
Food/beverage use: Sabal palmetto is one of several palm species that is sometimes used to make heart of palm salad. The heart of palm (vegetative apex) was particularly appreciated by the natives and was used fresh as a vegetable, from which the common name of cabbage or artichoke, but its collection, still practised, even if in a very limited extent in certain areas, causes the death of the palm, as it is the only point from which the plant can grow. In substitution to the traditional palmetto heart it is often used the palm heart obtained from Euterpe oleracea which, since it clusters, can go on living to be harvested later, and it's pretty fast growing so it can replace the cut stems in a few years.
Insects and Diseases: Generally very healthy palm.
Propagation: The fresh seeds germinate easily in 2-3 month. If not properly treated, the seed does not have long shelf life.