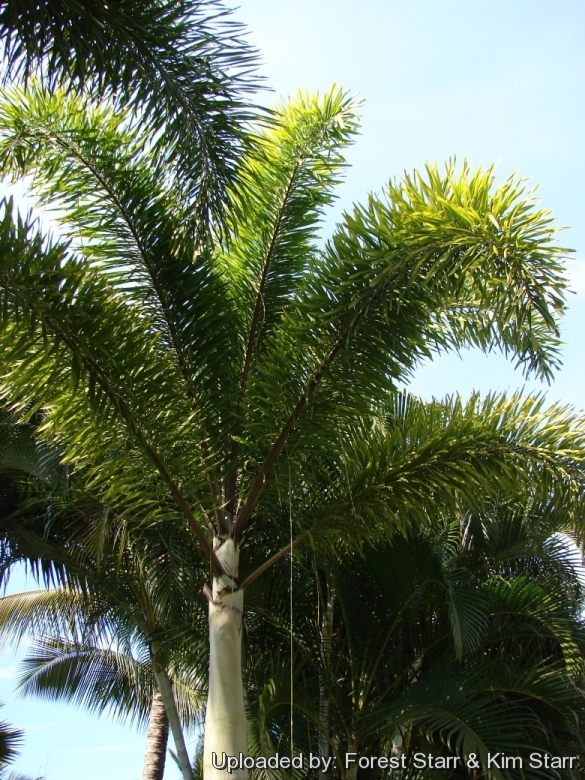 Origin and Habitat: Endemic to a small area on Cape Melville in the Cape York Peninsula, north Queensland.(Australia) It is a very popular ornamental palm cultivated worldwide in tropics and sub-tropics.
Altitude range: between 50 and 400 metres above sea level.
Habitat: Wodyetia bifurcata is a canopy tree that grows in open forests and scrublands on gravel hill tops amongst rocks and enormous granite boulders on sandy, granitic soils. The climate is characterized by a marked seasonality with a prolonged dry season.

Description: Wodyetia bifurcata is a very attractive monoecious, thornless, palm with long plumose leaves (hence the name 'Foxtail') It has one of the most spectacular foliage displays of all palms.
Trunk: Solitary, slender, 10-20 m tall, 20-25 cm in diameter, bottle shaped, slightly swollen on the median part, smooth, with a grey to almost white colour, closely ringed with dark trace of the junction of the fallen leaves.
Crownshaft: Creamy green to blue-green very smooth, with a thin greyish-white tomentum, wrapping wholly the stem for a length of 0,8-1,2 m. The crownshaft is the part of the palm where its leaves emerge..
Canopy: A mature foxtail palm has a canopy of 8-10 leaves, each with the characteristic foxtail or bottlebrush appearance, and a crown of foliage 4,5-6,0 m across.
Leaves (fronds): Pinnately compound, pale green to dark green, arching, 2,5-3,2 m long, on a 20-40 cm long petiole, with up to 70 cm long pinnulae up to 20 cm long in the median part, light green below, subdivided in several parallel whorled segments that radiate out at all angles around the rachis , even 17 in the central ones, with truncated and toothed apex, and wrapping partially the rachis, which give the leaf a particularly fluffy look, thus appearing like a bottlebrush or the tail of a fox.; petiole and rachis have the surface covered by grey to brown scales.
Flower: The green inflorescences come out on a thick stem under the leaves at the base of the crown, are horizontal or hanging, much ramified, up to about 1 m long, with cream flowers disposed on the branch (rachilla), of both sexes in the typical triad (one feminine flower between two masculine ones), but at the extremity, where are present only masculine flowers in pairs or single, and a single palm is capable of producing fertile seeds.
Fruit: Large ovoid, in colourful clusters, 5-6 cm long (about the size of a duck egg) red to orange at maturity forming an attractive display, containing just one seed surrounded by a layer of flat blackish coriaceous fibres.
Seed: Fibres which surround the seed.

Notes: This palm is very closely related to another north Queensland palm, Normanbya normanbyi. The common name is in reference to the fronds appearance, which some people think resemble the bushy tail of a fox. 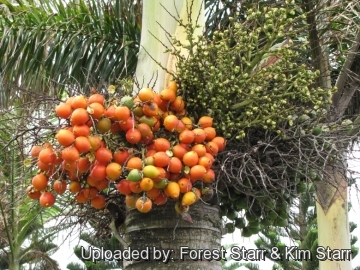 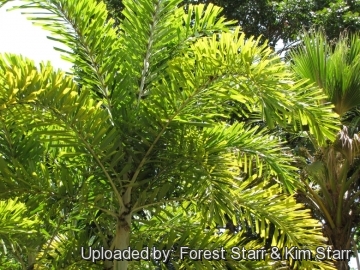 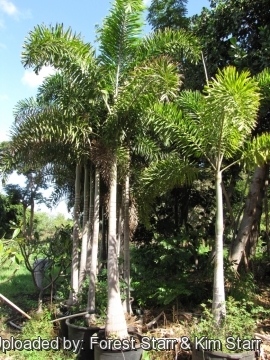 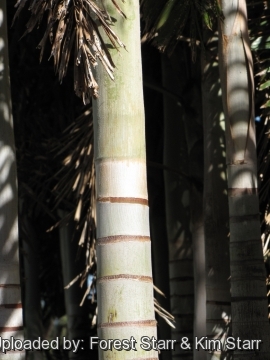 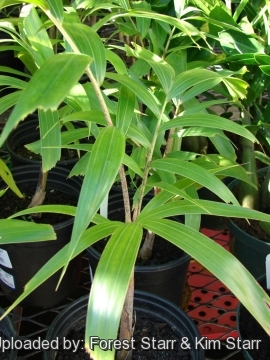 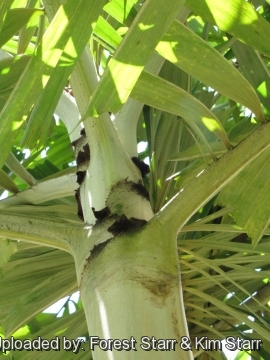 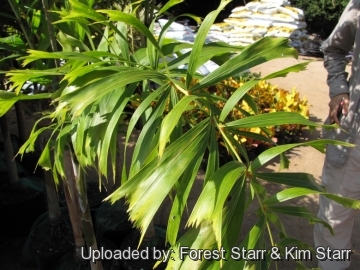 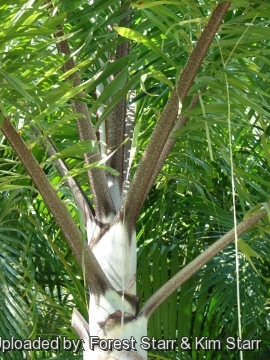 Cultivation and Propagation: It is a widely grown palms in tropical and sub-tropical climates which, in very few years after its discovery has become one of the most popular and sought for palms, also due to its growing speed and its adaptability to various situations. This palm is easy to grow and transplant, is very hardy and tolerating neglects. The foxtail growth rate has been documented to be 60-90 cm/year under good conditions.
Soil: It prefers a well-drained soil with a slightly acidic pH however it is very adaptable to many kinds of well drained soils: clay; sand; loam, including alkaline limestone soils and rocky sands.
Fertilization: It respond very well to fertilizer and need a perfect fertilizer diet including all micro nutrients and trace elements or slow release fertilizer applied during the growing season, or according to package directions, using a fertilizer specifically formulated for palms. As with other palms, potassium and magnesium deficiencies may occur and mineral supplements should be administered in recommended amounts to prevent or treat such deficiencies.
Water Requirements: It tolerates low levels of humidity and may bear drought periods, but with a slower growth and a less luxuriant look, unless underground water is available. When supplied with adequate moisture and fertilizer it is fairly fast growing. It dislikes soggy or over-irrigated soils because it frequently develops trunk or root rot. Care should be taken not to overwater foxtail palms that are grown in containers.
Light: It prefers bright sunny locations and even quite small specimens are extremely hardy, being able to take full sun from a very early age, but it also does well in part shade with some direct sunlight.
Aerosol salt tolerance: It is somewhat salt resistant and therefore, utilized close to the sea side, but best if given some protection (behind a dune, building, etc.)
Wind resistance: It endures drying winds.
Hardiness: Is cultivation may be tried also in the warm temperate zones having particularly mild winters, where the adult plants can resist to exceptional and very short lasting decreases of temperatures ( USDA Zones 10-11) and established plants have survived brief periods of temperatures as low as −2 °C without significant damage. Palms in fast-draining soil are more cold hardy. During the winter, leaves may become temporarily discoloured by damp cold and frost.
Roots: Usually not a problem.
Breakage: resistant.
Transplant: Even large California fan palms can be successfully transplanted.
Maintenance: For the healthiest and most attractive plant, keep the palm pruned. As the old fronds die, these should be trimmed off and the leaf bases allowed to dry out, but do not prune if the frond still has some green colour. Palms recycle nutrients from dead or dying fronds and use them for healthier fronds.
Pest and diseases: It rarely attract pests and disease, and is quite resistant to lethal yellowing disease.
Uses: It is a plant of a very high ornamental and landscape value, due to the particular appearance of its leaves, as isolated specimen, on group or in rows . Plant it outdoors in a site that can accommodate the large head of leaves (4,5-6 m average landscape size), and is not directly under power lines or other structures. Use this palm in natural and formal groupings and in large open areas. It is a striking sight when planted at equal intervals along a boulevard, street without pavement, avenue and parkland planting where it typically is spaced about 9 m apart or when snuggled up in groups against high rise building. It is also excellent in containers and urns. And thanks to its drought resistance and durability to heat it can thrive in harsh urban conditions. The foxtail palm becomes even showier when its brilliant red fruit is on display.
Propagation: By seed. Seeds are very easy to germinate, taking 1-3 months if kept at about 30° C, but others will take up to 12 months to sprout. The growth is fast if regularly watered and fertilized.