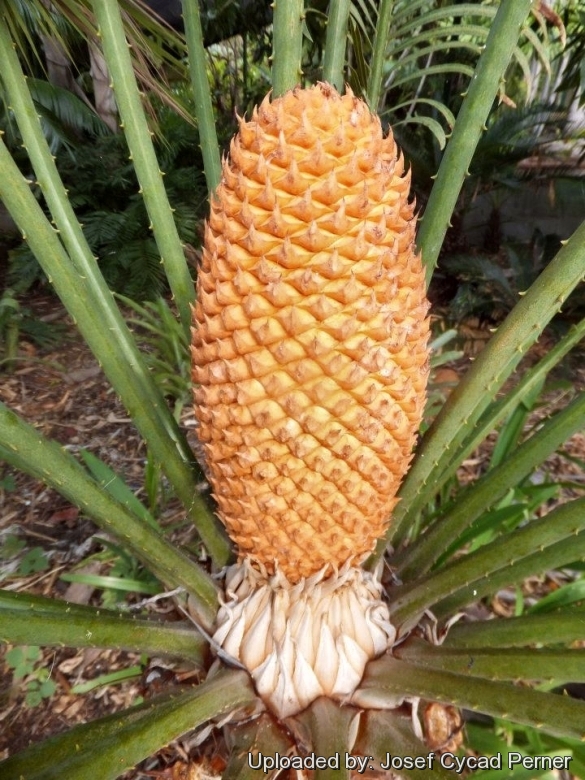 Origin and Habitat: Cycas thouarsii is a widespread species abundant particularly in east coast of Madagascar, the Comoros Islands, Mayotte and the Seychelles (Aldabra). Scattered occurrences are also known on the East Coast of Africa from Tanzania (Pemba), throughout Kenya south the Mozambique, where the species may have been established by Arab traders because of its beauty and food value, but some of the stands appear to be long-established and likely to pre-date seafaring traders. It is locally abundant species with the population estimated to number more than 10,000 mature individuals. The closest related species is Cycas circinalis distributed from southern India to the Philippines, and it indicates a former  phytogeographic connection between Madagascar and Asia.
Altitude range: Sea level up to 200 metres.
Habitat and ecology: Like others in this group, Cycas thouarsii is a species of near-coastal sites, where it grows in open coastal forests behind beaches and on headlands, often on calcareous sand derived from corals. They occur sparsely as individuals or in small groups. Rainfall ranges between 1,000 to 3,000 mm per annum. Although there are some threats, although plants would have been impacted in places by collectors, coastal developments (tourist resorts, urban expansion) and agricultural expansion (small-holder crops), these are not significant enough to warrant listing the species in a threatened category. Generation Length about 40

Description: Cycas thouarsii, sometimes misspelt "thuarsii", is a palm-like cycad that grows to become one of the largest species and probably the fastest-growing. It is the only member of the cycad family in Madagascar and can reach over 10 metres tall, with a thick trunk up to 45 cm diameter, producing offsets along its length. It generates up to 40 leaves at a time, each up to 3 metres long and is very similar in appearance to Cycas rumphii. Cycas thouarsii may be the oldest living Cycad, surviving unchanged from the Mesozoic (100-190 million years ago), became the most significant single plant adaptation in the history of life. The flowers are dioecious (individual flowers are either male or female, but only one sex is to be found on any one plant so both male and female plants must be grown if seed is required). The male flowers are united in a cone, and the female plant produces globose naked seeds. The plant is not self-fertile.
Distinguishing features: Distinguished within the group of species with spongy endocarp by the distinctly bluish new leaves with wholly spinescent petioles and the pronounced stout spines on the microsporophylls. Seeds do not have a crested sclerotests.
Derivation of specific name: The epithet “thouarsii” honours the French botanist Louis-Marie Aubert du Petit-Thouars (1758-1831).
Stem (trunk): Monopodial, well-developed, cylindric, casually branched when old, 3.5-10 metres tall, covered with the
Leaves: 1.5-2.1(-3) metres long, 30-60 cm wide above the middle, flat (not keeled) in section (opposing leaflets inserted at 170-180° on rachis), bright green, shining above, rather paler beneath, tomentum shedding as leaf expands. Petiole 40-50 cm long, spinescent and slightly angular, quite glabrous. Rachis usually terminated by paired leaflets. Median leflets very coriaceous, 60–100 pairs, simple, linear, gently curved, (20-)22-32(-38) cm long, 8-12 mm wide, , inserted at 45° to rachis, slightly unequally attenuated at the base the lower edge there shortly decurrent and somewhat concave, apex acutely acuminate slightly indurated, but not spinescent, margin entire and slightly recurved on either edge, midrib prominent grooved above, raised below.. Basal leaflets not gradually reducing to spines, 170 mm long.
Cataphylls: The cataphylls (Modified leaf, much reduced and thickened, serving to protect the apical meristem in cycads produced in flushes preceding the emergence of cones or leaves.) are narrowly triangular, pungent, pilose and persistent.
Male cone: Shortly peduncled, brown, oblong-cylindric to fusiform, orange to brown (pale), 30-45 cm long, 12-15 cm wide; peduncle under 5 cm long, sparingly brown-pubescent; scales horizontally spreading, obovate-deltoid, 4-5 cm long, 12-18 mm wide, microsporophyll lamina firm, not dorsiventrally thickened, with a barren glabrous basal portion 5 mm long, fertile portion glabrous, 2.5-3 cm long, considerably longer than broad, apical spine prominent, sharply upturned, 18 mm long, clothed externally with close brown tomentum, glabrous above.
Female spike: When female inflorescences are present, the genus Cycas can easily be recognized by the loose structure of the inflorescence, as in all the other genera the female inflorescences are compact cones. Instead Cycas rumphii carry ovules and seeds on fleshy, leaf-like megasporophylls about 9-32 cm long, yellow-tomentose. Stalk long, rusty-pubescent, with 2-6 glabrous ovules above the middle, passing insensibly into the ovate-lanceolate lamina, which is ovate to lanceolate, 80-100 mm long, 20-25(-30) mm wide, obscurely dentate or subentire, with 12-16 soft lateral spines 0-2 mm long, apical spine distinct from lateral spines, 15-35 mm long. glabrous on both sides towards apex and margins, elsewhere closely rusty- on both sides towards apex and margins, elsewhere closely rusty-pubescent.
Seeds:ovoid-globose, 50-60 mm long, 4 cm wide; outer coat ( sarcotesta) red to orange-brown, fibrous layer absent; sclerotesta smooth. Spongy endocarp present.
Note: Cycas thouarsii is most nearly allied to Cycas rumphii, Miq., from south-eastern Asia, and rather less closely to Cycas circinalis, Linn., from southern India and south-eastern Asia, of which it has been considered by some authors to be a geographical form. 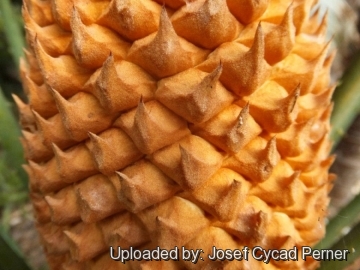 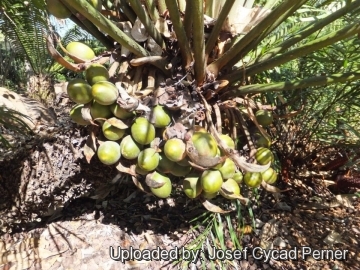 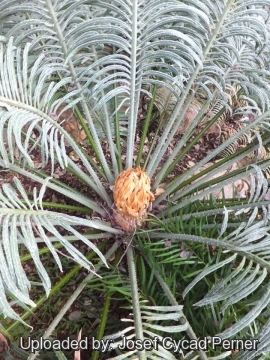 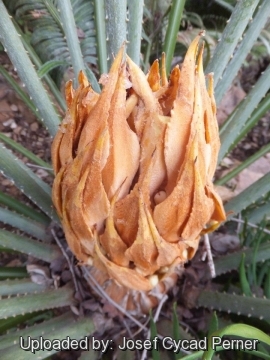 Cultivation and Propagation: Cycas thouarsii is suited to tropical regions which have a seasonally dry climate, but it grows best in a moist, well-drained location, with light shade. During dry periods, it benefits from mulches and ample watering, and can handle occasional temperatures down to -2°C. It is often the focal point in a large yard.
Growth rate: Usually slow growing, however good conditions can speed it up considerably. Because of its growth habit, fertilize only when terminal bud begins to swell, indicating the start of the annual growth cycle.
Exposure: It prefers bright light exposure but colour bleaches when in full sun; best with some protection from afternoon heat.
Soil: Needs a well drained spot, with deep soil, but will still thrive in less than ideal conditions.
Maintenance: Minimal; removal of offsets if desired, removal of spent fronds.
Use: Landscape as cultivated perennial in warm, coastal areas; House-plant or interior-scape, as container plant in cool areas, as well very well suited to bonsai culture.
Use as food: This species is said to be a source of Sago in Madagascar and perhaps Mauritius. The starch in seed and in the pith of the trunk is poisonous. The potent poison in the seeds is removed by soaking them in water. Water from the first seed-soaking will kill birds, goats, sheep and hogs. Water from the following soakings is said to be harmless. After the final soaking, the seeds are dried and ground into flour. The flour is used to make tortillas, tamales, soup and porridge. However, consumption of the flour may result in a neurological disorder because of the neurotoxins content; there is so far no evidence of its economic use on the African continent.
Propagation: Seed. As a slow growing plant, the seed can take from 6–18 months to germinate. After fertile seeds are collected, they usually need several months of storage before the inner embryo is ready to germinate. Therefore, it is best to clean the seeds of external fruit and set them aside before attempting to propagate the seeds.