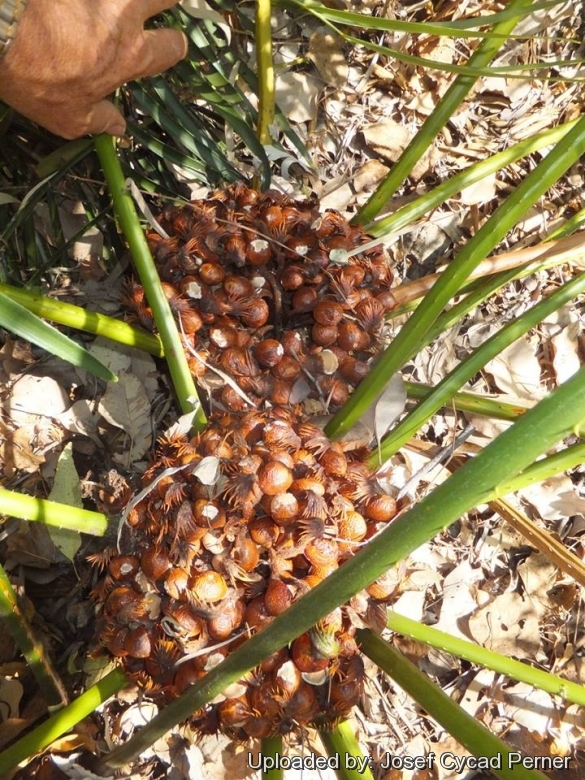 Origin and Habitat: Cycas simplicipinna is known from Yunnan in China, western Quang Tri Province in Viet Nam. Further, it is widely distributed in the mountains of northern Thailand. This species also occurs in northern Myanmar and Laos. The species appears to be usually scattered and sporadic in occurrence with population size estimated to be larger than 10,000 mature individuals, and dense stands are uncommon.
Altitude range: This species is recorded from 600 to 1,300 metres above sea level.
Habitat and Ecology: This species occurs in wetter and more sheltered sites in deep shade in in the understorey of tall closed humid evergreen forests. Individuals are usually scattered and sporadic in occurrence, and dense stands are uncommon. Often occuring near streams. Continued land clearing may become a threat across the vast distributional range of this plant. However many populations remain across this range, with a number in conservation areas, and it is not under any immediate threat of extinction.

Description: Cycas simplicipinna is small, trunkless or rarely short- trunked, shrubby cycad to 2.5 m tall. It produces several rather large ascending, pinnate leaves. The plants are dioecious, that is to say that male plants produce pollen by leaf homologues called microsporophylls, and female plants produce ovules by leaf homologues known as megasporophylls, but only one sex is to be found on any one plant so both male and female plants must be grown if seed is required. In all cycads, the microsporophylls are arranged spirally about a cone axis; but Cycas, megasporophylls are similarly arranged. Megasporophylls of Cycas do not form a true cone but are arranged in two to three whorls at the stem apex. Later the stem resumes vegetative growth. The almost totally subterranean habit with the very sparse crown of large, erect leaves with few, broad, well-spaced leaflets and small and narrow male cones immediately distinguish this species from all other Thai cycads. The small megasporophylls with short spines on the apical lamina and small seeds are also distinctive.
In this species The plant is not self-fertile.
Derivation of specific name: From the Latin 'pinna', first division of a compound leaf, with the compound prefix simplici-, simple, referring to the simple leaflets in contrast to the divided leaflets of Cycas micholitzii, of which this taxon was initially regarded as a variety.
Stem: (7-)8-14(-20) cm diameter, mostly subterranean (acaulescent ) or rarely above-ground and short-creeping, bark nearly smooth, pale grey to yellowish.
Leaves: 2-5 in crown, pinnate, erect to ascending, bright green to deep green, highly glossy, with orange tomentum shedding as leaf expands. Petiole 35-140 cm long (40-60% of total leaf), lateral margins armed with short spines. Rachis 90-250 cm long consistently terminated by paired leaflets. Pinnae (leaflets ), 18-38(-45) on each side of rachis, 20-56(-60) cm long, 1.4-2 cm wide, regularly arranged, remote, 20-40 mm apart on rachis (opposing leaflets inserted at 160-180° on rachis), decurrent for 5-10 mm, lower ones not reducing gradually to spines, 120-300 mm long, midrib raised above. Median leaflets section flat (not keeled) in section. Margins flat or undulate.
Cataphylls: The cataphylls (Modified leaf, much reduced and thickened, serving to protect the apical meristem in cycads produced in flushes preceding the emergence of cones or leaves.) are 4-5 cm long, soft, pilose, and articulated.
Male cones: Small and narrow (15-21 long, 2.2-4 cm in diameter), spindle-shaped, creamy-yellow, microsporophylls 1.2-1.4 long, 0.8-1 cm wide, fertile zone 8-10 mm long, sterile apex 3-6 mm long, raised, apical spine absent.
Female: Globular, megasporophylls 7-12 cm long with brown, felt-like indument. Lamina ovate, 45-55 mm long, 18-35 mm wide, deeply pectinate, margins prominently comb-like,lateral spines 15-25 mm long, 1.5-2 mm wide, apical spine not distinct from lateral spines. Ovules 2, glabrous.
Seeds: 2.5-2.7 long, 1.8-2.1 cm broad, ovoid. Sarcotesta yellow, not pruinose, fibrous layer absent, sclerotesta verrucose. Spongy endocarp absent.

Subspecies, varieties, forms and cultivars of plants belonging to the Cycas micholitzii group 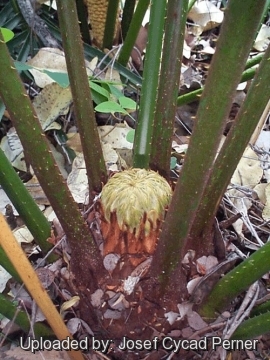 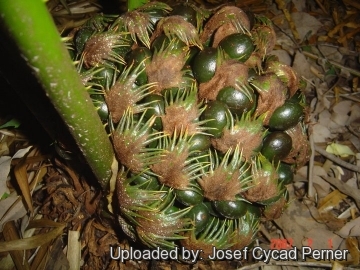 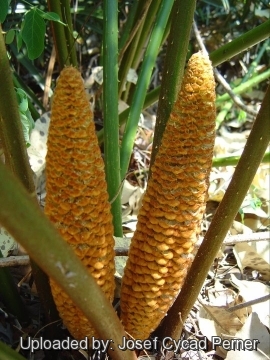 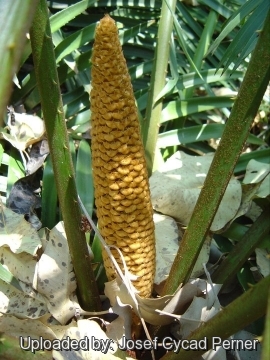 Male cones in this species are small and narrow. Photo by: Josef Cycad Perner 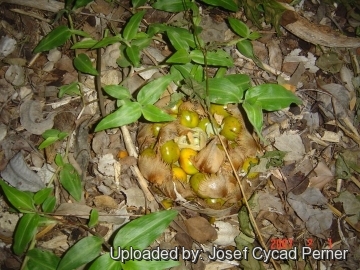 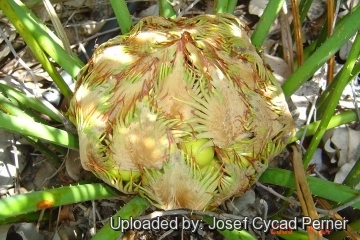 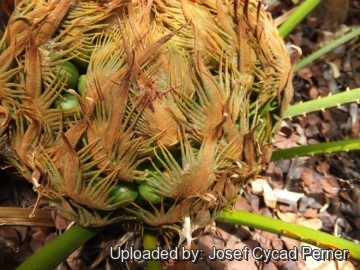 Cycas simplicipinna Photo by: Josef Cycad Perner
Send a photo of this plant.

Cultivation and Propagation: Cycas simplicipinna is suited to tropical regions which have a seasonally dry climate. It is easy to grow, tolerating short dry periods. It is attractive as a young plant because of the elegant feathery fronds. Cycas simplicipinnais suited to pot culture.
Exposure: It prefers bright light exposure to shade, colour bleaches when in full sun, best with protection from afternoon heat.
Soil: Needs a well drained spot, with deep soil, but will still thrive in less than ideal conditions.
Fertilizaton: Because of its growth habit, fertilize only when terminal bud begins to swell, indicating the start of the annual growth cycle.
Maintenance: Minimal; removal of offsets if desired, removal of spent fronds.
Hardiness: This species is probably a tropical in its needs.
Use: Landscape as cultivated perennial in warm, coastal areas. House-plant or interior-scape, as container plant in cool areas.
Warning: Petiolar spines are short and well spaced, but still sharp so take care when pruning.
Propagation: Seed. As a slow growing plant, the seed can take from 6–18 months to germinate. After fertile seeds are collected, they usually need several months of storage before the inner embryo is ready to germinate. Therefore, it is best to clean the seeds of external fruit and set them aside before attempting to propagate the seeds. Usually seeds are ready to germinate after 2-4 month, the germination is rapid and almost all seeds germinate up within 2 month.