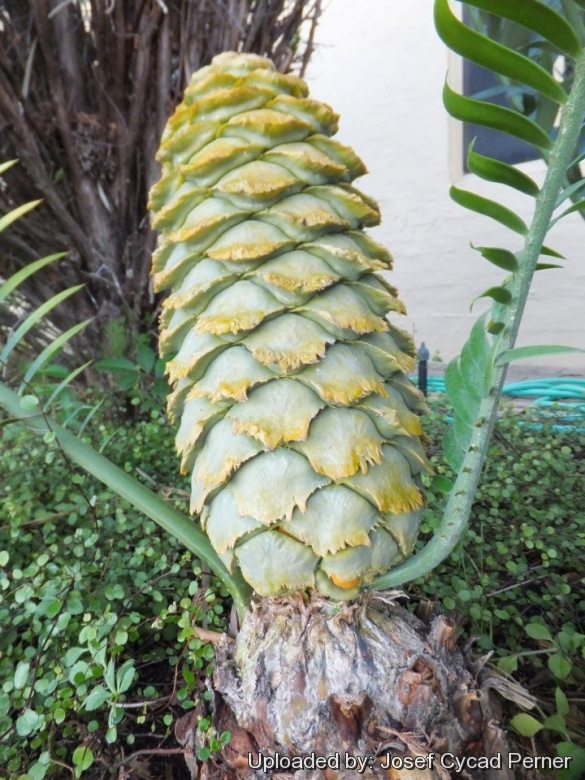 Encephalartos villosus Photo by: Josef Cycad Perner
The female cones are glossy greenish-yellow to orange-yellow when ripe with the scale face fringed overlapping the scale below.

Origin and Habitat: Encephalartos villosus is a widespread species and one of the most common cycads in South Africa. It occurs from near East London in the Eastern Cape Province of South Africa, continuing through KwaZulu-Natal province and then on into parts of Swaziland. There are several substantial subpopulations throughout its range with a total population probably in excess of 100,000 plants. Hybrids of Encephalartos villosus with Encephalartos altensteinii and Encephalartos lebomboensis are respectively reported from Near East London and Pongola Poort, both with leaf and cone characters which are intermediate between the parent species. Recent fieldwork points to the possibility of an intermediate species between Encephalartos villosus and Encephalartos umbeluziensis.
Altitude range: 100 to 600 metres above sea level.
Habitat and Ecology: This is a subterranean species which is frequently found growing in large clusters. Typically as an understorey plant in sub-tropical dense coastal forest and in scrublands experiencing Summer rainfall, varying from 1.000 to 1.250 mm per annum, but populations also occur in more temperate areas with mild winters. Male plants produce cones with an unpleasant odour when mature. The odour attracts a specific pollinator weevil Antliarhinus zamiae, in fact the position of the cones must, in most cases, render wind-pollination impossible for the bush is usually so dense that the air a few feet above the ground can rarely move rapidly enough to carry even so light a substance as pollen. The weevils are found in great numbers in male cones at the time pollen is shed in April. At this time the cones emitts a faint but distinct odour and visiting weevils, mating upon the cones and feeding on pollen, become so covered with pollen that much of it adheres to their bodies and remains there for 60 hours or so. Female plants develop fleshy dark red seeds that are eaten and distributed by the purple-crested lourie (Tauraco porphyreolophus) and by the trumpeter hornbill (Bycanistes bucinator). In KwaZulu-Natal, young seedlings are found in abundance growing on the steep, forested slopes which are obviously distributed by these birds. There is some evidence of collecting for ornamental purposes but this is a fast growing species that is easy to cultivate. There is also some degree of habitat loss as a result of land clearing for agricultural purposes. This species was described by C H Lemaire in 1867. In the 1800s this species was exported in large numbers and can be found growing in many conservatories in Europe.

Description: Encephalartos villosus is a dwarf cycad species that has an almost entirely subterranean stem, it's crown supporting spreading 3 metres pinnate glossy dark green leaves. The rachis recurves gracefully making it one of the most attractive foliage Encephalartos. The leaves are covered with white hairs when freshly unfurled. Old specimens form multi-headed clumps. As with all cycads this species is dioecious. Male plants may carry up to 8 cones, whereas only one or two occur on the females.
Derivation of specific name: The specific name 'villosus' = hairy refers to the dense layer of hair that covers the petiole and leaflets when the new leaves emerge.
Stem: Almost entirely subterranean and not developed, with only the crown above ground. The stem, when exposed, is usually unbranched and may be 30 to 40 cm high and 30 cm in diameter with the occasional sucker and very densely woolly-villous with woolly bracts 5-7 cm long.
Leaves (fronds): Dark green, highly glossy, usually few in a crown, suberect, and slightly arcuate above, 1.5-3 metres or more long recurved, slightly keeled or flat in section (opposing leaflets inserted at 150-180° on rachis). Petiole, rhachis and leaflets densely woolly-villous when young, becoming glabrous or nearly so except for woolly pulvinus. Rachis green, straight, stiff, not spirally twisted. Petiole 20–50 cm. long, with 6-12 spines. Leaf-base collar not present. Leaflets numerous, 15 to 25 cm long, 1 ,5 to 2 cm cm wide, linear or narrowly oblong, ± straight, not overlapping, spreading and slightly recurved towards the tip of the of the frond, strongly discolorous, the lower ones gradually and markedly reduced to prickles, the middle and upper pungent-pointed, margin usually with 1–3(-5) ascending spines on either side more closely set apically, the broadest about 25-nerved, nerves slightly prominent below. There is a considerable geographical variation in leaflet lengths and the number of teeth on the leaflets. Those of the Eastern Cape have short, more toothed leaflets, while those of Zululand and further north have longer leaflets which are usually entire.
Male cones: 1 to 8(-15) on a crown on stout peduncles up to about 20 cm long and 2-5-5 cm diameter. The cones are thinly pale brown tomentose when very young, glabrescent and yellowish later, slender, cylindric, or narrowly ovoid, slightly tapering to the apex, about 60-70 cm long and 6.5-15 cm in diameter. Median cone-scales , about 2.5 across, glabrous, ascending with the head deflexed so that the terminal facet is retained in a plane parallel to the axis of the cone; head rhombic with a rounded dentate adaxial margin, terminal facet rhombic and flat. The male cone has an unpleasant odour when mature.
Female cones: Seed cones 1-2(-4) on a crown, pedunculate, 30 to 40(-50) cm long and (12-)20 to 25 cm across, more ellipsoid or subovoid in outline, shorter and about twice as thick as the male, glossy greenish-yellow to orange-yellow when ripe. Median cone-scales 4-4.5 cm long, straight, overlapping the scale below, with the head much inflated; head elliptic-rhomboid with somewhat blunted edges; adaxial margin rounded and medially dentate, terminal facet deflexed the lower margin more or less irregularly fringed.
Seeds: Glossy crimson to scarlet, a nearly as broad as long, oblong-ellipsoid, bout 2.5-5 cm long, 1-8-2.5 cm diameters with fleshy apex.
Seedling: Leaflets about 8 pairs, oblong-oblanceolate, about 5 cm long and 8 mm broad, toothed mainly in the upper half; aerial roots well developed and much branched; crown of seedling softly villous.
Related species: Encephalartos villosus is closely related to Encephalartos umbeluziensis, but it has basal leaflets reduced to spines while E. umbeluziensis has a bare petiole. The leaves of E. villosus are recurved, while those of E. umbeluziensis are straight. The female and male cones of E. villosus are larger. 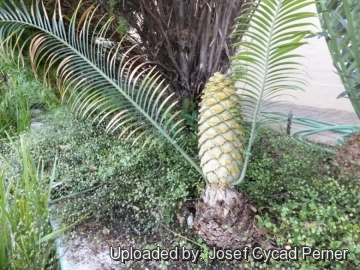 Encephalartos villosus Photo by: Josef Cycad Perner
Send a photo of this plant.

Cultivation and Propagation: Encephalartos villosus needs a moist, well-drained, frost-free position, in filtered sun and shady conditions. As a garden subject, it is one of the most spectacular of all cycad species and is quite adaptable in cultivation. When young they can be grown as a container plant and eventually transplanted into the garden. As a garden plant, this cycad will usually hold two or three crowns of leaves, all in good condition. Likes lots of water in the growing season. It is one of the most common ornamental dwarf cycads in southern Africa. E. villosus is one of the most common cycads in cultivation in southern Africa and does not sell at a high price as some of the rarer species do. Hence the common name poor man's cycad.
Growing rate:This species is a fast grower and in 5 to 8 years will develop into a substantial plant. It responds well to cultivation provided it is grown in light shade, is well drained, with sufficient moisture in frost-free conditions. It is best to grow young seedlings on until the leaves are about a metre high before planting in the open ground. E. villosus is an excellent species for landscaping as it develops into a substantial feature plant with a spread of up to 6 m across.
Soils: It grows in all sorts of soil type, but prefer well drained, gritty soil with plenty of water, especially in dry weather.
Transplanting: This species transplants easily as a mature plant, although it is recommended to remove all of the leaves before doing so. This makes for easier handling and the plant will recover sooner due to less moisture loss.
Exposure: It thrives and grows best in filtered sun or shade. When grown in full sun, the leaves are a little shorter and less likely to be damaged by wind. The leaves of those plants grown in the shade may become to 4 m in length and the leaflet span may be 45 cm.
stretched out and damage the caudex if they break off close to their base.
Waterings: In cultivation prefers moist soil with good drainage for optimal growth. But it is eventually drought resistant. Irrigation systems can be detrimental to cycads, damaging the leaves and stems from the pressure of the water as well as over-watering.
Fertilization: Naturally undemanding for nutrients, it responds very well to regular applications of fertilizer. Growth can be greatly improved through the application of fertilizers. Most growers find that a fertilizer having an even NPK (Nitrogen, Phosphorus, Potassium) balance, and supplemental trace elements, provides a good start for cycads.
Wind tolerance: It prefers a sheltered position providing protection from the prevailing winds.
Hardiness: It is suited to subtropical and warm temperate regions. Frost burns the leaves but will not easily kill established plants.
Propagation: It may be propagated by seeds. They are among the easiest plants to germinate, but appears to need shade for successful germination. It is sown on a bed of clean coarse sand which has a bottom heat of 25-28°C. The seeds are pushed into the sand so as that they are level with the surface of the sand. Water each day and within two months the seeds begin to germinate by producing a root followed by leaves. Within10 months the seedlings are removed and potted into a 3 litre plastic sleeve containing a well-drained growing medium which contains some agricultural lime. Within a year these seedlings need to be repotted into 30 cm pots to encourage the plants to develop. Keeping encephalartos in small containers prevents them from growing. Once in the open ground they develop well.
Known hazards: Many members of the Zamiaceae are poisonous, producing toxic glycosides known as cycasins, one should use gloves when handling or cleaning them.