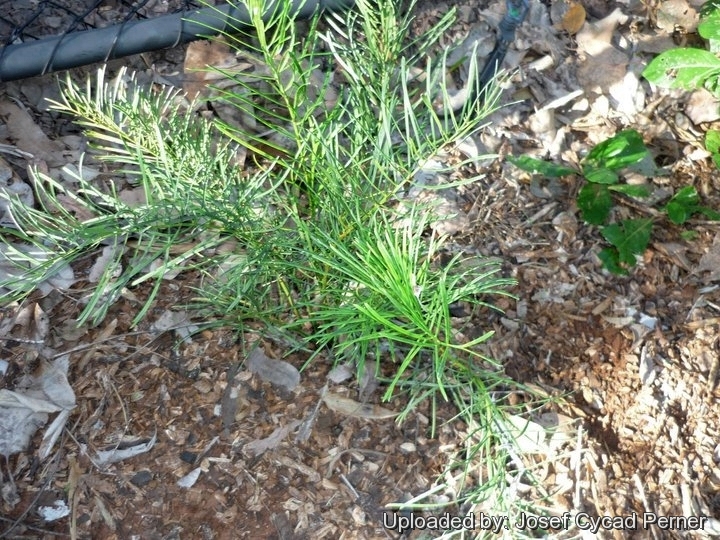 Origin and Habitat: Macrozamia stenomera is endemic to the Northern Tablelands and the Nandewar Range of New South Wales in an area centred principally around Mt Kaputar, spilling over into districts where Macrozamia heteromera occurs.
Altitude range: 200- 1,450 metres above sea level.
Habitat and ecology: Macrozamia stenomera grows in a pattern of scattered individual plants or, occasionally, small groups of plants, in dry sclerophyll forest on stony but sandy hillsides; chiefly around the Nandewar Range. Annual average rainfall of 660-1200 mm more frequent in summer but spread evenly (on a seasonal basis) over the rest of the year. Daily temperatures ranges from a minimum winter of – 0 to -10°C (depending on altitude), and summer maximum around 37°C. Frosts occur on an average of 29 days per year. The temperature on the upper altitudes of the ranges can be up to 10°C Cooler. In the north-facing basalt slopes of Mt Kaputar, at an elevation of about 1,450 metres it is thus a true mountain dweller and is subject to extreme weather conditions. Bushfires occur periodically on Mt Kaputar but, fortunately for the environment, it is generally a low intensity fire. Snow gums (Eucalyptus pauciflora) flourish above 1,350 metres. High winds, frequent frosts and occasional snow (4/5 times per year) are also encountered on the upper altitudes of Mt Kaputar. On the higher parts of Mt Kaputar, where M. stenomera grows, the vegetation is made up of a heath-like understorey on exposed shallow soils and sub-alpine woodland on deeper soils, whereas it also grows in much hotter and much drier conditions in sandy soil on the plains near Narrabri.

Description: Macrozamia stenomera is a small cycad with somewhat unique strongly twisted “plumose” fronds 40 to 80 cm long with narrow-linear pinnae (leaflets) which are multi-divided (forked 1-4 times into equal parts) and bases of pinnae a burnt yellow colour. These lines of colour where the pinnae meet the rachis are not noticeable through many Macrozamia species. The multi-divided pinnae give the fronds of M. stenomera a very bushy look remisicent of a conifer. It produces a subterranean caudex up to 20 cm long and 15 cm in diameter from which up to ten upright new fronds are produced every year. There are two basic varieties of this species, one with green leaves and one with a blue-green cast. The latter are the more sought after, though both are spectacular plants.
Similar species: Macrozamia stenomera has often been mistaken for Macrozamia heteromera and has even been listed as a variety of it.
Stem (caudex): Ovoid, mostly subterranean and normally unbranched 10-20 cm long and 8-15 cm wide.
Leaves(fronds): (2-)4-10(-14) in an erect to spreading crown, 40-80(-90) cm long, 10-15 cm wide, initially a very distinctive light green colour, but which undergo a colour transformation with age and ultimately change to a faded greyish-green or glaucous powdery-blue. Rachis slightly to strongly twisted up to 360°, sometimes irregularly, often with a moderately curved apical section. Pinnae (leaflets) 70-120, narrow-linear, stiff to rigid, 10-20 cm long, entire or more usually forked 1-4 times (all leaves have dichotomous pinnae and often each of these dichotomies itself is dichotomously divided; thus, they divide multiple times, except towards the tip of the frond when the last few pinnae are usually entire. The pinnae have a short stem that twist at an angle of approximately 70 degrees so that they face upwards towards the apex of the frond. The stem then divides into two main V-shaped "arms". A variable number of further divisions then occurs, ultimately producing somewhere between 4 and 13 sub-leaflets. As a consequence, the sub-leaflets are densely crowded and overlap each other and accentuate the bushy look of the multi-divided pinnae), primary segments 2-4 mm wide, more divided segments 1-3 mm wide, with a yellow or orange callous base. The division of the pinnae is also evident in juvenile plants though the divisions are not as numerous, except for the first leaf of the seedlings. Lower leaflets not spine-like. Petiole 7-15 cm long.
Male cones: 1 to 4 in a crown, 2-20 cm long, 4-5 cm in diameter, spines to 1.4 cm long.
Female cones: Usually solitary, but sometimes two cones are produced,10-25 cm long, 8-12 cm in diameter, longest spines 1-2 cm long. Cones appears irregularly in Dec-Jan and are similar to Macrozamia heteromera.
Seeds: 2-3.5 cm long, with red or yellow coloured flesh. The yellow seeds are an attractive lemon yellow colour, sometimes with a green segment where the sporophylls have opened up, exposing the seeds, prior to the cone disintegrating.
Related species: M. stenomera is related to the larger Macrozamia glaucophylla and, to a lesser extent, to Macrozamia heteromera. All three species have divided pinnae, but M. stenomera with its narrower, multi-divided pinnae is easily identifiable when compared with either Macrozamia glaucophylla or Macrozamia heteromera . In addition, from a strictly botanical point of view, M. stenomera has hypostomatic pinnae (with stomata on the lower surface only), whereas Macrozamia glaucophylla and Macrozamia heteromera both have amphistomatic pinnae (with stomata on both upper and lower surfaces). 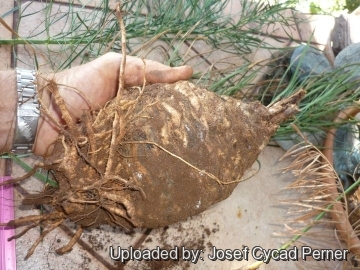 Macrozamia stenomera Photo by: Josef Cycad Perner
Send a photo of this plant.

Cultivation and Propagation: Macrozamia stenomera is easy to grow and suitable for well drained sites in temperate or subtropical areas and will tolerate cool conditions in winter, as well as moderate frosts and does well in both wet and drought environments. Well-grown plants have a distinctive ornamental appearance. This plant may be cultivated as an indoor plant in temperate countries. It is difficult o get plants out of Australia, and seed is hard to come by on this species.
Exposition: It can be grown in full sun to partial shade, best with some protection from afternoon heat but not in constant deep shade. Generally speaking the plants that are in hot, full sun grows faster and looks slightly blue-green. Shadier habitats make it look limey green and more ordinary.
Soil: Needs a well drained sandy or sandy loam spot, with deep soil, neutral or basic (tolerate limestone) but will still thrive in less than ideal conditions. Mulch with organic materials (bark or leaf mould).
Moisture: Water when dry. Drought tolerant.
Fertilization. Because of its growth habit, fertilize only when terminal bud begins to swell, indicating the start of the annual growth cycle.
Hardiness: It should be protected from extreme cold. (USDA Zones 9-11). Though it can handle some frost and snow.
Maintenance: Minimal; removal of offsets if desired, removal of spent fronds
Use: Landscape as cultivated perennial in warm, coastal areas, it makes a great accent or specimen plant and can be used in beachside plantings. Several can be planted together for a lush, tropical effect. Plant on three to five-foot-centers to create a mass planting. Use near the patio, in mixed foundation plantings or in perennial beds. It is a spectacular house-plant or interior-scape specimen in cool areas tough enough to survive occasional neglect and harsh indoor environments. It is very well suited to bonsai culture.
Warning: This plant is poisonous, producing a toxin called cycasin that affects the gastrointestinal tract and nervous system.
Propagation: Seeds. The germination process is slow and difficult to achieve in cultivation, after fertile seeds are collected, they usually need several months of storage before the inner embryo is ready to germinate. Therefore, it is best to clean the seeds of external fruit and set them aside before attempting to propagate the seeds. Seeds should be sown in shallow container, lightly covered with sand, and after germination, potted off in small pots of moderately rich, light soil. The growing plants do best in partial shade.