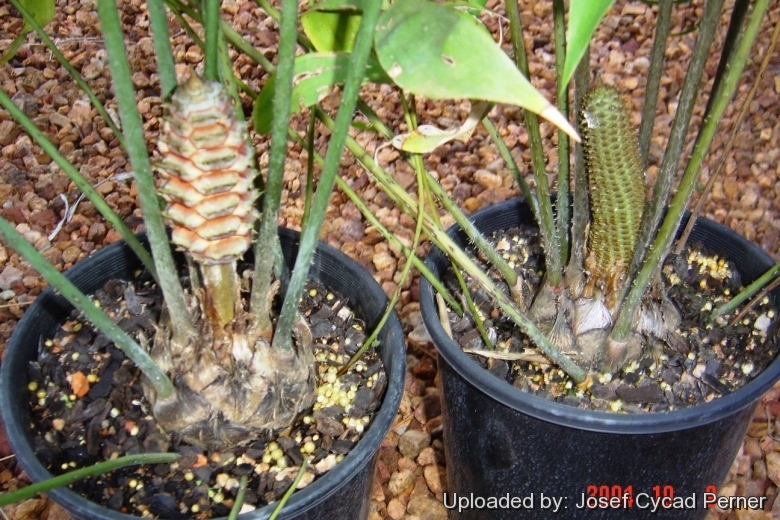 Origin and Habitat: Ceratozamia hildae has a sporadic distribution in the bordering ranges of Querétaro and San Luis Potosí states, Mexico where it is found in the region of the Huasteca Potosina near the Santa Maria river. Number of mature individuals between 500 and 1000.
Altitude range: 850-1300 metres above sea level.
Habitat and Ecology: This species occurs in the cloud zone in deciduous oak (Quercus) woodlands. Plants grow in heavy black clay and among limestone rocks. Often it occurs with other cycads such as Zamia fischeri and Dioon edule. Generation Length 45 years. Ceratozamia hildae is one of many species of Mexican cycad commercially exploited and is a prime example of a plant seriously threatened by trade. It is estimated that thousands of plants were removed from habitat and that only small and scattered subpopulations remain. Ceratozamia hildae is critically endangered and near to extinction in the wild, although abundant in cultivation.

Description: The bamboo cycad (Ceratozamia hildae) is an acaulescent fernlike perennial plant. It is unique among cycads, having as many as three or occasionally five or six (or more) fasciculate leaflets clustered at the nodes along the rachis (arising from a single point in a whorl and appearing as though they are divided) giving this cycad bamboo like appearance. Rarely do individual leaves with non-clustered leaflets occur except in young plants. Occasionally clustered leaflets occur also in Ceratozamia latifolia. The leaves may be up to 1.5 meters in length. Additionally the leaflets are thin and papery rather than thick and leathery, like other Ceratozamias. Moreover some leaves may be devoid of prickles while others are densely prickly even on the same plant. The arrangement of the leaflets in clusters on the rachis is its most striking feature and separates this species within the genus.
Derivation of specific name: The specific name "hildae" honors Hilda Guerra Walker, daughter of the commercial Collector Luciano Guerra who first collected this plant in the 1950s. This species became widespread and abundant in cultivation before being described from cultivated plants. Ceratozamia hildae was not formally named until 1979.
Stem: This species forms a short above ground stem, as do most Ceratozamias. The stem may eventually reach a height of 10-20(-30) cm and diameter of 5-25(-30) cm. These stems are covered with persistent, hard, armored leaf bases. Ceratozamia hildae grows quickly, and often develops a branched underground stem for several years before develops a slender trunk to about 15 cm tall and 12 cm across. These lateral, underground stems will eventually surface. In very old specimens with several stems of similar size, it is often impossible to determine which was the original stem.
Leaves (fronds): 5-20 in crown. Young leaves emerging bronze, red or chocolate brown, or mid-green and hairy. Mature leaves 1-1.5 m long, light or bright green, semiglossy, smooth, glabrous, flat (not keeled) in section. Petiole 20-30 cm long, woolly at the base, armed with prickles. Leaflets 20-50 on each leaf, 7-22 cm long, 1-5 cm wide, lanceolate, asymmetric, broadest above middle, falcate, spreading to recurved, clustered at the nodes along the rachis in groups of 3 to 6 (occasionally up to12), thin-textured, somewhat papery, weakly discolorous, light green above, silvery beneath, venation straight, margins flat, apex acute. Rachis not or slightly spirally twisted. The first through third seedling leaves of C. hildae generally have from one to three pairs of opposite leaflets resembling other species of Ceratozarnia. It is not until the third leaf is produced that clustered leaflets appear along the rachis distinguishing the plants as C. hildae. Occasionally some specimens retain opposite leaflet arrangement.
Male cones: 18-25 cm long, 2-3 cm wide, fusiform-cylindrical, yellow-green to yellowish brown; sporophylls with two horns to 3 mm long. Peduncle to 3.5cm long, slightly woolly.
Female cones: (6-)10-14(-20) cm long, 3-5 cm wide, narrowly ovoid-cilindrical to cylindrical, yellow-green to olive green; sporophylls with two large horns, separated by a prominent oval ridge. Peduncle to 9 cm long. Individual pollinated cones yield as many as 40 seeds per cone.
Seeds: 18-20 mm long, 15 cm wide, ovoid, smooth. Sarcotesta white, ageing to brown.
Phenology: Both pollen and seed cones are produced singly from February to April. Pollination can occur from mid-April to early June. Seed cone maturation requires approximately nine months. Each year, cones which have been pollinated in April and May disintegrate with ripened seeds in November and December. Female plants in which seed production has occurred generally produce new seed cones within a short period (2-3 months) following the disintegration of the previous cone. 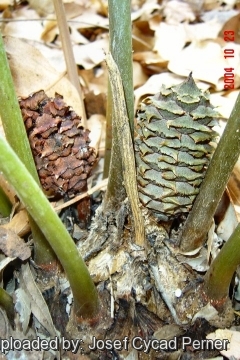 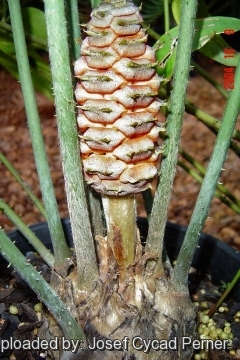 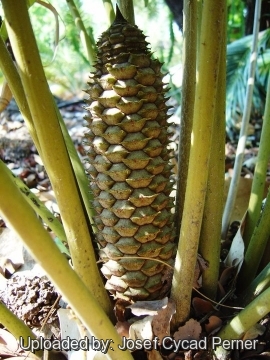 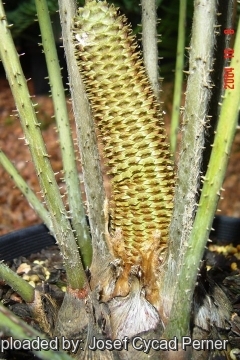 Cultivation and Propagation: Ceratozamia hildae is a fern-like plant with long, arching fronds, with new growth emerging pinkish or coppery green. It's a beauty and one of the best landscape plants in the genus. It prefers to be in half-shade in sheltered conditions to look its best and germinates readily from seed. It has proven to be very cold and frost hardy. It grows fairly fast, reacts well to fertilizer applications and reaches adult size taking about five years under ideal conditions to produce cones. It is one of the most easily grown and adaptable cycads in cultivation. C. hildae is tolerant of virtually any growing regime. Not common in cultivation but available at specialty nurseries. Makes an attractive subject for containers. Certainly no other Ceratozamia received as much attention by the nursery trade as Ceratozarnia hildae.
Exposition: It prefers bright light exposure but thrives in either shade or full sun; best with some protection from afternoon heat but not in constant deep shade. The amount of light only seems to affect the overall leaf length.
Soil: Needs a neutral or slightly alkaline, well drained sandy soil spot, with deep soil, but will still thrive in less than ideal conditions. Mulch with organic materials (bark or leaf mould).
Moisture: Water when dry. Drought tolerant.
Fertilization. Because of its growth habit, fertilize only when terminal bud begins to swell, indicating the start of the annual growth cycle.
Hardiness: Ceratozamia hildae is remarkably cold tolerant. It should be protected from extreme cold , but it is much hardier than you might think. Plants survive freezing conditions as low as -9° C for short periods of time, regularly enduring temperature well below -1° C each winter. In most cases the foliage is completely undamaged by such freezes but occasional leaf burning may occur. Small plants appear to be more tolerant of severe cold than large, old specimens.
Maintenance: Minimal; removal of offsets if desired, removal of spent fronds
Use: Landscape as cultivated perennial in warm areas, it makes a great accent or specimen plant. Several can be planted together for a lush, tropical effect. Plant on three to five-foot-centers to create a mass planting. Use near the patio, in mixed foundation plantings or in perennial beds. It is a spectacular house-plant or interior-scape specimen in cool areas tough enough to survive occasional neglect and harsh indoor environments.
Warning: All parts of the plant are poisonous to animals and humans. The toxicity causes liver and kidney failure, as well as eventual paralysis. Dehydration sets in very quickly. No treatment for the poisoning is currently known. Poisonous Parts: Fleshy seeds, leaves. Protect pets and instruct children to never eat or chew any plant material without permission.
Propagation: Seeds. The seeds are covered with a light yellow pulp. This rots quickly rather than drying hard, once seeds have been released from the cone, allowing the seeds to be easily cleaned. Seed production can be increased with hand pollination. Fresh seeds germinate within 90 days after planting. Seeds should be sown in shallow container, lightly covered with sand, and after germination, potted off in small pots of moderately rich, light soil. The growing plants do best in partial shade. The old plants occasionally send up suckers around the base of the trunk. These may be taken off when in a dormant state and rooted, care being taken to remove the leaves to guard against excessive transpiration. The advantage of the "pups" is that you will know its sex, for seedlings you will have to wait several years until the plant flowers to find out.