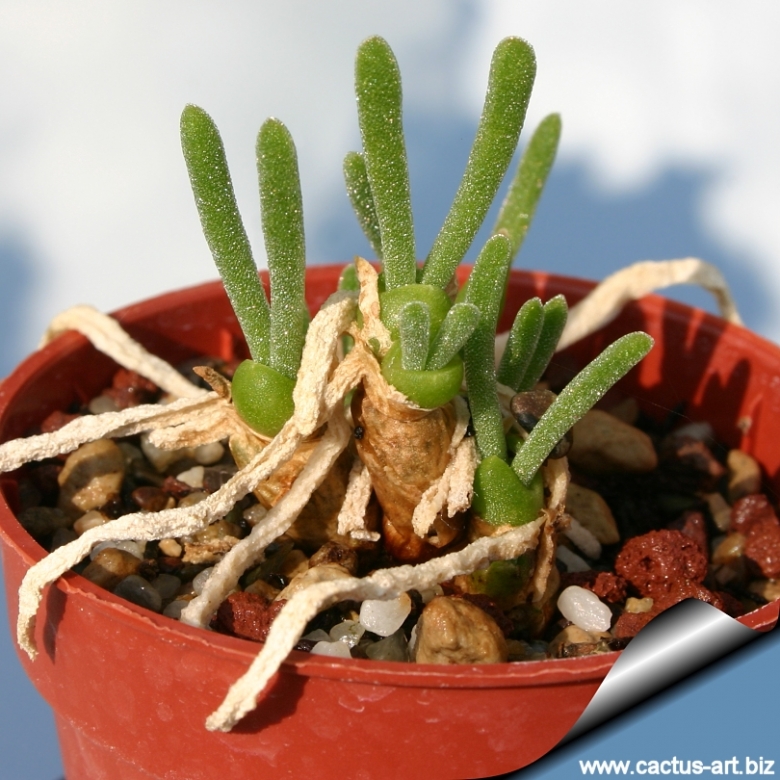 Monilaria obconica Photo by: Cactus Art
The small glittering pearls on the leaves are special water storage cells rich in sugars characteristic of succulents, in Monilaria these cells may be ½ a mm in diameter and can retain their moisture for weeks when separated and exposed to dry air. It is a very interesting and easily flowered plant with brilliant green spaghetti leaves.

Description: It is a smallish clump-forming succulent plant. It is a seasonal deciduous species and has also both succulent leaves and stems.
Stem: Short branched with a beaded structure.
Leaves: Spaghetti-like green that eventually turn red in sun. The small glittering pearls on the epidermis are special water storage cells rich in sugars characteristic of succulents, in Monilaria these cells may be half a mm in diameter and can retain their moisture for weeks when separated and exposed to dry air.
The possession of two different leaf forms (heterophylly) is a also a distictive characteristic of Monillaria (and of Mitrophyllum) the leaf pair formed at the start of the dormant season being more united and compact than that formed when in full growth, and acting as a protective sheath to the stem apex.
Flowers: It has spectacular rose flowers.
Note: Monilarias are unlike any other in that each year one small bead-shaped leaf persists as the stem. Growing only one ”bead“ each year makes it very easy to guess how old a plant may be. 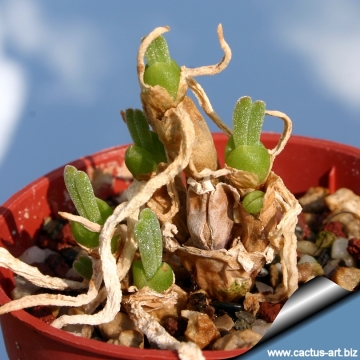 New signs of turgidity and green colour at their extremities in autumn after the summer resting period. Photo by: Cactus Art 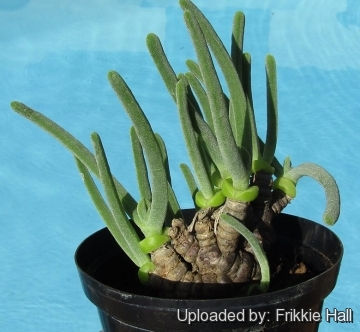 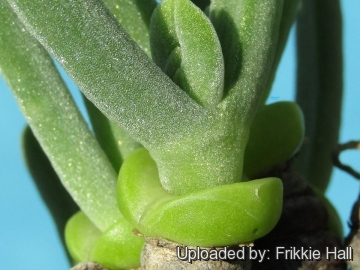 Monilaria obconica Photo by: Frikkie Hall
Send a photo of this plant.

Cultivation and Propagation: It is relatively easy to grow. These plants grow on winter rain and head for summer dormancy. The growing season in northern hemisphere is from September to March. Water minimally in summer. Water regularly in winter after the new long green leaves appears at their extremities in autumn after the summer resting period. Requires good drainage. It enjoy some shade (avoid direct sun as it grows wild among rocks and under the shade of other plants) and in summer it need to be kept in a cool area. Hardy to -2°C. Ensure a very good ventilation. Avoid to repot frequently. This plant may stay in the same pot for many years. Plants grown in larger containers have frequently relatively poor flowers. It might improve when the plants are given their own, small individual pots.
Be careful not to apply too much fertilizer
Propagation: It can be reproduced both by cuttings and seeds. Take the cutting from a grown-up mother plant. Each cutting must contain one or more branches along with a fraction of root.