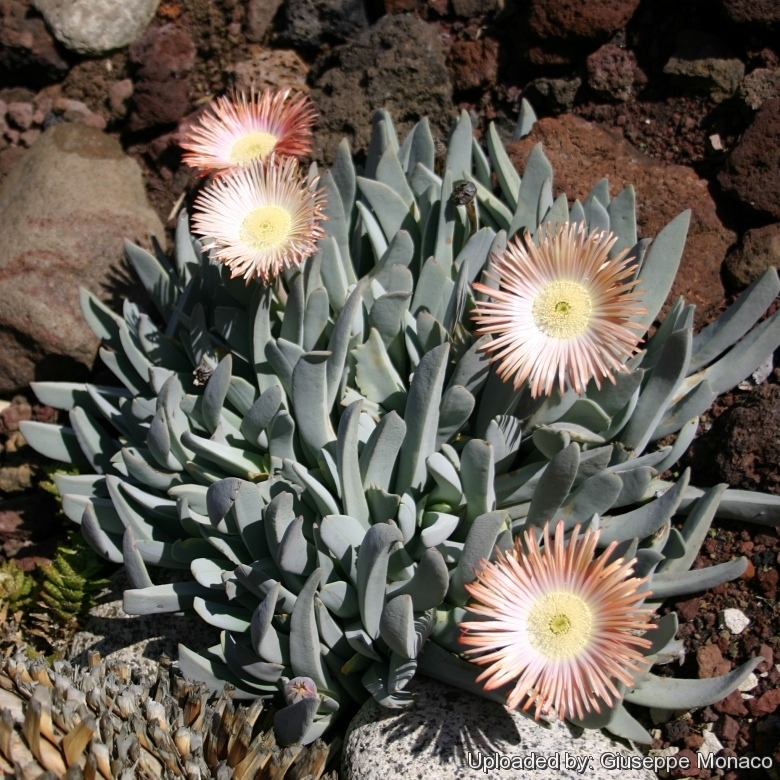 Cheiridopsis denticulata Photo by: Giuseppe Monaco
A plant grown outdoors on volcanic soil in the town of Viagrande, 15 km from Catania, Sicily, Italy on the foothills of Mount Etna at an elevation of 380-450 meters above sea level. The climate is Mediterranean, the spring and summer are hot with significant thermal excursion between day and night up to 20 ° C. The winter is cool and rainy, temperature rarely drops close to zero during the night, some sprinkling of snow may be expected, but they are very rare and of short duration.

Origin and Habitat: Cheiridopsis denticulata comes from Namaqualand and the Richtersveld, in the western part of the Northern Cape, Cape Province of South Africa and the range extends to Lüderitz, in southern Namibia. The largest concentration of the species is in the vicinity of Stinkpot and Platbakkies in Namaqualand.
Altitude: Around 300 metres above sea level.
Habitat and Ecology: It normally grows in small, almost pure stands in sandy flats, often in dry river beds, on gneiss and granite of the Namaqualand complex, mainly in winter rainfall region with hot, dry summers, but also in areas with autumn or spring rainfall (March and November rains). Precipitations 100-200 mm per annum.

Description: Cheiridopsis denticulata (including Cheiridopsis candissima, which is still sometimes seen as a separate species) is a perennial, compact, cushion-forming succulent that can get quite large (up to 10 cm tall and about 30 cm across). It has grey-white leaves which may be simple or somewhat toothed on the keel from which its name derives. It is perhaps the hardiest member of its genus.
Leaves: Opposite, in one or two, sometimes three, erect pairs on short ground-level branches. Leaves up to 6,5 cm long and 1 cm broad. Often the leaf pairs are dissimilar or unequal and fused for up to 1 cm (less than 40% connate), triangular in cross section towards tip, grey to bluish green with papillae of 2 size classes, dotted, with a slightly wrinkled surface, more so in dry conditions. Tip mucronate (pointed), keel less than one-quarter of the leaf length: at least some leaves on each plant with toothed keels. Teeth few relatively large, dull.
Flowers: Up to 8 cm in diameter, cream to pale yellow (but also yellow, orange or white), often violet to red at tips and outside. Bracts attached in lower one-third of pedicel (flower-stalk). Sepals four or five. Stamens numerous.
Fruits (dry capsules): 50-100 mm long, up to 13 mm in diameter, shortly funnel-shaped, cone-shaped or hemispherical below, flat, to cone-shaped above, in particular after the first opening. Cells more than (8-)14 (usually 17-19). The capsules of Cheiridopsis denticulata have covering membranes undulate with a low distal rim and a particularly large closing body.
Blooming season: Late winter. The flowers open during the afternoon and are pollinated by bees.
Seeds: Smooth, whitish to brownish, micropyle elongate, 0.8-0.9 mm long, 0.4-0.5 mm broad, 0.4-0.45 mm thick. When it rains the capsules open.
Chromosome number: 2n = 36.
Growth phases: The plants go dormant in summer but do not die back to rootstock. They become more compact, the older leaves wither forming a protective sheath at the base (Cheires = sleeve) and the new leaves emerging but remaining compact, waiting for the rain when they grow again. They in other words recycle their moisture from the older to the younger leaf pair, but do not become deciduous.
Note: The irregular formation of teeth hinders the identification of C. denticulata if only little material is available; toothless leaves can be confused with those of Cheiridopsis robusta. Both species occur allopatrically, however, and possess different chromosome numbers, but in two places hybrid populations have been found.

Subspecies, varieties, forms and cultivars of plants belonging to the Cheiridopsis denticulata group 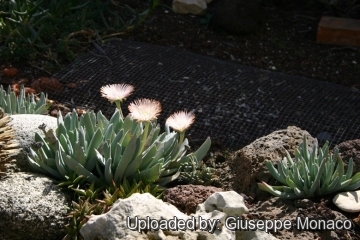 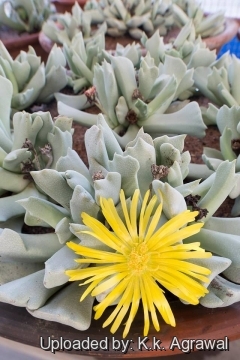 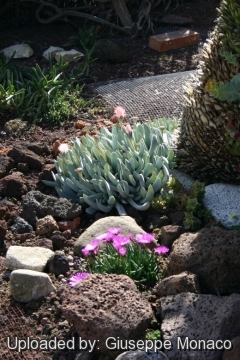 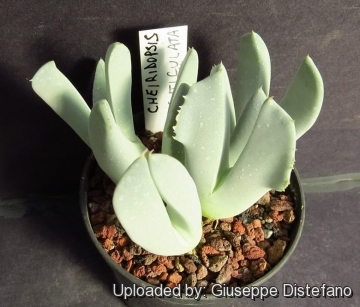 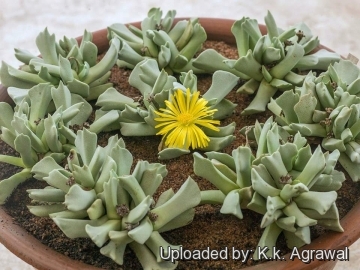 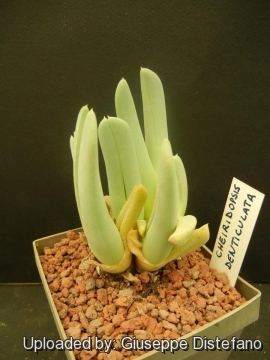 Cultivation and Propagation: The Cheiridopsis denticulata is a "winter" grower which is most active from late winter until later spring and heading for summer dormancy, but in favourable growing conditions it keeps going over the summer too and doesn't need particular care. It does well when grown in conditions similar to those in its natural habitat or in a greenhouse. It can grows outdoor in sunny, dry, rock crevices (protection against winter wet is required). It can also be cultivated in alpine house, in poor, drained soil.
Soil: It requires a sandy soil that is rich in minerals. Ensure a very good drainage as it it is prone to root rot.
Fertilization: It thrives in poor soils and seems sensitive to an excess of potassium.
Watering: Water minimally in summer, only when the plant starts shrivelling or spray them with a fine mist from time to time, water more abundantly when they are growing in the autumn and spring. Requires little water otherwise its epidermis breaks (resulting in unsightly scars).
Light: It needs a bright sunny or light shade exposure in winter, but keep cool and shaded in summer.
Hardiness: It prefer a very bright situation and will take a light frost (Hardy to -5°C) if it is in dry soil. USDA zones 9A – 11.
Uses: Container, rock garden.
Propagation: Seed in spring or cuttings. Sow seeds in autumn, and, to improve the chances of germination, place the seeds in a small container with warm water for 24 hours. This will help to soften the hard outer layer of the seeds. Sow the seeds in a sandy medium and cover them with a thin layer of fine sand about 1 mm thick. Keep them damp, using a fine spray, until seeds start to germinate in about seven to fourteen days. Once the seedlings start growing, slowly reduce the amount of water.