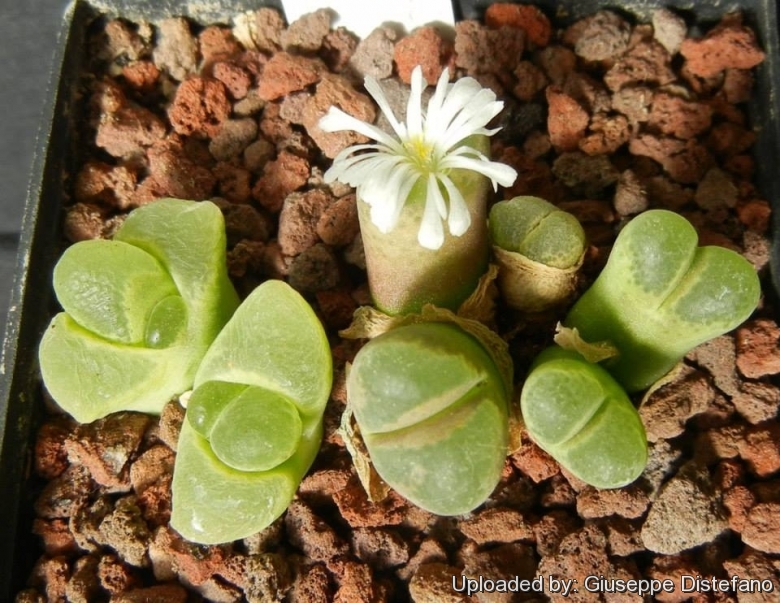 Description: Conophytum longum is the name now given to the former Ophthalmophyllum herrei Lavis. It is a miniature succulents prized by enthusiasts for its beautiful, velvety-soft, lime green bodies with striking white or pink flowers. It is one of the most free-flowering species of the whole genus.
Habit: It is a perennial-succulent, single or sparsely branched with age and forming a small mat.
Bodies (paired leaves): 20-30 mm tall, 12-20 mm wide, 5-10 (or more) mm thick, soft in substance, fused cylindric to urn-shaped, often strongly keeled, bilobed at the apex, fissure shallow, upper face irregularly convex, pale yellowish-green to dark-green (never brown) velvety, windowed and papillate; smaller windows usually murky. Sheath yellowish-brown, thin and brittle.
Flowers: Bracteoles rounded and succulent, petals white to pink. Flowers are strongly scented
Fruits: 5-7-chambered.
Remarks: This species along with Conophytum lydiae, Conophytum praesectum and Conophytum friedrichiae have been defined from a complex of populations across the Northern Cape and assigning a name to any population can be tricky. However the green-bodied forms with pale flowers that grow in the western end of the distribution tend to be known as Conophytum longum. Note the velvety texture of the leaves that is associated with all four species. Conophytum longum is also the most widely grown member of Conophytum/Ophthalmophyllum; unfortunately it readily hybridizes with every other species of the section kept in cultivation, producing unidentifiable offsprings.

Subspecies, varieties, forms and cultivars of plants belonging to the Ophthalmophyllum longum group 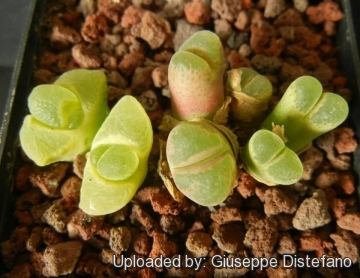 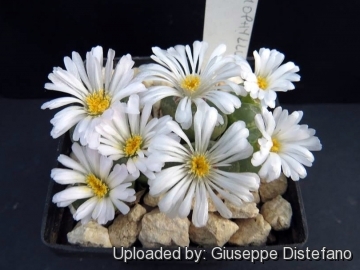 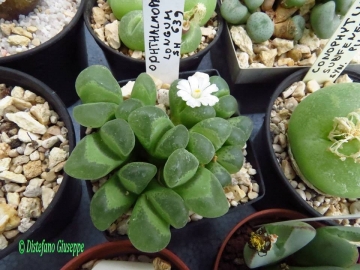 Conophytum longum Photo by: Giuseppe Distefano
Send a photo of this plant.