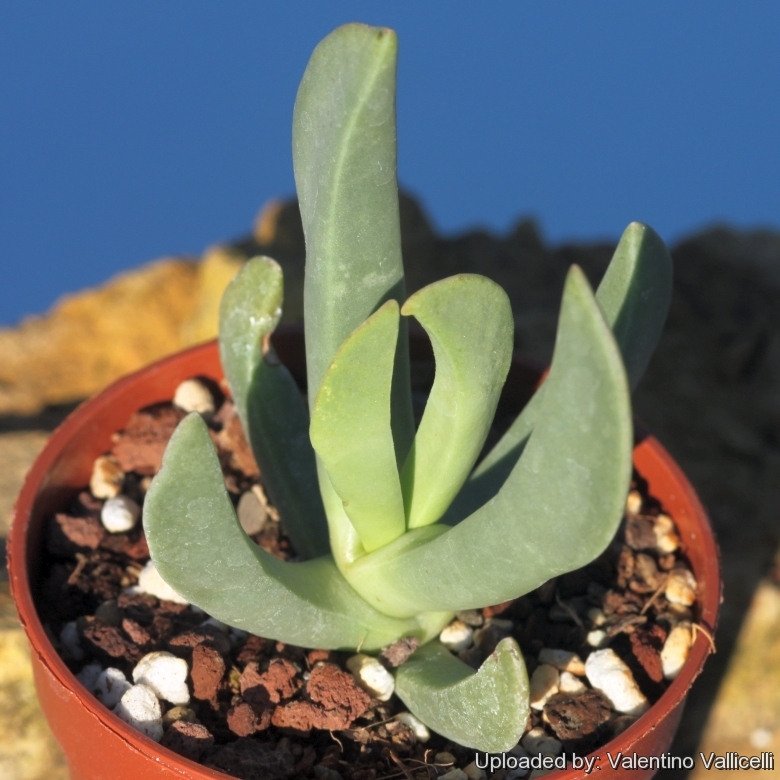 Origin and Habitat: Ruschianthus falcatus is endemic to a small area near Namuskluft, Lüderitz Distr, Namibia [southern edge of the Namib desert]. This species is known from only one population dispersed over five slopes, very close to one another. Extent of occurrence is less than 1 km². Population size is thought to be less than 500 plants.
Altitude range: Around 2000 metres.
Habitat and Ecology: This species grows in rocky areas. Rainfall less than 100 mm p.a. in winter, but fog is frequently present. There are no known threats to this species at present, the population is believed to currently be stable. Collecting is the only known potential threat, although the location is relatively inaccessible.

Description: Ruschianthus falcatus is a compact, tufted succulent-plant with strongly falcate leaves (laterally compressed into a sickle shape). These leaves are pinkish grey-green due to wax and crystal deposits with white patches on the slightly rough surface. It flowers in late winter to early spring and the greenish-yellow flowers each last a month and once fully opened they do not close again; the petals do not spread widely. With sufficient light, the plants look very attractive, but are not recommended for the beginner. It is the only species in the monotypic genus Ruschianthus.
Distinguish characteristics: The plants are compact and fairly small, 50-70 mm in diameter, with greenish-yellow flowers on short pedicels which are bracteate. The perianth is basally fused and the hypanthium is distinct. Bearded filamentous staminodes are present (unusual in this group) with 5 nectar glands slightly separated, the capsule is 5-locular, without covering membranes or closing bodies.
Derivation of name: Named after Ernst Rusch jun., farmer and botanical explorer in Namibia' . The specific name 'falcatus,-a,-um'; from Latin 'falx (falcis)', 'sickle'; and Latin '-formis': 'shaped', for the shape of the leaves, sickle-shaped, falcate.
Stem: Very short with up to 10 branches.
Leaves: Erect to spreading diagonally, hardly fusced at base, falcate, 30-45 mm long, 5-6 mm broad, to 18 mm thick, greyish-green with a thick wax cover.
Flowers: Solitary (rarely 2 ), inconspicuous, bracteolate, green, greenish-yellow to whitish, not opening widely in natural conditions and once fully opened they do not close again. Petals 80-90, green, spreading only a little, as permitted by the enclosing leaves. Filamentous staminodes 110-120 greenish-white, apically papillate, placed in at least two rows together with petals and stamens on a cushion surrounding the lower lying surface of the gynoeceum, thus forming a short hypanthium and a recess flower. Stamens 150-160, green, the inner almost horizontally covering the centre of the recess flower. Nectar glands five conspicuously dark green slightly separated and placed on a prominent cushion forming a ring at the bottom of the flower. Stigmas 1 mm long. Green is a rare flower colour in mesembryanthemums, even rarer than recess flowers, both features probably representing an ecological adaptation which may be related to the fact that the leaves enclose the flowers rather narrowly so that they can never open widely, as is usual within the family.
Fruits (capsules): Greyish, five locular, without covering membranes or closing bodies about 6 mm in diameter on a long pedicel. Capsules are of the Delosperma type, but with valve wings narrowing towards their base.

Cultivation and Propagation: Ruschianthus falcatus is rare in cultivation and is vaguely reminiscent of a member of the Bergeranthus group. However, the growth period of Ruschianthus is in winter, and the flowers are of greenish-white colour. Given a watering period in late fall as the new leaves begin to form, it flowers from late February through March (in northern hemisphere). After the greenish-yellow flowers have appeared, watering should be gradually decreased for a rather dry summer rest.