Duvalia corderoyi Photo by: Luiza Ferreira
Of all the duvalias, this specie is among the most distinct and has the largest flowers reaching almost 5 cm in diameter. The attractive brick-red flower is also unusual in having long purple hairs thickly covering the centre of the flower. Purplish colour simulate the rotting flesh of dead animals. These flowers attract beetles and carrion flies who pollinate the plant as they are fooled into trying to lay eggs on the flower.

Origin and Habitat: Duvalia corderoy is endemic to the dry southwestern and central regions of Southern Africa (Widespread in the Great Karoo from south-west of Fraserburg to Beaufort West, Graaff-Reinet and Cradock, continuing north-eastwards to Bloemfontein and Ficksburg in the Free State.)
Habitat and Ecology: It grows in grasslands under small bushes in flat, stony areas, often among dolerite rocks. This species is widespread, common and not declining.

Description: Duvalia corderoyi is a groundcover, clump forming perennial-succulent. This species is easily identifiable by its thick six angled stems and its fleshy and very hairy flowers. The colourful flowers up to 5 cm in diameter are relatively large for the South African species of the genera and have a bad odour. These plants grow covering the whole land at their disposal.
Stem: Stems are typical for the genus in being small and creeping. Branches, decumbent and rooting, segments globose or oblong, crowded, thick, 1.5-3 (or more under cultivation) cm long, about 12-25 mm thick, glabrous, six-angled. Angles very obtuse or somewhat obscurely toothed with small leaf rudiments and stipular denticles. Dull green, in autumn, winter it may assumes a yellow/green colouring, it also tends to redden in full sun and during the winter month.
Flowers: 2–4 together from the sides of the young stems at about the middle or near the base. Pedicels 12-25 mm long, 2 mm thick. Sepals 4-5 mm long, lanceolate, acute, glabrous.
Corolla 3-5 cm in diameter, olive-green, with darker tips, or dull reddish-brown. Corolla lobes of corolla lanceolate-acuminate, very spreading, 12-18 mm long, sometimes closely replicate for 2/3 of their length with the basal part expanded, sometimes closely replicate only at the tips and openly at the other part, along the the basal 2/3 fringed with long vibratile clavate mauve-purple hairs, light or dull olive-green, tinged towards the tips with darker, or dull reddish-brown, sometimes with a faint green tint. Annulus clothed with soft hairs of the same colour 10-12 mm in diameter, up to 4 mm deep, obscurely 5-angled, densely covered with long soft purple hairs. Outer corona 6-7 mm in diameter, pentagonal, dull brick-red, paler at the angles; inner corona-lobes ovoid, dorsally obtuse, with the inner apex narrowed into a short linear point, buff-coloured. Different coloured flowers can be produced produced on the same plant but not on the same branch.
Fruits: Flies pollinated, the flowers resulting in the typical twin seed horns (follicles), which are decorative in themselves and often don't appear until a year later.
Blooming time: Flowers are freely produced throughout the late summer and autumn.
Remarks: Duvalia corderoy is a very variable species with many different forms and clones both in the wild and in cultivation.

Notes: Duvalia is a Stapelia-like genus comprising small stem succulent plants with a creeping or mat forming habit, growing generally in the shade of shrubs. Corolla with the segments more or less replicate, and an elevated annulus (orb) on the disk; outer corona flat, entire, pentagonal, disk-like; inner corona of five small, entire, horizontal, ovoid, pointed, fleshy segments, somewhat resembling a bird's head when viewed sideways. Most of the species are natives of South Africa, but the distribution is disjunct, with section Arabica species found in the Arabian peninsula and the Horn of Africa, i.e. Saudi Arabia, Yemen, Sudan, Djibouti, Ethiopia and Somalia in the north, whilst section Duvalia comprises species from southern Africa which are found in Botswana, Malawi, Mozambique, Namibia, Zambia, Zimbabwe, and South Africa. 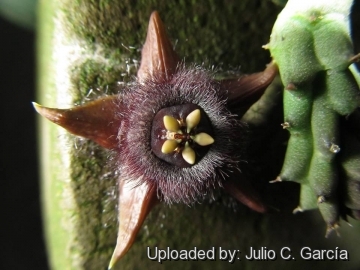 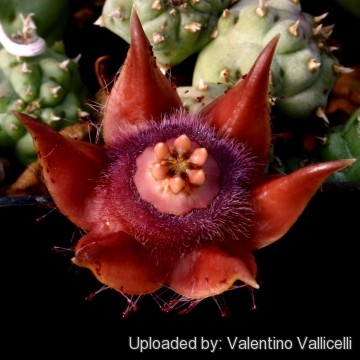 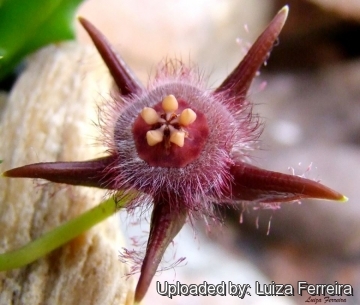 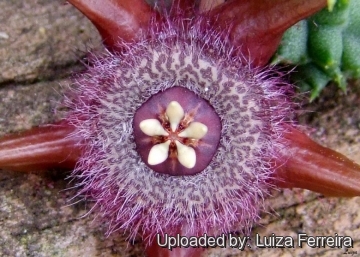 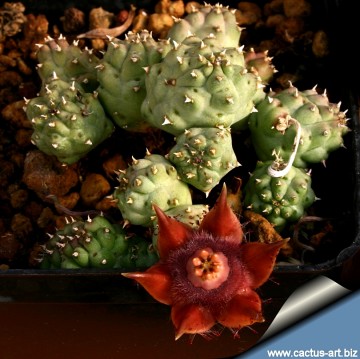 This photo shows the nice symmetry of the flower, note the purplish hairs covering the uplifted 'ring' or annulus. Photo by: Cactus Art 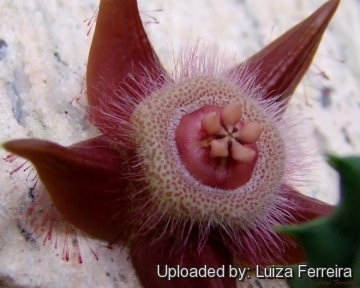 Cultivation and Propagation: Duvalia corderoyi is an easy obliging blooming plant when mature, that it is happy in any average succulent house.
Potting: Since roots are quite shallow, use a soft and incoherent cactus mix or add extra perlite or pumice to regular soil potting soil, and clay pots help the plants to dry out between watering.
Waterings: Duvalias require moderately watering through the growing season but enjoy plenty of water and some fertiliser in hot weather, this helps them to flower freely. Water more sparingly in winter according to temperatures. But, as with most asclepiads, it is unwise to leave them wet in cold weather.
Fertilization: Fertilizers for succulent plants must be rich in potassium, but poor in nitrogen, to avoid the plants from developing excess vegetation, which is easily attacked by fungal diseases.
Sun Exposure: As with many succulents, they prefer to grow in the light shade of scrubby shrubs or between rocks where they get some shade during the day. In summer it is advisable to position this plant in a partially shady place, where it is exposed to direct sunlight only during the coolest hours of the day.
Hardiness: These plants don't like cold weather, therefore in the Spring it is best to set them outside only when the temperatures are above 15°C. Can endure temperatures below 5°C for short period, but only if the soil stays completely dry.
Pest and diseases: Duvalia species vary in their susceptibility to rotting, but are generally fairly easy to grow, especially if kept pest-free. They are very susceptible to stem and root mealy bugs, and damage from these may well initiate fungal attack. If you do have problems with a stem or with basal rotting, you can reliably isolate the healthy parts, dry them off, and re-root them in moist compost.
Cultural Practices: Re-pot every 2 years.
Propagation: Easiest with stem cuttings. Allow cuttings to dry a day before planting. Stems must be laid (Not buried) on gritty compost and will then root from the underside of the stems. It can also be increased from seeds sowing in spring in moist, sandy peat moss. Barely cover seeds. Seeds germinate quickly.