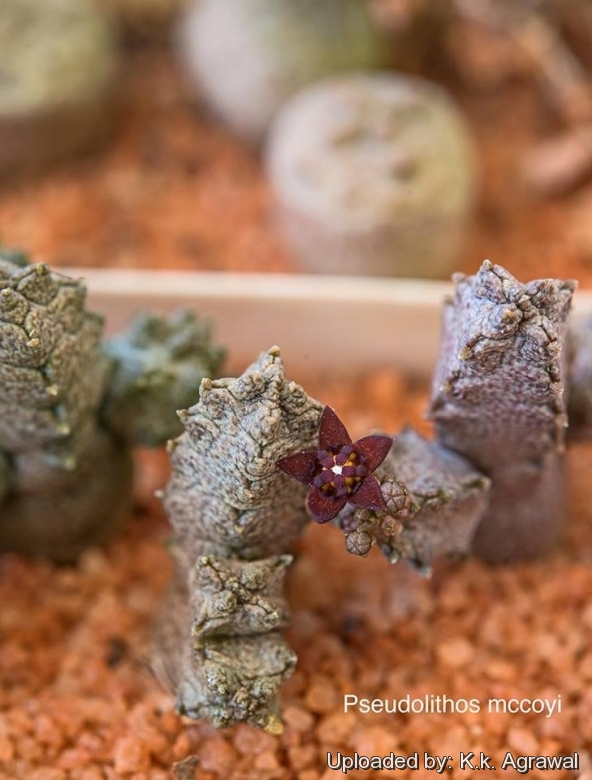 Pseudolithos mccoyi Photo by: K.k. Agrawal
Size of flower 5 mm (this flowered within 6 months from seed)

Description: Pseudolithos mccoyi is a minuscule plant, with thin, rough knobby grey, quadrangular stems, reptilian looking and supposedly tricky to cultivate. It branches from an early age, six months or so, and forms small clumps only a few cm across.
Related species: It is closely related to Pseudolithos dodsonianus but is easily distinguished by the more slender stems arising from a bulbose base, having prominent triangular podaria and the stem surface being more finely wrinkled.
Stem: Small, arm like, not like big chunks of the others members of the genus, distinctly four-sided, dark powdery brown wrinkled.
Flowers: Very small, but usually many bloom at a time, olive-green to dark maroon with dark spots, similar to those of Pseudolithos dodsonianus but the outer corolla lobes are not deeply bifid.
Fruits: Its fruits (horns) are small but numerous, adorning almost every shoot. 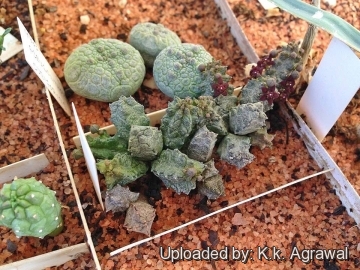 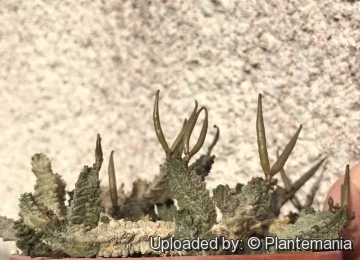 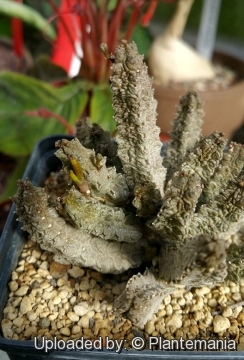 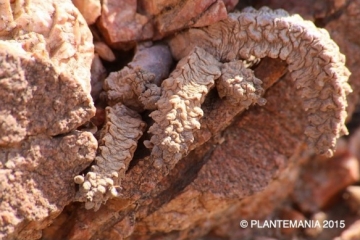 Cultivation and Propagation: This species, together with Pseudolithos caput-viperae, is one of the most difficult to keep in cultivation. It is often grown grafted and is considered tricky to keep alive on its own roots, because mistakes are costly. If rot sets in, there is practically no time, nor warning, before the plant turns to expensive mush, but if we follow the right growing tips it is not so difficult as is commonly supposed, but inaccuracies are fatal.
Soil: Use 100% mineral soil, don’t bury the base of the plant in the substrate, but place it in a horizontal position on the soil surface.
Watering: It needs regular watering, especially during the hottest summer days, provide also some light watering in winter if the green house temperatures are elevated. Either excessive and very scarce watering can induce rot.
Frost Tolerance: Winter temperatures must be kept over 10° C. ( But it can withstand a winter night temperature of around 5°, or less for short periods )
Sun Exposure: It takes great advantage if grown in very strong light but sheltered from full sun.
Special cultural practices: Provide very good ventilation. This plant is a candidate for under-potting, as long as you keep it watered.
Propagation: Usually grafted or by seeds that are however seldom available.