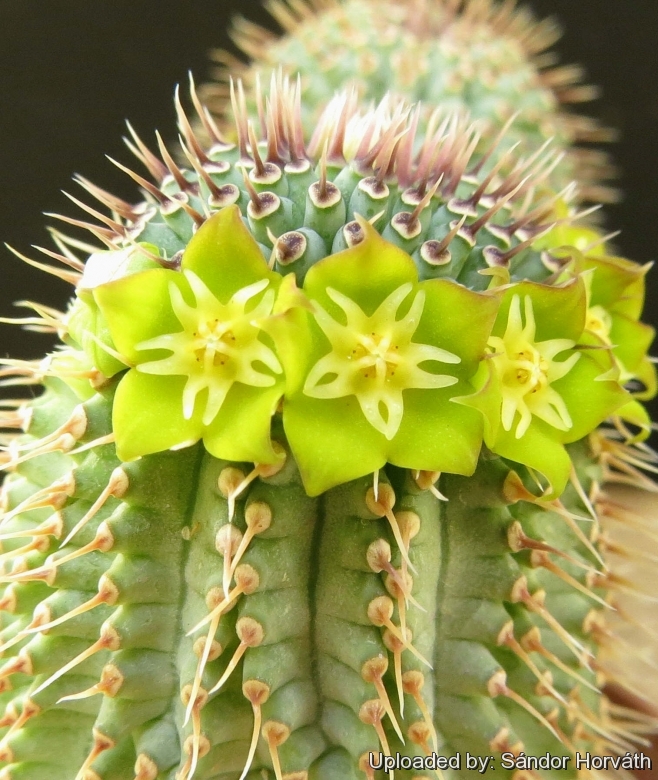 Description: Leafless and branchless, Hoodia flava is a compact succulent spiny shrublet with many cylindrical stems all arising from the base. Yellow flowers appear in Winter on the youngest parts of the plants near the top. This species is distinguished from the other Hoodia species by its small yellow flowers and its unique distribution.
Stems: 3 to many, cylindrical up to 50 cm in height, but mostly much smaller (usually 15-18 cm), 2-7 cm in diameter, grey-green, armed with 18-31 vertical rows of tubercles (mammillae), that are tipped with hard, stiff, brown or black bristles 4-7 mm long. The stems closely resemble those of Hoodia pilifera but the spines of Hoodia flava are darker.
Inflorescence: In 1-3 Flowered.
Flowers: Small, up to 12 mm in diameter, in yellow sometimes flushed brown or rarely entirely brown, disc is flat over which the the distinctive pincer-like yellow outer corona extends. Scent reminiscent of old fish.
Pedicels: 0,3-1 mm long.
Sepals: Appressed to the corolla, 2,5-3 long, basally 1-1,5 mm broad.
Corolla: Either greenish-yellow or yellowish-green and corolla lobes with brown tips, or entirely brown, 11-13 mm in diametro, dish-to bowl-shaped.
Corolla lobes: Broadly ovate-deltoid, 2,5-4 long, 3,5-5 mm broad, occasionally with fusiform tip area, inside smooth or finely papillate, papillae semiglobose with fine apical bristles.
Corona: yellow
Inner corona: 16-22 mm, divided from below the middle into 2 broad weakly dorsiventrally flattened linear horn-like appendages (appendages strongly spreading, approaching and touching each other in central position).
Outer corona-lobes: Linear, blunt, 0,6-1 mm, occasionally longer than the anthers and touching each other above the style head.
Fruit: Paired follicles 7,5-18 cm long.
Seeds: Numerous, strongly compressed, with a coma (a prominent basal tuft of silky hairs).

Subspecies, varieties, forms and cultivars of plants belonging to the Hoodia flava group 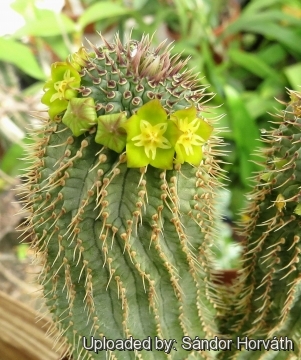 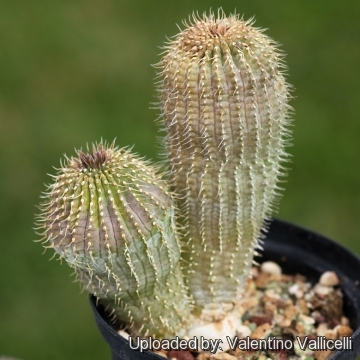 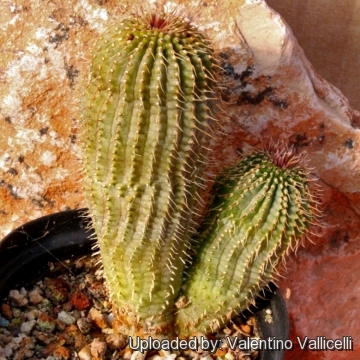 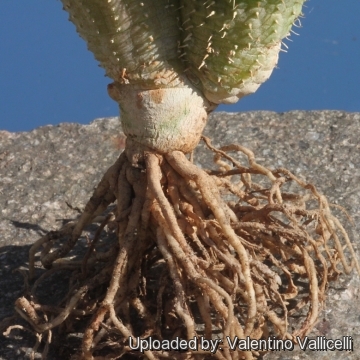 Cultivation and Propagation: Water normally in the growing season, sparsely in the winter.
It is usually recommended to over-winter them in warm conditions (at 10° C), but despite their African origins they seem to grow well and flower without the extra heat which one might have thought necessary, and occasional temperatures near 0°C. are tolerated, if kept dry.
Spring: In the spring leaving them out in the rain may provide them with the water they need.
Summer: In the summer months they will grow well in partial shade and tolerate heavy rain, but will be just as happy if the season is dry.
Propagation: Easiest with stem cuttings. Allow cuttings to dry several days before planting.
Potting medium: Since roots are quite shallow, use a cactus mix, or add extra perlite or pumice to regular soil potting soil. A gritty, very free-draining compost is suitable, and clay pots help the plants to dry out between watering.
Sun Exposure: Full sun or partial shade.
Edible uses: Commonly known as: “ghaap” the young pods are liked for their sweetniss. The whole plant is also used as an appetite and thirst-suppressant.