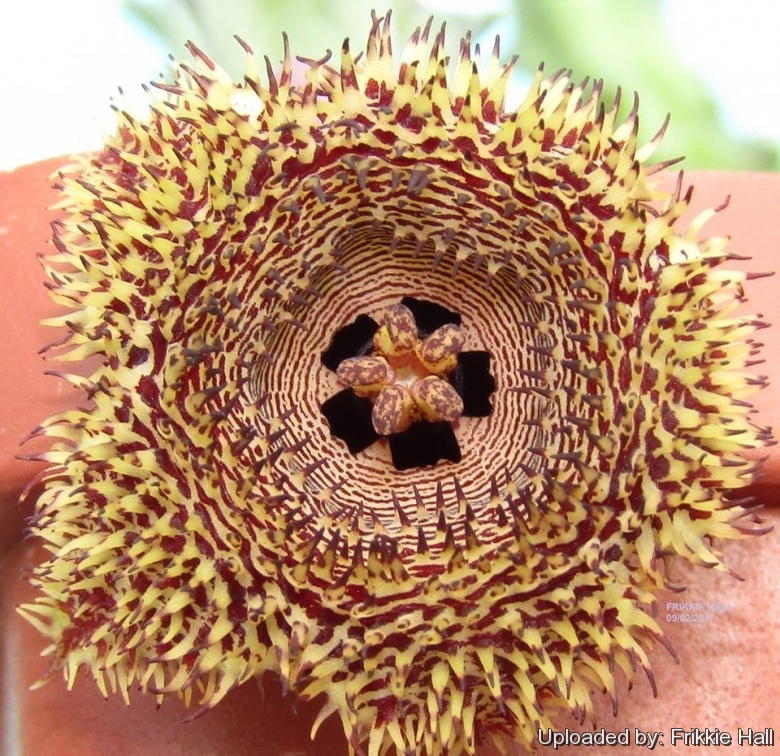 Origin and Habitat: Huernia hystrix has a wide distribution of south-eastern Zimbabwe, western Mozambique, Swaziland, and the Mpumalanga, KwaZulu-Natal, Eastern and Northern Provinces of South Africa
Habitat and ecology: It inhabit rocky areas.

Description: Huernia hystrix was in cultivation at Kew in 1869, when it was described (as Stapelia hystrix) in the Botanical Magazine. It is an interesting tufted species with erect stems being five-angled, purplish green that varies considerably in the size and the shape of the flowers. The flowers, which arise in succession at the base of the stems, are cup-shaped, with spiny petals, dull yellow in colour and banded with red, but variable. Huernia hystrix v. hystrix differs from its other varieties with its more vigorous stems and larger flowers. The inner surface of the flower is densely covered with prominent papillae, justifying the name 'porcupine Huernia".
Habitat: It is a compact plant readily offseting to form low growing dense mats 10-30 (or more) cm in diameter and 5-12 cm high.
Stems: Decumbent-erect, spreading, sometimes creeping, usually 5-7 (rarely, under cultivation, up to 12 cm long, 8-12 mm thick, prominently 5-angled, laterally deeply furrowed, glabrous, pale green, very slightly glaucous, sometimes tinted with dull purplish. Teeth firm, conical, acute.
Leaves: Rudiments persistent as hard spines.
Flowers: 2–5 together near the base of the stems lying flat on the ground, successively developed much smaller than in other species, with an unusually short corolla tube.
Pedicels: 18-60 mm long, glabrous.
Sepals: 7-10 mm long, 18 mm broad, subulate from an ovate-lanceolate base, obtusely keeled and glabrous.
Corolla: Broad, shortly pointed and with a small tooth at each angle in bud; when expanded 2,5-5 cm in diameter basally often only weakly roughened.
Tube: Short, campanulate or cup-shaped, about 6 mm long and 12 mm in diameter outside, mouth of the tube and corolla lobes abruptly divaricate.
Lobes: Abruptly and horizontally spreading from the tube, with recurved tips, 12-18 mm long and nearly as broad at the base, broadly triangular or deltoid-ovate, occasionally shortly pointed. Outside greenish, glabrous, but minutely papillate, pitted, prominently 3-nerved on the lobes. Inner surface (except within the tube) densely papillose, covered with spine-like acute fleshy processes (papillae) 3,5-5,5 mm long, fleshy, subulate, sometimes finely pointed, flattened, basally broadened, ochreous-yellow or cream-coloured dotted with crimson spots on the lobes and with numerous transverse crimson lines within the smooth and paler tube.
Outer corona-lobes: Very variable in shape and colour, half as long as broad, truncate, broadly emarginate or obscurely 3-toothed at the apex, black, sometimes much reduced or even undeveloped.
Inner corona-lobes: 2.5-3.8 mm long, capitate, erect, dorsiventrally strongly compressed, much exceeding the staminal column, linear, with a transverse thickening or ridge on the back below and expanded at the apex into a horizontally spreading process somewhat resembling an inverted foot, yellow, dotted on the upper part with crimson, basally with a broad wart-like convexity.
Pollinia: Yellowish with darker germination mouth region.

Subspecies, varieties, forms and cultivars of plants belonging to the Huernia hystrix group 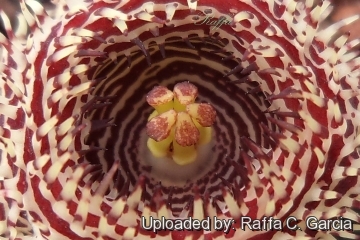 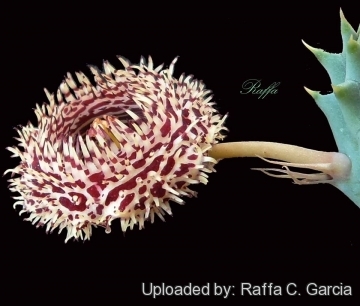 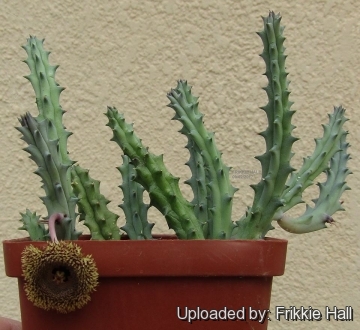 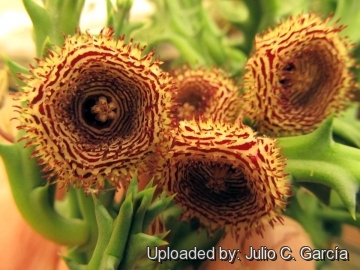 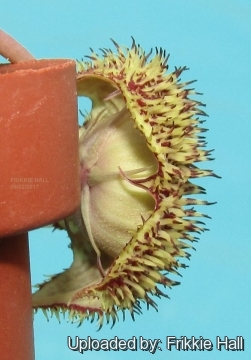 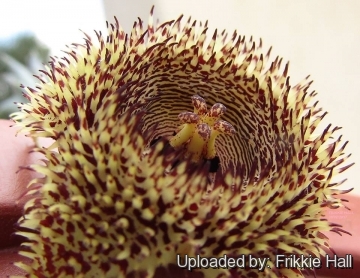 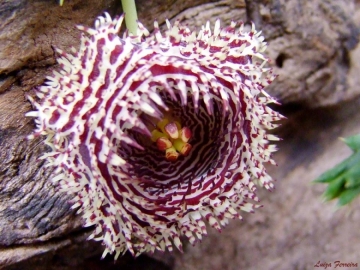 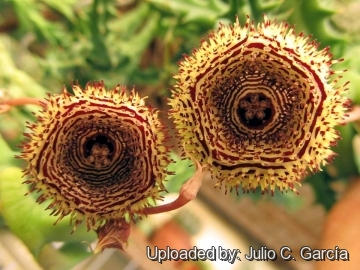 Cultivation and Propagation: Very easy to grow, it needs light shade to full sun (but tolerate shadow), very resistant to heat will also tolerate quite cold temperatures but avoid frost, best in a ventilated environment. It is quite resistant to the “Balck spot” disease of Asclepiads, Water regularly during the growing season, keep dry in winter. Use a gritty, well-drained soil.
Propagation: It is easily propagated by removing a cutting, sometimes with roots attached, in spring and summer, but seeds germinate readily if they are sown when fresh.