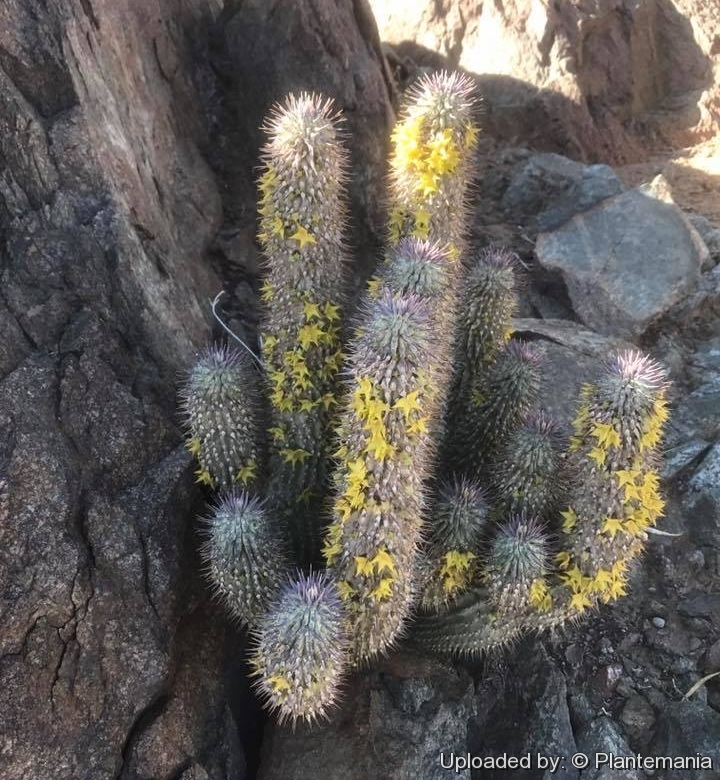 Origin and Habitat: Southern Namibia (in two disjunct localities: east to north-east of Lüderitz and in the Orange River basin), and in the quartz mountains of the Pella region in Bushmanland Northern Cape (South Africa ).
Altitude: 500-1100 meters above sea level.
Habitat and ecology: Hoodia alstonii is limited to the winter rainfall regions. It occurs in three apparently discrete areas which are separated at their nearest points by some 150 km. The northernmost of these consists of several gravelly hillsides (quartz and schist) to the north and south of the road from Aus to Lüderitz, 30 to 50 km east of Lüderitz. Plants are extremely common on the Hahlenberg, roughly in the centre of this area, but are much rarer on other similar prominences nearby and the species may be more widely distributed in these parts than the records show. The other two areas where it occurs are along the lower reaches of the Orange River. The more extensive of these is the mountainous country along the lower Orange River from Umdaus north of Steinkopf to Sendelingsdrift. Here H.alstonii grows on both banks of the river and is mainly found on schist slopes and outcrops (occasionally on quartz). The remaining area is in the flat-topped quartz mountains of the Aggenys -Pella - Pofadder area where it seems to occur mainly on the summits of these ridges, but in this case only on the south bank of the river. Plants in this area seem to be markedly smaller than further west, starting to flower when only 80 mm tall and rarely exceeding 300 mm in height. H.alstonii inhabits inhospitable arid places. Plants of any size generally grow fully in the open on rocky slopes or stony flat areas. Several times they have been seen rooted in the most unlikely narrow crevices in rock outcrops where they still manage to reach a considerable size. They are often very scattered but occasionally small localised colonies are found.

Description: Hoodia alstonii is a many-stemmed, glaucous, succulent shrub branched from the base. The sturdy, upright branches may reach 1 m in height, and about 500 mm in width. The stems are armed with hard, sharp spines much like those of Hoodia gordonii. Numerous clusters of yellow star-like flowers develop mostly on the top parts of the stem and make quite a show, covering the top of the plant with yellow. They are peculiar for the very thin texture of the corolla, without papillae on the inner surface. H. alstonii is similar to Hoodia flava, but its flowers are more or less campanulate, not flat as in H. flava. The corolla lobes are also narrower than in most of the Cape species but the structure of the corona is similar, for example, to that in Hoodia pilifera. The flowers have a foul odour similar to excrement, they produce nectar and are mostly pollinated by flies.
Derivation of specific name: The epithet “alstonii” honours Captain Edward G. Alston (fl. 1891–1917). Alston's Hoodia.
Stems: 0.5-1 m tall, whitish-grey-green, glaucous, 40-80 mm thick, with about 20-22 rows of vertically arranged tubercles forming somewhat distorted but quite deeply furrowed angles. The tubercles ends with a stout sharp pale brown spine (6-)8-10 mm long.
Roots: Hoodias have a shallow root system
Flowers and inflorescences: Many shortly pedunculate inflorescences with groups of 1-8 flowers develop below the apex of the stem. The flowers have a very foetid odour. The pedicel is very short, 1-2 (rarely 4) mm long. The sepals are 2-2.5 mm long, basally ± 1 mm broad. The corolla is 10-18 mm in diameter, yellow becoming whitish towards the bottom of the tube, glabrous and smooth on both surfaces, tube campanulate to funnel-shaped, 2-3(-4) mm deep, slightly thickened near the Gynostegium and touching its sides. The corolla-lobes are well defined, ovate and normally tapering, very acutely (4-)6-8 mm long, about 4-5 mm broad at base, spreading-ascending. Corona is pale yellow, the outer corona lobes are 1-1.5 mm long, deeply divided into two erect lobes, with blunt tips divergent-erect, the inner lobes ± 0.75 mm, rectangular, blunt, incumbent on the anthers and mostly surpassing them.
Fruit: Paired follicles 3-4(-4.5) cm long. Bruyns notes that the species produces the smallest follicles in the genus.
Seeds: Numerous (27-60 per follicle), strongly compressed, with a coma (a prominent basal tuft of silky hairs).

Cultivation and Propagation: Hoodia alstonii is one of easiest species to grow but prone to root rot due to overwaterings and lack of fresh air.
Esposure: Indoors only in brightest position.
Watering: Water normally in the growing season, sparsely in the winter.
Hardiness: It is usually recommended to over-winter them in warm conditions (at 10° C), but despite their African origins they seem to grow well and flower without the extra heat which one might have thought necessary, and occasional temperatures near 0°C (or less) are tolerated, if kept dry.
Spring: In the spring leaving them out in the rain may provide them with the water they need.
Summer: In the summer months they will grow well in full sun or partial shade and tolerate heavy rain, but will be just as happy if the season is dry.
Potting medium: Since roots are quite shallow, a gritty, very free-draining compost with extra perlite or pumiceis suitable, and clay pots help the plants to dry out between watering.
Edible uses: The stems of many Hoodia species are eaten, although there are differences in flavour (more or less bitter). They form a convenient emergency food and moisture source in harsh arid environments. Recorded edible species are: Hodia currorii (Namibia, Angola, Botswana, Zimbabwe) Hoodia alstonii (Namibia, South Africa), Hoodia flava (Namibia, South Africa), Hoodia gordonii (Namibia, South Africa), Hoodia officinalis (Namibia, South Africa) and Hoodia pilifera (L.f.) Plowes (South Africa). They are all commonly known as `ghaap'. The young pods of all species are liked for their sweetness. The plant is harvested from the wild for local use as a food and means of staving off hunger. Many species in this genus have potential for use in helping overweight people reduce their weight, acting by reducing the sensation of hunger.
Propagation: Propagation is done mainly from seed. Cuttings are not really an option, as the severed ends very rarely form a callus from where roots will eventually form. Seeds are produced in March and April of each year (Europe). The seed horns must be semi-dry and starting to split down the middle before seed can be collected. If you try to take a cutting allows it to dry several days before planting.