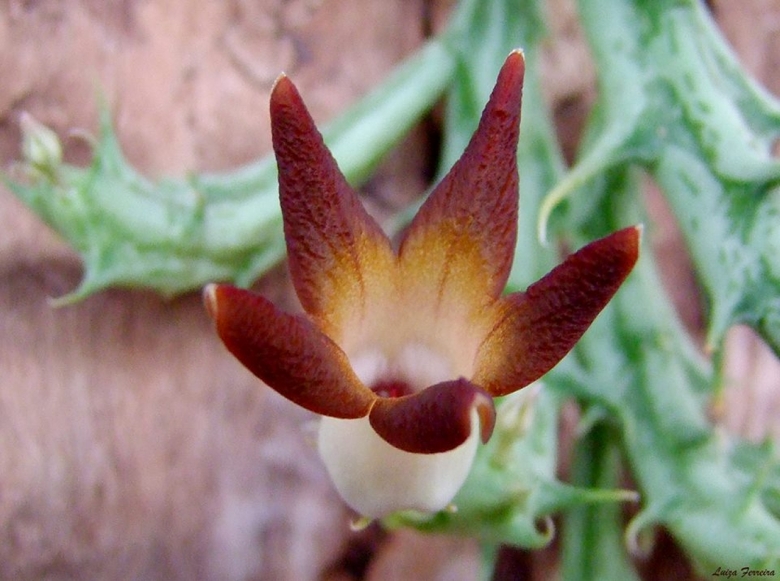 Origin and Habitat: Orbea distincta is a relatively rare species only known from three findings in the northeastern corner of Tanzania (where it is only recorded to the east of the Pangani River in the Umba Steppe District between Moa and Mwakijembi) and the adjacent part of southern Kenya, with a single record from much further to the north in Kenya near Garissa in the Teita District.
Altitude range: 30-1200 metres above sea level.
Plants of C. distincta grow in the shelter of low bushes (often spiny members of the Acanthaceae) among scattered trees (Euphorbia robecchii, Acacia, Balanites, etc.), usually in flattish areas but also on hills on rocks with the fern ally Selaginella, in sandy to loamy soils in open desert scrub. It is often associated with Edithcolea grandis, another sprawling Stapeliad which grows in sandy soil under scrub, so giving some protection from grazing. The populations tend to be very small, often of less than 10 individuals, and are particularly susceptible to grazing as are all the smaller species of Caralluma. Further populations may exist elsewhere, but most of the vegetation in the region has been each altered by grazing and agriculture, and any surviving populations would be small and highly vulnerable.

Description: Orbea distincta is a succulent herb with trailing segmented stems like those of Orbea schweinfurthii. The flowers are erect and relatively large for the genus with a very characteristic tubular corolla, usually bicoloured with the brown or carmine colour on the lobes fading to pale creamy-yellow within the tube. The pointed lobes with margins curved backward grow in a nearly erect position and the fully-developed flower appears thus to be only half open.
Stems: Trailing, segmented erect at their apices, with segments linked together in a sequence of loose joints, cylindrical in cross section, pale green, grey-green or olive-green and mottled or streaked with darker green and maroon, each segment 6-8 cm long, 5-8 mm in diameter, with well developed, tapering, alternating pairs of teeth (3-5 mm long, 1 mm thick), subulate representing the absent leaves.
Flowers: One or two flowers appearing singly from the axils of teeth near the apex of the stems. Pedicels 9 long 3 mm in cross section. Sepals spreading 5-6 mm long, 2-3 mm wide. Corolla erect, bell-shaped, outside cream-coloured or whitish with dark brownish longitudinal streaks, inside cream-coloured, 3.5-4 cm in diameter, campanulate. Tube 15-17 mm long, 10 mm across, embracing the corona, mouth somewhat narrower, 5 mm above the base hairy, hairs 15-17 mm long. Lobes 5, erect or spreading, 16 mm long, and 10 mm wide, elongate-ovate, apically shortly attenuate, reflexed on the margin; pale pinkish white with purple markings outside, the lobes intensely carmine, dark purple-brown or dark flesh-coloured on the inner surface and paler within the tube, though flowers that are wholly yellow are known, inside wrinkled and with folds, with 5 longitudinal depressions from base to tip, inside glabrous. Corona within the flower a cup c. 2 mm high and 1.7 mm wide. Outer-corona lobes cup-shaped, lobes forming shallow ovate to reniform or cordate pouches, apically thickened, incised in the middle. Inner-corona lobes basally triangular, apically linear and laterally compressed, with conical dorsal appendage, with small bulges where united with the outer-corona. Pollinia c. 0.5 x 0.45 mm, broadly D-shaped. The flowers of O. distincta are among the most impressive in size among the northern species of Orbea, but they seem to be very short-lived, remaining open for 1 to 2 days only. They emit a relatively faint bad odour.
Remarks: Orbea distincta is a very remarkable species and was at first thought to represent a new genus. It is unique among the species of Orbea in bearing a longitudinal ridge along the back of the inner corona lobes, which can form quite a prominent feature of the top of the gynostegium.. In shape, the flowers resemble those of Orbea deflersiana, Orbea sacculata, and Orbea tubiformis, but this coronal feature immediately distinguishes O. distincta. A further unusual character is the dense patch of short but quite obvious, white, downward-pointing bristly hairs in the lower part of the corolla tube. These bristles is believed to trap the insect pollinators. 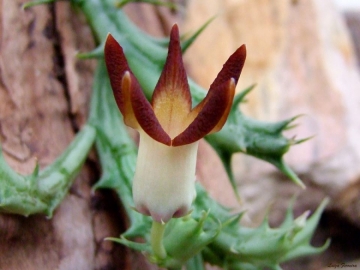 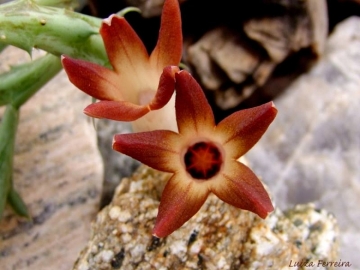 Cultivation and Propagation: Orbea distincta grow well in light gritty soil with a very liberal drainage. They should at all times sparingly watered (best rain water with some occasional fertiliser), and in winter time they hardly require any. They require outdoor culture, or a warm close greenhouse, while growing in the early part of summer, and afterwards may be ripened and kept in a greenhouse; but as they bloom chieﬂy in autumn, warmth is desirable to enable them to expand their ﬂowers.
A minimum winter temperature of 5-10°C is acceptable, providing that plants are kept absolutely dry. They prefer light shade rather than full sun, although stems may not colour up under shady conditions.
Propagation: Plants are usually increased by cuttings, which, as they are very succulent, should be allowed to dry a week after they are taken off, when they may at once be put singly into pots.
Pest & diseases: Keep their roots free of mealy bugs, as fungal attack often occurs as a result of damage to stems by insects. A layer of grit on the surface of the compost prevents moisture from accumulating around the base of the stems and minimise the chance of fungal attack on the roots. Unfortunately, like other Stapelieae, they are liable to attack by 'black rot' or 'black fungus' disease.
Traditional uses: This species is sporadically collected for food by local people.