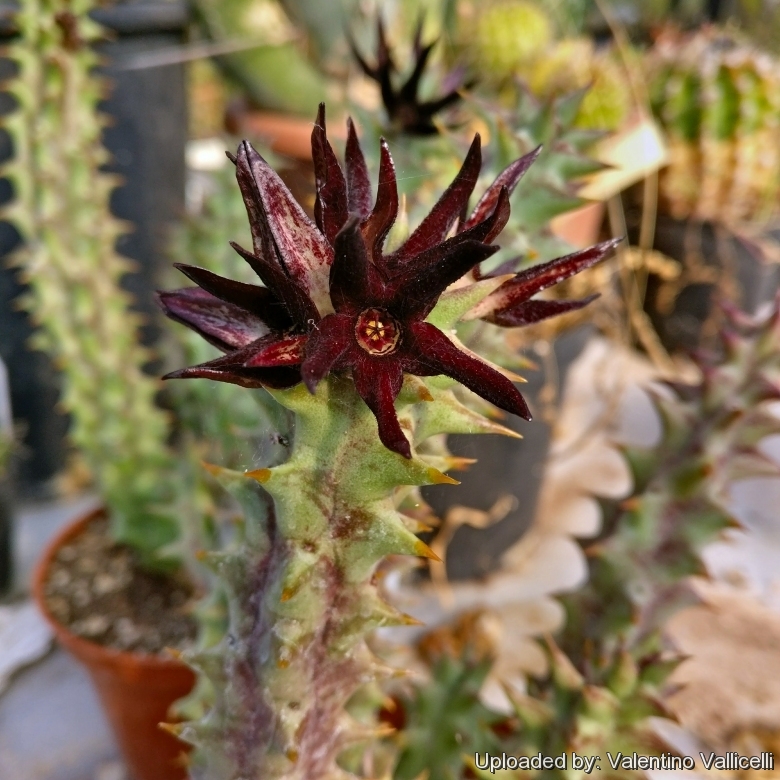 Origin and Habitat: Western South Africa (Northern and Western Cape), and Klinghardt Mountains near Lüderitz in southern Namibia (Caralluma winkleriana).
Habitat and ecology: Quaqua mammillaris occurs in most Karoo-Veld types, in rocky hills and on lower slopes of hills at 150-1100 m altitude. There are no signs that Quaqua mammillaris is threatened by genetic erosion. Quaqua mammillaris is undoubtedly the most widespread species in South Africa, but the plants are often single, wide spaced and difficult to spot. The chance to see them in flower is very rare.

Description: Quaqua mammillaris is a much-branched, robust succulent shrub, up to 50 cm high, and 50-70 cm across, branched in a bushy manner which root from the primary stem only. The leaves are transmuted into hard thorns. Bunches of 3-15 velvety purple-brown flowers appears in autumn in the upper 2/3 of the stem, and open simultaneously, but are seldom seen in culture. The corolla is 20-27 mm across, the tube is yellow and purple-spotted. The corona is stipitate (held on a stalk), dark purple-brown, The outer lobes are erect, bifid, fused to the bases of the inner lobes that form pouches. The inner lobes are shortly erect, incumbent on the anthers, and exceed them.The odour of the flowers is extremely disagreeable.
Derivation of specific name: The name refers to the stout tubercles with brown apices (From Lat. “mammilla', nipple ).
Stems: Branching from a single, central stem, erect from base. Branches, erect, glabrous, green, sometimes mottled with purple-brown, 15–50 cm tall and 18–36 cm thick, very variable, short and very compact, sometimes with robust tubercles, or slender-stemmed, irregularly or spirally 4–6-angled. Tubercles 5-20 mm long, conical, spreading, fused near base into the irregularly arranged angles, glabrous, light green, faintly glaucous, armed with stout, yellowish, hard-pointed acute spines 6-12 mm long, with the apical half of the spines brown.
Leaves: Rudimentary, forming the tubercle tooth; stipular denticles absent.
Inflorescence: Flowers in fascicles of 4–15 or more, along the grooves between the angles, usually near the stem tips in the upper 2/3 of the stem.
Flowers: Flowers bisexual, regular, 5-merous. Buds oblong-triangular, basally rounded. Pedicels 2-3 mm long, glabrous, holding the flower horizontally. Sepals 2-4 mm long, ovate, acuminate, glabrous. Corolla campanulate, 20-27 mm in diameter, glabrous and pale green outside, with the tips, margins and a stripe down the middle of the lobes and some dots on the tube very dark purple-brown; inside minutely papillate-setulose on the lobes and upper part of the tube, rich velvety black-purple on the lobes, pale yellowish dotted with blackish purple in the tube, which is 3-6 mm long and as much in diameter. Corolla lobes purple to reddish-black, erectly spreading, 12-20 mm long, about 4-7 mm broad at the base, thence gradually tapering to a very acute apex, longitudinally folded outwards, with revolute margins, inside usually papillose, papillae with an apical horizontally curved thick hair. Outer corona about as long as the staminal column, cupular, 10–15-bi- or trifid, appendages deltoid, glabrous, dark purple-brown. Inner corona-lobes 1-1.5 mm long, subulate or linear, acute to truncate, incumbent on the backs of the anthers and exceeding them, apically meeting and ascending in a curved manner over the style head with more or less connivent-erect tips and a short dorsal projection at the base, adnate to the outer corona and forming 5 of its teeth, dark purple-brown. The corona is variable, especially in the length of the erect tips of the inner lobes.
Fruit: A pair of follicles.
Chromosome number: 2n = 22. 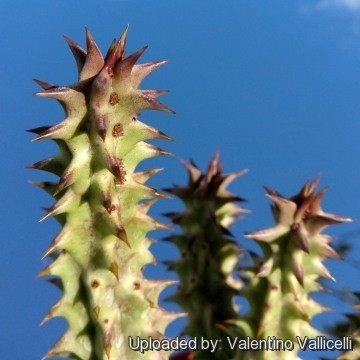 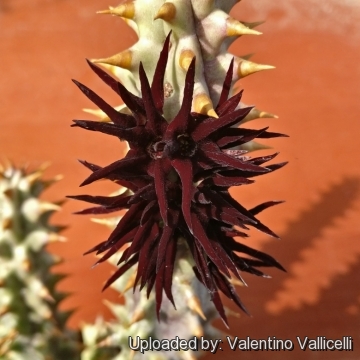 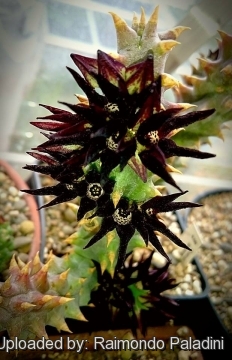 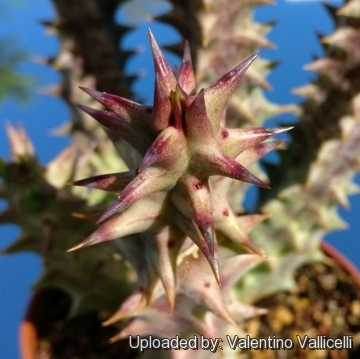 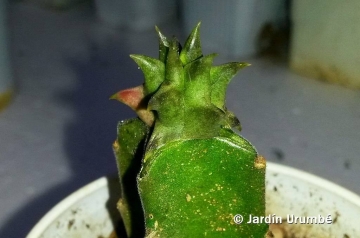 It is occasionally grafted as it is not easy to grow. Photo by: Alexander Arzberger 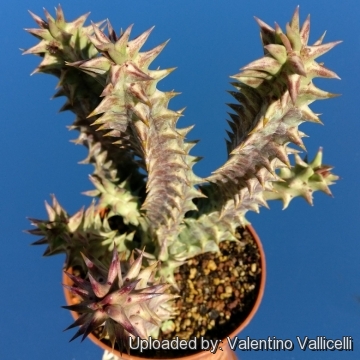 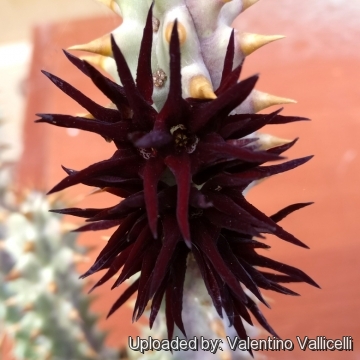 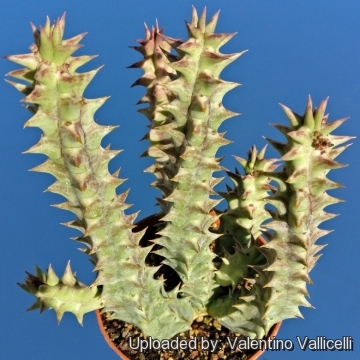 Cultivation and Propagation: Quaqua mammillaris is difficult to cultivate.
Soil: The substrate must be essentially mineral.
Watering: Water sparimgly from spring to autumn only when soil is dry.
Hardiness: Quite cold resistant (But needs low ambient humidity).
Uses: Fresh stems are eaten to treat peptic ulcers, to treat hangovers and to reverse drunkenness. A small piece of stem is sufficient to suppress hunger and thirst for a day. Larger quantities can be eaten as a fresh vegetable, but it should not be eaten by pregnant women. The stems of Quaqua mammillaris are similarly used as Hoodia spp., as a suppressant of appetite and thirst, but as a medicinal plant, it will probably remain of limited use.
Propagation: The seeds, if fresh, usually germinate easily, but it is a challenge to reach young seedlings to adult size. Stems cuttings often take several months to put forth a root.