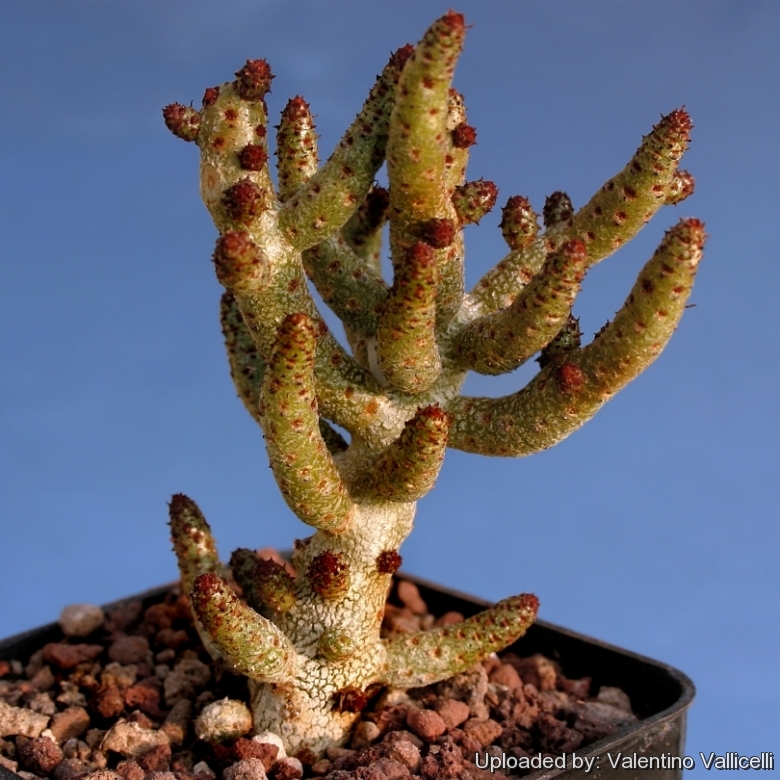 Tylecodon buchholzianus Photo by: Valentino Vallicelli
This charismatic bonsai-like dwarf shrub is a delightful plant which can grow, during our Winter. In our Summer it is completely dormant and should be given a rest.

Origin and Habitat: Coastal strip of South-western Namibia to Komaggas and in the Richtersveld (on either side near the Orange River mouth) Cape Province, South Africa.
Habitat and ecology: Desert, Succulent Karoo. Tylecodon buchholzianus is a widespread and common taxon that grows either on exposed rock faces and under-shrubs in shaded rock cracks on cool, south or east facing rocky slopes that are well situated to receive the north-east drifting fogs from the sea and have a high density of plants. Other accompanying succulent species can be Anacampseros namaquensis, Conophytum saxetanum, Conophytum meyeri, Conophytum obscurum, and Mitrophyllum grande. It is threatened in parts of its range by habitat loss to mining, particularly along the Gariep Valley and inland of Kleinsee, but not yet in danger of extinction. The population trend is stable.

Description: Tylecodon buchholzianus is a slow growing, ascending, dwarf bonsai-like shrub, with somewhat swollen irregular base and spreading untidy irregular crown. The typical variety is erect to about 20(-30) cm tall and 27 cm wide. The plant has a swollen rootstock (caudex) which qualifies it to be a caudiciform. It is a winter growing species, the growth starts in autumn, but really takes off during the first warmer days of spring. It is very variable with several local forms, but since these are intergrading, they are difficult to classify formally. The shape and size of the leaves show considerable variation and in some plants they never develop. In such cases only brown rudiments occur on the nodes. Two varieties are recognized, the nominate form (with erect stems) and subs. fasciculatus (with spreading stems, becoming pendulous).
Stem (caudex): The caudex is slightly thickened, irregular, with many erect, well-branched pale stems, side branchlets usually short, to 2 cm in diameter at the base tapering to 3 -5 mm in diameter, the bark is grey-green, pale grey or brown, brittle with small hollow. Leaf-scars 1-2 mm wide. Older branches with peeling bark in brown flakes. The side branches are erect to spreading or rarely drooping when growing from overhanging rocks, nearly always leafless and photosynthetic active for a long time.
Leaves: Tylecodon buchholzianus is unique among the Tylecodon. It can grow branches without evidence of leaves. Microscopic leaflets perform the function of normal leaves, allowing the branches to grow. It is also capable of setting normal leaves in the spring; They are short-lived, crowded at branch apexes, linear, usually apiculate, terete or slightly grooved above, 5-15(-40) mm long. 2-3(-5) mm thick, curving upwards, glabrous, dull green and often with brown striations. Bra-like leaves reddish, subulate, 1 mm long.
Inflorescences (thyrses): Erect almost sessile, 1-3 branched, each branch with 1 or 2 erect flowers, but usually only one flower per inflorescence in nature, glabrous or almost so. Peduncle up to 10 mm long, purplish brown. Pedicels 4-10 mm long.
Flowers: Tubular, pink to red. Calyx 1,5-2,5 mm long, glabrous, green. Lobes triangular, acute and recurved. Corolla glabrous outside, pink to deep red. Tube cylindrical, 10-14 mm long, with fine hairs in throat. Lobes 4-5 mm long, hairy on the inside, spreading, becoming recurved. Anthers 1,2-1,4 mm long. Squamae oblong, 1,5-2,5 x 0,9-1 mm, often somewhat broadened in lower third, usually deeply emarginate, fleshy, yellow.
Blooming season: Summer (in habitat from January to march), or late spring.

Subspecies, varieties, forms and cultivars of plants belonging to the Tylecodon buchholzianus group 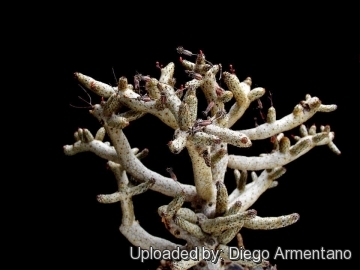 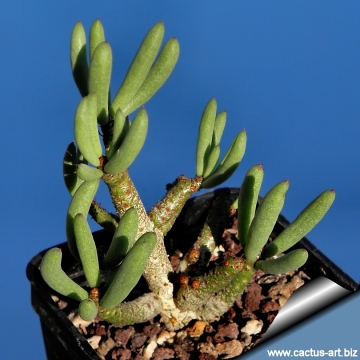 It can grow through photosynthesis in the stem, and only rarely bothers to set leaves at all. Photo by: Cactus Art 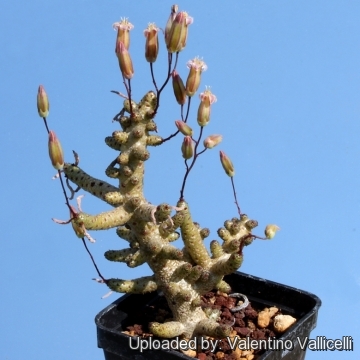 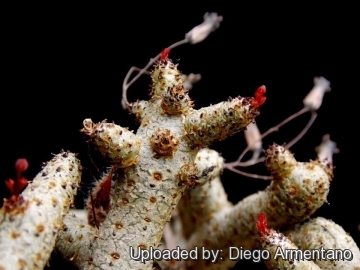 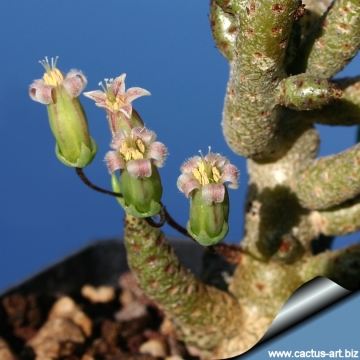 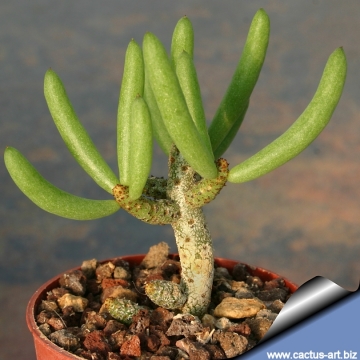 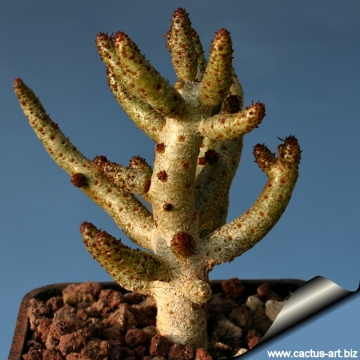 The branches are grey to black with delightful red new growth. Photo by: Cactus Art

Cultivation and Propagation: Not particularly difficult to grow using a well drained, cactus compost and exposed to bright light. It is a winter grower, dormant in the summer. In the growing season water when the roots are almost dry, prefer little or no water in summer, depending on size. Winter minimum temperature is 5ºC but better at 8ºC. The leaves easily drop off in cool conditions. Re pot every 2/3 years using the above compost with added slow release fertilizer. This species usually stay compact but if the plant get leggy with time it is possible to prune it during the growing period to keep it tight and to encourage caudex enlargement. It can be cut back severely and will quickly recover when growth starts in the spring.
Propagation: Fairly easy to propagate from cuttings in late Autumn, the fallen leaves sometimes produce adventitious roots but usually they fail to produce a growing bud.