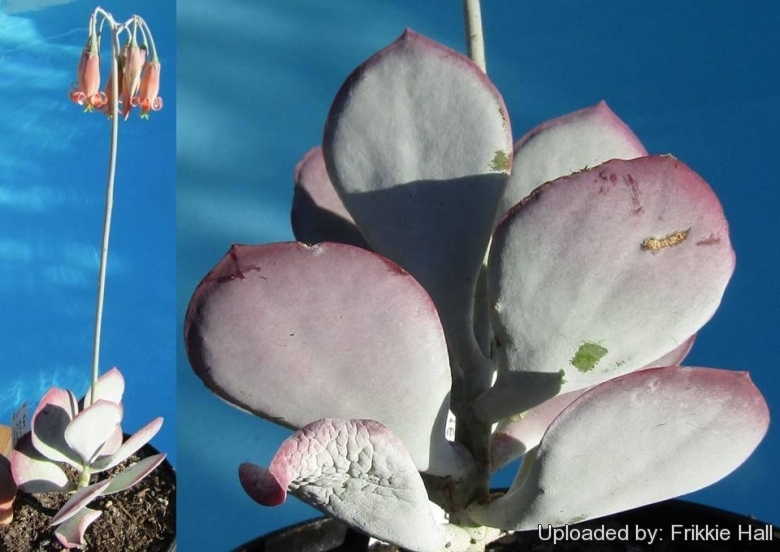 Origin and Habitat: Native of a vast arid region in the southwestern zone of South Africa (Karoo region). It is widely cultivated and popular in gardens in many countries. It has naturalized and is often invasive in several subtropical countries like Australia and New Zealand.
Habitat: In the wild, it grows naturally in rugged landscapes and grassy low treeless vegetation in sandy or rocky outcrops often on grassy slopes.

Description: The Cotyledon orbiculata is a robust evergreen succulent shrublet with brittle stems 50-120 cm tall, 80-150 cm wide often quite densely branched. It one of the oldest grown succulents being introduced as long since as 1690 by Mr Bentick that still retains a place in most collections for the magnificent glaucous colour of its foliage and its large flowers of long duration. It is one of the most complex specie, not only because of its seemingly endless range of variation, but also because many of its numerous forms have been formally described. The several varieties and forms enumerated are differing chiefly in the form of their foliage. Leaves, stems and flowers have a waxy bloom.
Stem: Erect or reclining, fleshy, leafless, elongated, up to 1,5 m long and 2 cm in diameter, with the tips growing upward simple or once or twice divided the greater part often buried under ground
Leaves: Opposite, very variable in shape, up to 13 by 7 cm, fleshy, hairless or seldom velvety, usually ± flattened broadly paddle- to spindle-shaped, obovate spatulate, blunt acuminate pale green, grey- green, grey-white, blue-grey with a powdery waxy coating over the whole leaf that helps reflect sunlight and conserve water. Do not touch the leaves or you will damage their bloom. Margins with deep-reddish.
Flowers: In compact paniculate clusters at the end of a sturdy, erect stalk 45-60 cm long, flowers nodding, usually less than 3 cm in lengt, bell-shaped to tubular; corolla ± cylindrical with recurved lobes, externally pink, orange or dull reddish, internally of a fine flesh rose red colour, but yellow varieties also exist. The smell is very strong and something resembling that of decaying roast beef or of some of the fungi. Pollinated mainly by honeybees.
Blooming season: Winter.
Seeds: Extremely small, weighting bout 0,01 mg. These small seeds (also known as dust diaspores) can be blown about like dust particles without any special devices for buoyancy. In this species, enormous numbers of seeds are produced at the cost of fewer, larger sized seeds . Because this plant occur abundantly in the arid areas and has specific habitat requirements, the production of increased numbers of seeds is essential to enhance the probability that at least some seeds will reach a favourable germination site. Except for their small size, these diaspores generally lack other appendages to further promote dispersal by wind. Several genera of the Crassulaceae, e.g. Crassula, Tylecodon and Cotyledon, occouring in the arid areas of southern Africa have very tiny dust-like seeds. The production of numerous dust-like seeds by desert species serves as an escape strategy to prevent mass consumption of seeds. These tiny seeds are carried by the wind to cracks and furrows in the soil and are then covered with fine soil particles. 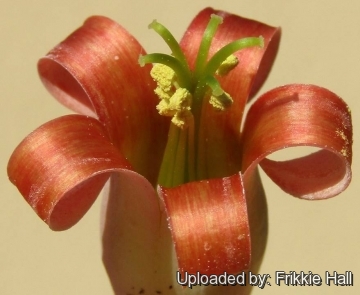 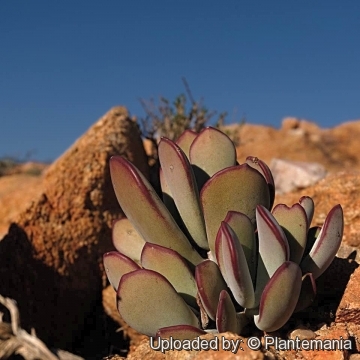 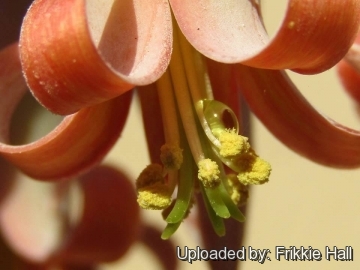 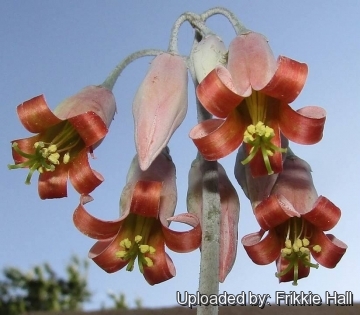 Cultivation and Propagation: Cotyledon orbiculata is widely grown and not difficult to cultivate. Cotyledons are very responsive to differing cultural conditions both as regards colour, length and shape of leaves, rate of growth and size of plant.
Growth rate: Moderately fast.
Soil: It grows best in sandy-gritty soil. Good drainage is very important as it is prone to root rot.
Fertilization: Feed it once or twice during the growing season with a fertilizer specifically formulated for cactus and succulents (poor in nitrogen), including all micro nutrients and trace elements diluted to ½ the strength recommended on the label.
Watering Needs: It is a very dry-tolerant plant. Water regularly in the growing season, but avoid water-logging and let dry between watering, they should dry out completely during the rest period. The leaves have a white waxy coating over the whole leaf. To preserve this covering, plants should be watered from below. If grown in a container, bottom watering by immersing the container is recommended. It must have very dry atmosphere.
Sun Exposure: It grows in sun or part shade but flowers best in full sun. In summer keep cool and provide some shelter from direct sun during the hottest hours. In shade the body colour will remain more green, while in harsh full sun conditions the foliage can develop its characteristic blue-grey tinge. It can be sunburned if moved from shade/greenhouse into full sun too quickly. The amount of sunlight it can withstand without scorching depends upon the how hot it becomes in the summer in the locale in which it is planted.
Frost Tolerance: Light frost protection required. It requires a minimum temperature of about 5°C, but will take a light frost and is hardy down to -5° C for short periods if it is in dry soil (Lethal temperature in habitat -6 to -10 ° Celsius). USDA zones 9A – 11. In areas prone to frost, grow in an intermediate greenhouse or conservatory, in pots.
Uses: They make wonderful rocker plants in hot, dry areas and also grow well in containers or sunny patios or in a hot corner next to a swimming pool.
Traditional medicine: The Common name,'Plakkie', is Afrikaans, meaning to 'place on' from its popular and effective use as a poultice (a heated leaf) on boils, corns, warts and abscesses.
Warning: The plants are toxic because to humans and domestic animals, especially sheep and goats. Poisoning may be acute or chronic, the latter due to the cumulative effect of the toxins.
Pests and diseases: May be susceptible to mealybugs and rarely scale. Protect from cold.
Propagation: From seed but it is easily increased by cuttings. Cuttings root easily. It is also possible, to plant the leaves in good, sandy soil where they will take root - members of this family often propagate vegetatively in this way.