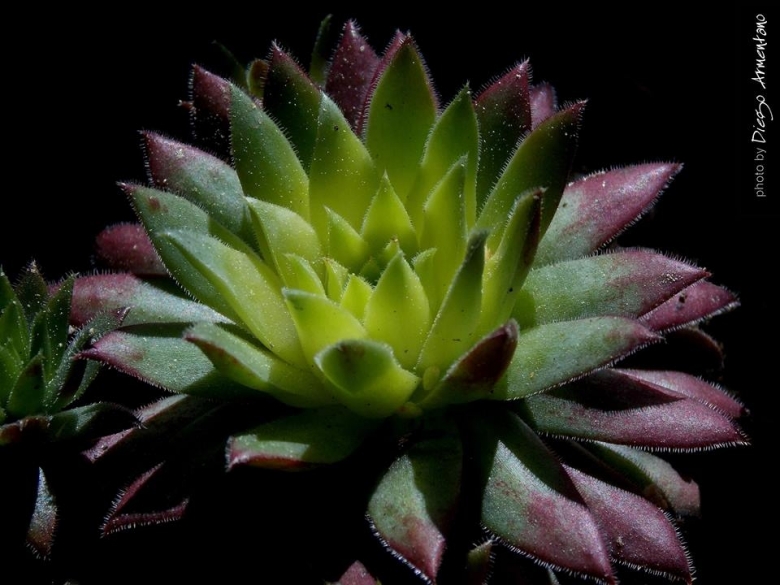 Origin and Habitat: The distribution area of Sempervivum globiferum subs. hirtum ranges from the Alpes Maritimes in France and Italy to the East Carpathians and to the north-east, extending to Murmansk in Russia.

Description: Long cultivated under the synonym Jovibarba hirta, Sempervivum globiferum subs. hirtum is a rosettes succulent commonly know as the hairy house-leek. It is distinguished by roughly fringed leaves and flowers. The flowers are yellowish, almost bell shaped, forming a dense corymb, on stems 15-20 cm high. If the plants are dried, the leaves are rolled; if not, they spread out.
Rosettes: Mostly open, 2.5-5(-7) cm in diameter. The offsets are globular and
emerge from the lower leaves only on stems which are thin and evanescent.
Leaves: Thick, fleshy, oblong-lanceolate to broadly ovate in form, spreading, acute, widest at or below the middle, patent or erect, about twice as long, 15-20 (-30) x 5-7 mm as they are broad, strongly fringed, uniform greenish with a grey puina, sometime with red or reddish brown tips, marginal cilia stiff, spreading, white, equal in length.
Inflorescence (corymb): Dense on flowering branch 10-15(-20) cm tall, stout, with glandular-pubescent, erect leaves.
Flowers: Yellowish, starry, almost campanulate. Sepals usually with normal hairs. Petals more erect and narrow-lance-shaped, almost obtuse, with a long fringe (glandular-pubescent) on their margin, strongly incurved. Filaments glandular-pubescent. Style 4-5 mm long. Nectar-glands about 0.7 x 1 mm, yellow-tipped.
Blooming season: Summer.
Similar species: The distinctness of Sempervivum hirtum from Sempervivum soboliferum is a matter of opinion (W.L. Tjaden 1970).

Subspecies, varieties, forms and cultivars of plants belonging to the Sempervivum globiferum group

Cultivation and Propagation: Sempervivum globiferum subs. hirtum is an interesting plant and very easy to grow in container or in the rock garden. It grows well in any position where the common Houseleek (Sempervivum tectorum) may be grown, and in any soil.
Soil: Although it grows on limestone substrata, it does not seem fussy about conditions in the garden. Require a well drained succulent soil mix. Outdoors it will spread itself through narrow locations between rockery stones. It does not prefer rich loamy soil; gritty dirt with pea gravel suits it.
Watering: It takes little water & could rot if watered too often. During the growing season, the plants are watered and allowed to dry slightly before watering again. Although they can take a great deal of drought, they seem to do better with regular (but moderated) watering. During the winter months, plants are watered very little.
Exposition: It need full sun to light shade and tolerates shade, but a sunny spot is nicest, though in warmer climates it needs protection from too much sun because it is not very heat tolerant.
Frost Tolerance: Hardy at least to -12°C (or less).
Remarks: After the plant blooms and sets seed it will die, but there will be many offsets to take its place.
Uses: It is choicest species for the rock-garden and borders, it can be used for edgings, lines and panels in the flower garden, and naturalized on walls, ruins, or any position where the Common Houseleek thrives.
Propagation: Is very easily propagated by division of larger clumps or by offsets.