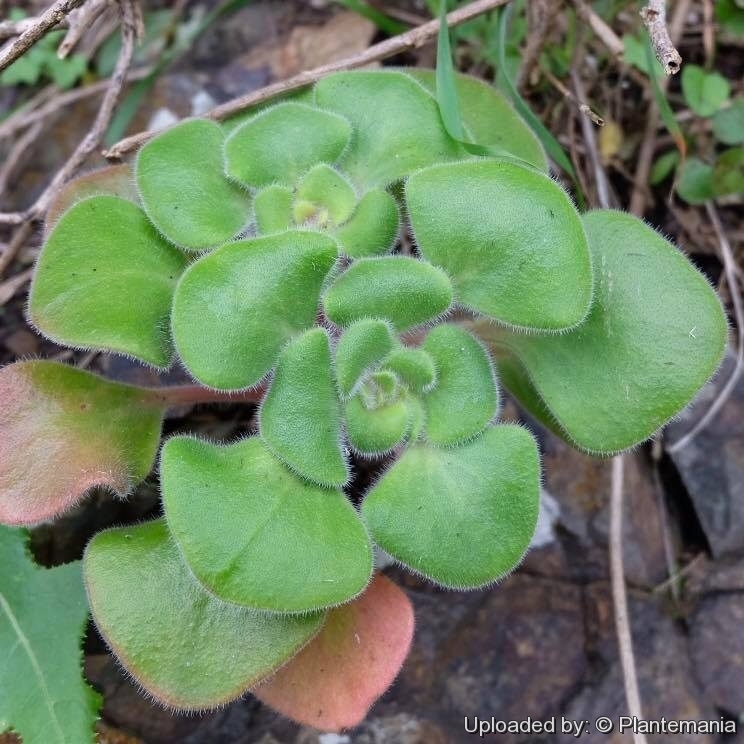 Origin and Habitat: Canary Islands (except Lanzarote and possibly Fuerteventura); naturalized in Portugal (Serra de Sintra).
Altitude range: Aichryson laxum grows on wet cliffs in rock crevices and shady slopes and extra-humid places in laurel and pine forests. It is often frequent and forms forms colonies. It is also encountered on damp, shady town walls. Occasionally Aichryson laxum grows epiphytically. It is probably the most abundant species of Crassulaceae on the Canaries.

Description: Aichryson laxum is an annual or most often biennial semi-succulent herbaceous plant (it dies after flowering unless the inflorescence is removed as the flowers die). It is 15-40 (rarely up to 80) cm tall, often weedy and fragile. The whole plant is covered with soft, short hairs up to 4 mm long and hairy, green or reddish (in strong light) leaves, up to 7.5 cm long, arranged in rosettes at the tip of stems. The inflorescence is a branched cluster of up to 50 star-like, yellow flowers. Although it is very similar to Aichryson porphyrogennetos Bolle, it is best recognized by its soft, hairy, long-petiolate, blunt leaves , which are wider near the base and mid-yellow flowers. The hairs do not have a glandular tip and the leaves lack black glands at the edges.
Derivation of specific name: laxum: latin epithet meaning lax, loose, not very tight, alluding to the soft leaves of this plant.
Stems: 7- 2 mm in diameter, generally hairy throughout, lower braches slightly woody, dichotomous (forked).The twigs are upright.
Leaves: The leaves are loose, arranged alternately, 25-60 mm long, 15-30 mm wide, widely ovate or rhombic, broadest near the base, blunt or rounded, truncate to abruptly narrowed into a distinct narrow petiole, densely hairy, often tinged purplish-red. The margins are papillose, not crenulate and without black dots.
inflorescence: Lax, many-flowered; Peduncles 6-12 mm long.
Flowers; 9- to 12-merous, 13-6 mm in diameter; Sepals hairy. Petals 6-8 mm, lanceolate, acuminate, deep yellow. Flowering time is from April to June.
Taxonomy notes: This species is often encountered under the name of A. dichotomum (e.g. Flora Europaea). A. laxum has priority, however, but its application is questioned by some authors.

Cultivation and Propagation: Aichryson laxum grow as understory plants and prefer to grow in slightly shaded moist soil with plenty of humus butthey are rarely seen in cultivation.Perhaps its monocarpic nature is off-putting to growers. They tolerate a cool, frost-free winter kept fairly dry. They often produce volunteer seedlings around themselves after flowering. They are very tolerant of considerable shade. Given the right conditions these plants will provide an marvelous show of yellow flowers. Grow these plants hard with very little fertilizer because they can flower them selves to death.
In winter they require a rather sunny spot inside at moderate, cool temperatures.