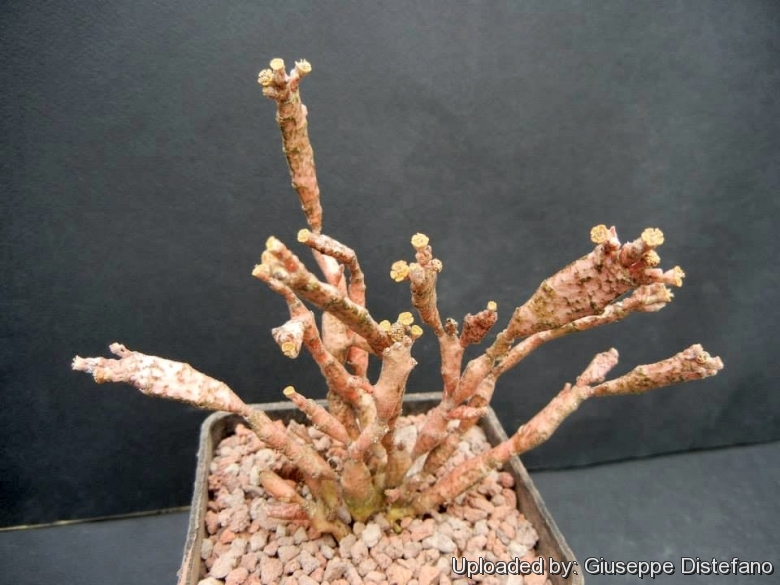 Origin and Habitat: Madagascar South-west Madagascar: 50 km north-west of Tulear, on the way to the Fiherenana valley (Anjamala area) and near the road from Fort-Dauphin to Ampanihy. This species comprises two varieties both of which are only known from very small restricted areas – two localities in total.
Habitat and Ecology: It grows in mats in dry deciduous Alluaudia forests. It is camouflaged to disappear on the forest floor. This species is threatened by habitat degradation, fires. Possible future threat from collection for the horticultural trade.

Description: Euphorbia platyclada is a fleshy succulent plant with weird flattened mottled red-brown stems radiating from a raiseable heavy rootstock... nothing green about it. The branches are very interesting, unique, ugly, with an irregular scab like texture, and look dead, or at the very least zombified. These branches are splayed out with fingers dangling like dead weights. Truly an oddity, this is a plant only an enthusiast can love... looks like it's dead all the time and so pathetic looking it makes many people laugh when they first see it. Actually, this is a very interesting collector's succulent plant when grown into a specimen which does not take too long.
Habit: It is a small leafless, freely branching subshrubs, to 50 cm tall. There are both erect and prostrate forms.
Branches: Succulent, elongated, irregularly flattened, to 10 (-15) mm wide and 2-3 mm thick, waxy, and typically a bright pink or red-brown colour criss-crossed with veins of dark grey-green, tuberculate when young; base round. The stems tend to grow horizontally (but erect forms are also known), sometimes reaching 9-12 cm before branching and reaching again. The stems tends to turn duller in colour with less sun.
Flowers (cyathia): At the stem tips, dull orange-gold or brownish, tiny, only 2 mm in diameter. The flowers almost blend into the dead-looking colour of the rest of the plant. It is self fertile.
Blooming season: It flowers mostly at very end of summer but occasionally throughout the year, and because it's self-fertile, also produces regularly seed pods.
Fruits (capsules): Explosive, and the seed goes everywhere.

Subspecies, varieties, forms and cultivars of plants belonging to the Euphorbia platyclada group 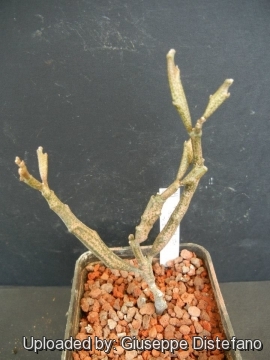 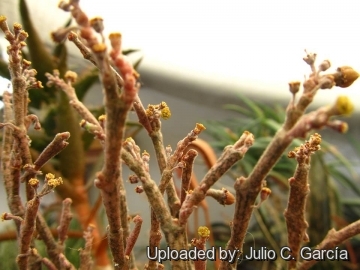 Cultivation and Propagation: Euphorbia platyclada is an easy species to grow that is suited for a hot dry spot in the garden. But young plant are happy growing indoors in a decorative pot. Give the plant an airy growing medium which mainly consists of non organic material such us clay, pumice, lava grit, and only a little peat or leaf-mould. Water regularly during the active growing season from March to September. No water should ever be allowed to stand around the roots. Keep almost completely dry in winter. If plant becomes reddish, this is a sign that the roots have not developed properly. It is a relatively fast growing and long lived plant and once established, it will be content in its position and with its soil for years. It can tolerate moderate shade, and a plant that has been growing in shade should be slowly hardened off before placing it in full sun as the plant will be severely scorched if moved too suddenly from shade into sun. Like quite small pots, repott in very later winter, early spring. Can be pruned for shape and branching.
Frost tolerance: Frost tender, it can withstand temperatures only above 2º C.
Pests and diseases: It is prone to mealy bugs and rarely scale.
Propagation: It is easy to propagate by cuttings in late spring to summer, just take a cutting of the plant dip it in rooting hormone, allow it dry for for a week prior to planting in the ground (preferably dry, loose, extremely well draining soil).
Warning: All parts of Euphorbias ooze a milky sap when damaged or cut. Contact with this sap may cause dermatitis in some people, and in the eyes the sap can cause temporary blindness which may last for several days.