Euphorbia crispa Photo by: © Plantemania
It is rare geohyte species with a caudex-like root system, branching from the base. The leaves on long stalks, are narrow, tapering, and minutely haired.The margins are crisped.

Origin and Habitat: Western Cape, South Africa.
Habitat and Ecology: Fynbos, Succulent Karoo. Euphorbia crispa grows in sandy and stony flats and slopes. In this geophyte specie the stem seems to be almost absent, the water supply being lodged in the tuberous root. This is also typical of Euphorbia ecklonli of the Western Cape, and Euphorbia silenifolia which extends from the south-western Cape to Port Alfred.

Description: Euphorbia crispa is a stemless, dioecious (unisexual), tuberous-rooted geophyte herb, forming a short elongated, perpendicular body, wholly buried in the ground with tip at ground-level producing leave and inflorescences. The leaves, produced for a short while each year, appear flat on the ground. E. crispa is very similar to Euphorbia tuberosa, suggesting that there is not really a fundamental difference between the two.
Rootstock: The root is tuberous ellipsoid or ovoid and merges into an short wholly buried stem, sometimes divided at the top into 1 or more very short, cylindric 0.8 to 2.5 cm thick subterranean dark brown stem-like, branches, with tip at ground-level or just above ground producing a number of deciduous annual leave and inflorescences.
Leaves. Leaves all radical, ascending-spreading, deciduous. Petiole 12-50 mm long. Blade (lamina), subcoriaceous, 12-50 mm long, 5-10 mm broad, lanceolate to elliptic, obtuse and usually slightly folded together at the apex, more or less cuneate at the base, wavy or crisped on the margin, entire, quite glabrous on both sides, or pubescent on the petiole and midrib beneath.
Inflorescence (cymes): Peduncles in the axils of the leaves, 12-37 mm long, glabrous or pubescent, with an umbel of 2–5 rays in the male and a solitary cyathium or a 2–3-rayed umbel in the female, and 2–5 bracts at the base of the umbel or cyathium. Rays with 1 cyathyum. Bracts sessile, 3-5 mm long, 2.5-4.5 mm broad, obovate or elliptic-oblong to suborbicular, obtuse or broadly rounded and more or less apiculate at the apex, glabrous or pubescent.
Flowers (cyathia): Sessile between the bracts, 5-6 mm in diameter, cup-shaped, glabrous or pubescent, with 5 glands and 5 oblong toothed and ciliate lobes. Nectar glands not contiguous (separate), spreading, 1-2 mm in their greater diameter, transverse, suboblong, borne upon short flat stalks, apparently greenish-yellow.
Fruit (capsule): erect, 6 mm in diameter, trigonous-subglobose, pubescent, with a puberulous crenate ring at its base and seated on a short puberulous pedicel (subsessile ) much shorter than the cyathium. Styles about 3 mm long, united into a column for nearly half their length, with spreading deeply bifid arms.
Seeds: 3.5-4 mm long, oblong or subglobose-oblong, abruptly acute at one end, truncate at the other, varying from nearly smooth with a ridge or ring of tubercles near the truncate end to irregularly tuberculate all over, dark brown, opaque. 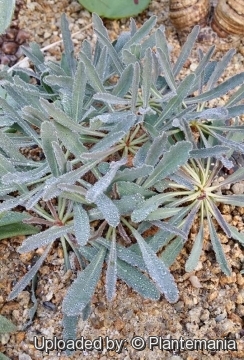 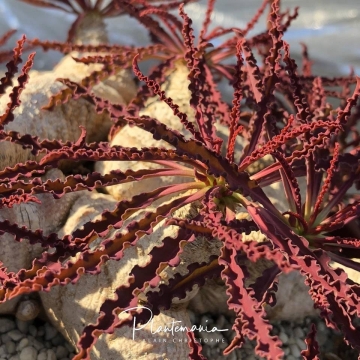 Euphorbia crispa Photo by: © Plantemania
Send a photo of this plant.

Cultivation and Propagation: Euphorbia crispa is not easy and the plants can easily rot. The plants should receive water mainly in winter and be grown in a well drained sandy soil. It has been propagated by seed only. It rests in summer and produces new leaves and inflorescences in winter, the older leaves wither and drop in spring. {{Euphorbia ecklonii}} is a particular favourite of caudiciform plant enthusiasts. It is particularly prone to rot if left cold and damp while dormant.
Caudex exposure: The remarkable succulent rootstock or caudex is usually raised above the soil line so that this can be seen and more readily appreciated.
Soil and pots: It likes pots with generous drain holes, needs a very airy potting medium which mainly consists of non organic material such us clay, pumice, lava grit, and only a little peat or leaf-mould, seeing that the main trunk is planted with the majority of the roots below the caudex line. It's rare that it will use the upper third of its soil and often this area serves like a mulch or support for the stem.
Fertilization: Need a perfect fertilizer diet in summer. Use preferably a cacti and succulents fertilizer with high potassium content including all micro nutrients and trace elements or slow release fertilizer.
Exposure: This plant has an excellent heat tolerance, and need full sun to light shade exposures, but can tolerate shade.
Watering: Water regularly during the active growing season. No water should ever be allowed to stand around the roots. Keep almost completely dry in winter. Even though the swollen caudex ensures a long lasting water reserve making it very tolerant of under watering, this euphorbia is difficult, turning immediately to mush when over watered, or watered out of season. Care must be given in watering, keeping them warm and wet while growing, and cooler and dry when dormant.
Hardiness: Tender. This spurge can be difficult to get it to look its best without a good amount of heat and sun and so it is only really suited to the tropics (USDA Zones 10-11). Keep the plant cooler in winter, but maintain the light as bright as you can so that any growth which it may produce at this time will not be etiolated. Protection in a warm greenhouse in the middle of the winter will greatly increase the survival rate.
Rot: Rot it is only a minor problem with Euphorbias if the plants are watered and “aired” correctly. If they are not, fungicides won't help all that much. It is very unlikely to lose this plant from root rot from excessive water.
Known hazards: The latex/sap is poisonous and can cause skin rash, itching and general discomfort, and they should be handled with caution, particularly when pruning.
Propagation: The plant can be only reproduced by seeds.