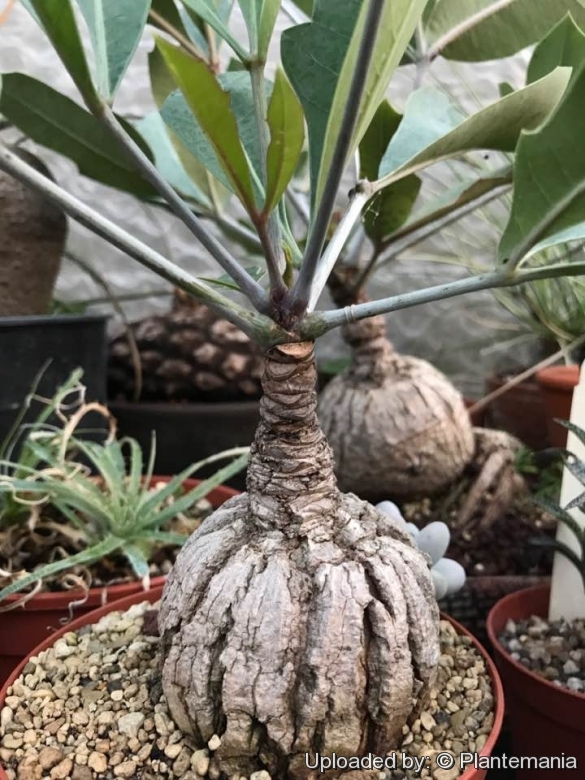 Origin and Habitat: South Africa (from the mountains of the Karoo and Eastern Cape through KwaZulu-Natal and Free State into Gauteng and further north. It is commonly found near Johannesburg and Pretoria.) and Botswana. The smaller mountain cabbage tree C. paniculata subsp. paniculata has leaflets without lobes and has a limited distribution in Eastern Cape. C. paniculata subsp. sinuata forms a larger tree with deeply lobed leaves and is more widespread.
Altitude range: It grows at altitudes up to 2100 metres.
Habitat and ecology: Cussonia paniculata is found in open bushveld, wooded grassland, sheltered and exposed rocky slopes and on rocks in open grassland, in all Ecozones, mainly in crevices filled with natural organic humus and compost. The flowers are pollinated by an enormous variety of insects that have wings e.g. bees, wasps, flies. When they are in full flower it sounds like a beehive. The flies and insects are attracted by the flowers' smelly nectar. The flowers may have lots of pollen too. The seed are not as easily parasitized by pests as Acacia and Rhus species. The birds feed on the ripened, black seed. It is frost-tolerant and drought resistant.

Description: Cussonia paniculata is a single-stemmed, high-branching, evergreen tree 3-5 metres high, with hand-shaped leaves forming a rounded crown on the ends of thick, stubby branchlets. Flowers are aggregated in a branched panicle of spikes, greenish yellow. The fruit is a globose, fleshy drupe the size of a pea, purple. This plant is considered a pachycaul succulent on the basis of its swollen stem base or tuber which forms early in plants grown from seed. Normally this plant does not make caudex when it is adult, only when it is small.
Derivation of specific name: The specific name refers to the panicle or branched inflorescence.
Stem: Trunk sturdy, thick and squat, sparsely branched. The bark is deeply fissured and corky.
Roots: Thick and swollen.
Leaves: Digitately compound (hand-shaped) with 7-9(-13) deeply lobed leaflets. Petiole very long up 25(-50) cm long. Leaflets lanceolate-acuminate, not subdivided, 15-20(-27) cm long and 2.5-4,5 wide, sessile or attenuated in a short petiole. Margin very variable often quite entire, or with a few sharp teeth, rarely deeply incised or pinnatifid with the sinus extending sometimes almost to the midrib, or wavy in subsp. sinuata (found in central and northern parts of range), entire or sparsely toothed in subsp. paniculata (mainly southern Karoo and Eastern Cape) and the upper leaflet ternate. Lobes equally variable in width, with revolute margins. Apex broadly acute with a short terminal mucro. Lamina coriaceous, glabrous, blue-green with a distinctly glaucous sheen beneath.The leaf colour is in some part due to the thick waxy layers on the leaves, which may help protect them against severe frosts. New leaves are brighter green and emerge in a spring flush at the ends of branches.
Inflorescence: Panicles (or racemes) aggregated, 30-35 cm or more in length, on branched stalks. Main axes up to 35 cm. long, glabrous, finely but distinctly grooved. The branches or peduncles spreading, 2.5-5 cm long at the base, with short basal bracts. Spikes 2.5-5 cm long, dense. Floral bracts minute, more or less lanceolate
Flowers: Greenish-yellow, sessile, calyx nearly entire; fruit globose; styles 2.
Blooming season (in habitat): January to April.
Fruit: Subglobose, distinctly fleshy and about the size of a large pea (ca. 6 mm in diameter), purple, berry-like (showing clearly the 2 carpels when dry) with the spreading styles and crowded tightly in spikes, maturing in May-June. Mature fruit sometimes only setting rather irregularly on the spikes, with many infertile flowers. 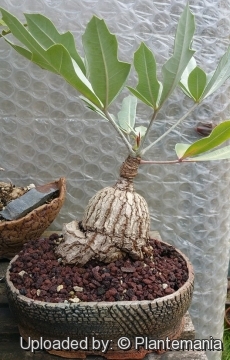 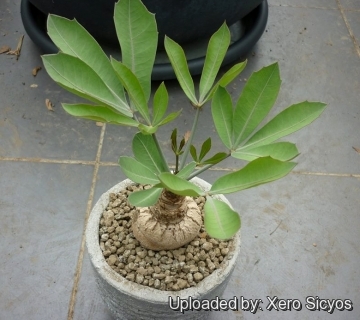 Cultivation and Propagation: Cussonia paniculata is a beautiful shrub that, in difficult growing conditions, produces a caudex. In youth the base of the stunk becomes fat (caudiciform), with contorted branches. The plants with caudexes are those that grow in the dryer areas where they remain stunted and where caudex never disappears. If the plant is cultivated in the ground (in rich loamy soil) the caudex disappears and the cussonia becomes a tree. If we want the plant keeps all its distinctive characteristics it may be grown in the the way of Bonsai. Gardeners and cauduciform enthusiasts favour them greatly for their unique appearance. The tree is slow growing and frost-tolerant.
Soil: Keep in a rich but well drained mix.
Waterings: They can be watered copiously as long as the medium is open and well drained. As with any normal plant when watering, it is best to do so thoroughly, until a little water comes out through the drain holes. Allow the medium to dry out somewhat between waterings. Reduce watering to once every 1 month during winter. Stop to water around ten degrees. Space plants apart to allow air movement between branches and leaves. This will help with evaporation of extra water droplets collected during watering.
Exposure: It doesn't need much sun.
Garden uses: This tree makes a beautiful focal point in a garden as it has an unusual shape, interesting gnarled bark and stunning, large, grey-green leaves. Plants show up especially well in a layout where rocks are used.
Traditional uses: The wood is soft and light and was used for the brake-blocks of wagons. The leaves provide good fodder for stock and the Zulu name refers to this tree as goats' food. The thick root can be peeled and eaten raw as food or as a source of water . It was traditionally used to treat infections, inflammation and malaria.
Propagation: Seed, but can be also propagated by stem or root cuttings. Sow seed harvested from fresh ripe fruits, as soon as possible as it loses much of its viability within 3 months. However, seed sown in summer months will germinate faster (in about 4 weeks) than seed sown in winter (7 weeks to germination). Make sure seed trays are at least 15 cm in depth to allow the small tubers to form. Do not allow seed to become waterlogged or dry out. Keep seed and seedlings in a semi-shaded area. Seedlings can be transplanted at about 4 months, but be very careful not to damage the fleshy roots when transplanting. One can grow Cussonia paniculata from a cutting, but this is not advisable because it does not make the proper, fleshy, underground rootstock that it forms when grown from seed. Micropropagation of this species is particularly advantageous to propagate forms with variegated leaves as ornamentals.