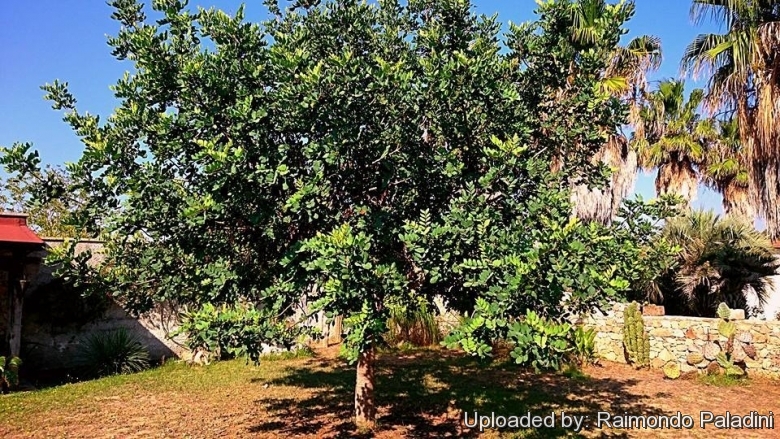 Origin and Habitat: Ceratonia siliqua is native of the Mediterranean region, including Southern Europe, Northern Africa, the larger Mediterranean islands, the Levant and Middle-East of Western Asia into Iran; and the Canary Islands and Macaronesia. Although used extensively for agriculture, it can still be found growing wild in eastern Mediterranean regions, and has become naturalized in the west. It is fairly widely grown in Africa, southern America, India, Australia and elsewhere in the tropics.
Altitude range: from sea level up to 500 m and peculiarly up to 900-1600 m.
Habitat and ecology: It grows well in mild Mediterranean climates and subtropical areas with cool, not cold, winters, mild to warm springs, and warm to hot, dry summers. As a xerophyte (drought-resistant) species, carob is well adapted to the ecological conditions of the Mediterranean region with 250 to 500 mm of rainfall per year. C. siliqua, together with Olea europea var. sylvestris, and other species such Pistacia lentiscus, Tetraclinis articulata, Juniperus phoenicea, Pinus halepensis and Quercus ilex forms one of the most characteristic associations of the lowest Mediterranean vegetation zone and is thus considered a climax community (Olea-Ceratonion). Pollen dispersal is by insects, mainly bees, flies, wasps and night-flying moths. The sweet ripe pods eventually fall to the ground and are eaten by various animals, thereby dispersing the hard seed.

Description: The Carob bean (Ceratonia siliqua) is an evergreen unarmed shrub or tree up to 10(-15) m tall. It is widely cultivated for its edible pods, and as an ornamental tree in gardens. The crown is broad and semispherical, supported by a thick trunk with brown rough bark and sturdy branches. The ripe, dried pod is often ground to carob powder, which is used to replace cocoa powder. Carob bars, an alternative to chocolate bars, are often available in health-food stores. The pods of C. siliqua are nutritious and are also used as fodder. Most carob trees are dioecious (male or female), some are hermaphrodite. The male trees do not produce fruit.
Leaves: Simply pinnate, with or without a terminal leaflet, alternate,10 to 20 cm long, alternate, with 2–10 opposite pairs of leaflets. Leaflets coriaceous, elliptic to orbicular, 3-7 cm long, 2,5-4 cm wide, dark glossy green above, pale green and finely veined below. Margins slightly ondulate. Stipules tiny. Carob does not shed its leaves in the autumn but only in summer every second year, and it only partially renews leaves in spring (April and May).
Inflorescences: Dense many-flowered racemes which are axillary or clustered on the older wood and even on the trunk (cauliflory).
Flowers: Small (6-12 mm long), greenish-tinted red, spirally arranged along the inflorescence axis with no petals and 5 free, exserted stamens (in the female and hermaphrodite). Calyx disc-shaped, placed on a short pedicel reddish-green, bearing nectaries, caducous. Females consist of a pistil (6-8.5 mm) on a disk and rudimentary stamens, 5 hairy sepals. Males consist of a nectarial disk, 5 stamens with delicate filaments hairy sepals. In the centre of the disk there is a rudimentary pistil. Hermaphrodite flowers a combination; containing a pistil and a complement of 5 stamens. Flowers are they are pollinated by both wind and insects.
Blooming season: The trees blossom in autumn. However, the time and the length of the flowering period depend on local climatic conditions.
Fruits (legume a.k.a. pods): Elongated, thick with wrinkled leathery surface, pulpy, dark brown, indehiscent 12–30 cm long and 1,5-3,5 wide and about 1 cm thick, laterally compressed, straight, or curved, with blunt or subacute apex, many-seeded, and thickened at the sutures. The pods take a full year to develop and ripen.
Seeds: Very hard, numerous, compressed ovate-oblong, 8-10 x 7-8 mm, 3-5 mm thick; testa is hard, smooth, glossy brown.
Chromosome number: 2n = 24. 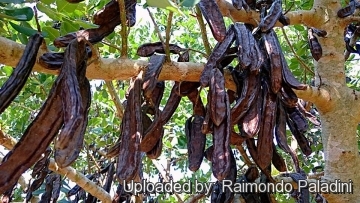 Ceratonia siliqua Photo by: Raimondo Paladini
Send a photo of this plant.

Cultivation and Propagation: Carob trees can survive long drought periods, but to grow fruit, they need 500 to 550 mm rainfall per year.
Soil: Trees prefer well-drained, sandy loams and are intolerant of waterlogging, but the deep root systems can adapt to a wide variety of soil conditions and are fairly salt-tolerant.
Propagation: The vegetative propagation of carob is restricted due to its low adventitious rooting potential. Therefore, seeds are still widely used as the propagation medium.Carob trees enter slowly into production phase. Where in areas with good growing conditions, the cropping starts 3–4 years after budding, the nonbearing period can take up to 8 years in regions with marginal soils. Full bearing of the trees occurs mostly at a tree-age of 20–25 years where the yield stabilizes.