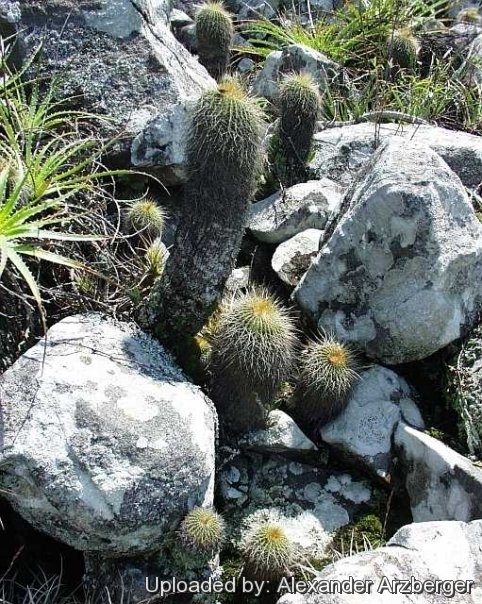 Origin and Habitat: Paraguay, between Carepegua and south-east of the Cerro Acahay, department Paraguarí, (it is one of the most southerly species of Eriocactus).
Altitude range: Around 500 metres above sea level.

Description: Parodia grossei ( Eriocactus grossei ) is only a form of Parodia schumanniana and most authors choose to lump them together. It is one of the largest species of the genus and distinguishes for having only 3 to7 long bristly white spines. Schumann originally described it with 16 ribs and four radial spines. It has a white, woolly crown and bright yellow flowers appear atop the plant in summer.
Stem: Globose to depressed or sometimes cylindric, sometimes up to 1.7 meters high and up to 30 cm thick.
Ribs: Usually 16, acute, somewhat crenate.
Areoles: Small, circular.
Spines: 3 to 7(-8), spreading, acicular, curved, white or brownish, the longer one 4 cm long.
Flower: Large, funnelform, citron-yellow, 4 cm long, when fully expanded broader than long. Perianth-segments oblanceolate to spatulate, obtuse, serrate above. Stamens numerous, short. Style slender, longer than the stamens; stigma-lobes 12 to 17, linear, white, recurved. Scales on the ovary numerous, linear, purplish, with wool and bristles in their axils.
Fruit: Short oblong, 2.5 cm long, 2 cm. in diameter.
Seeds: Bell shaped, 0.8(-2?) mm long and 0.8 mm thick, glossy reddish-black or black.