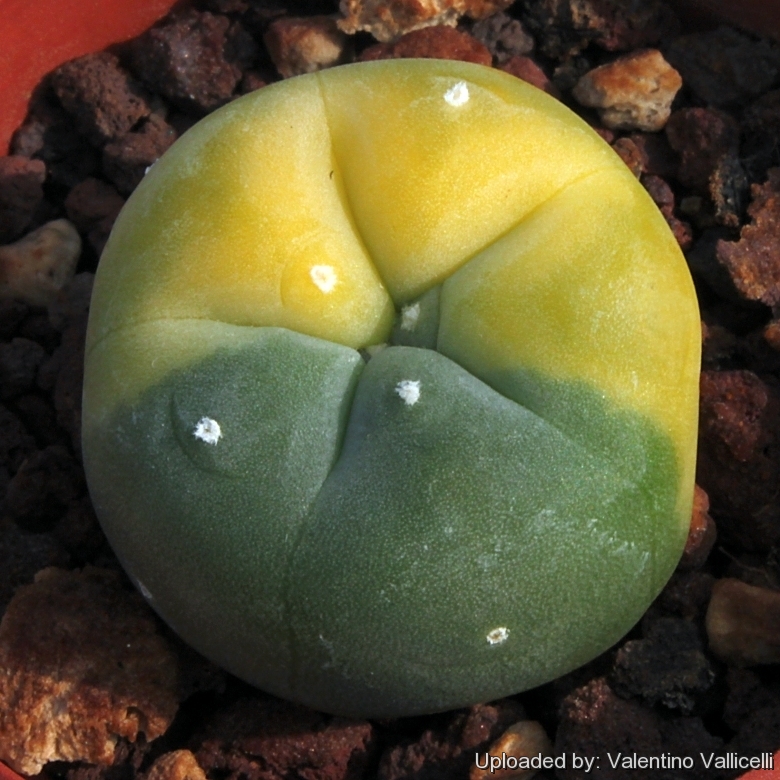 Description: Globular spineless cactus with large tap root.
Stem: Pale grey-green to yellow-green, usually lacking well defined ribs and furrows.
Ribs: 5 to 13 the podaria are rarely elevated, but are broad and flat.
Areoles: With tufts of hairs that usually spread unequally on the prominent podaria.
Flowers: Commonly pale to dark pink ( or rarely pinkish white), reaching over 4 centimetre in diameter.
Remarks: In habitat Lophophora fricii is a very mutable species. It´s hardly to find two similar plants at one location. Particularly in terms of the bloom they are different at the same locations.
Variegate forms: Variegate Lophophora williamsii var. fricii are seldom available, but coveted by impassioned for the beautiful spineless body stripped in yellow, cream or pink. The odd variegate appear unpredictably in seedling batches in a small percentage, and are generally separated from normal plants. Variegated plants grow more slowly, and are generally smaller than non-variegates. Coloured areas are also generally weaker, and more susceptible to fungus, sunburn and other defects. A large well grown variegate Lophophora is truly an achievement. These are harder to grow well than they appear.

Cultivation and Propagation: Variegated and albinos Lophophora are regarded as choice and difficult in cultivation, but despite that some of them are relatively easy to grow. Be aware that they cannot tolerate prolonged exposure to direct sun light (especially during the hottest summer days), so grow them in half-shade or under filtered sun. They are sometime seen as grafted plants, but some grow well on their own roots, too.
On the contrary, the albinos can survive only if grafted on a strong green base.
Use mineral well-permeable substratum with little organic matter (peat, humus). Water sparingly from March till October and keep perfectly dry in winter at temperatures from 5 to 15 degrees centigrade. (In general these plants are more tender and cannot endure freezing temperatures ) In the rest period no high atmospheric humidity!!
Propagation: Almost usually by seed. Plants are often grafted onto column-shaped cacti.