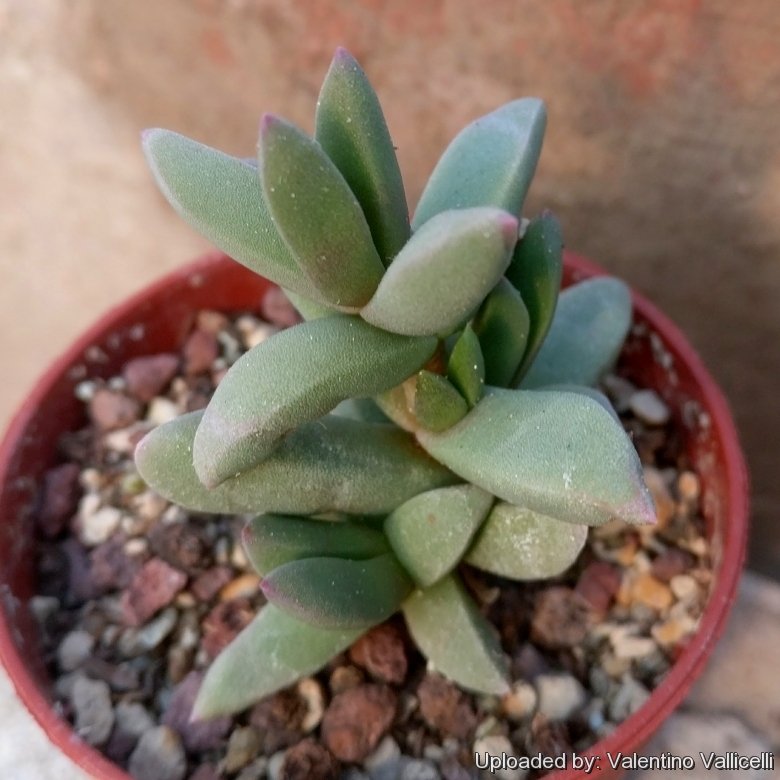 Origin and Habitat: Psammophora modesta grows in the northern, coastal Richtersveld (Northern Cape, South Africa) and the Namibian south coast near the Orange river.
Habitat and ecology: Psammophora modesta grows in full sun on gravelly, calcium rich soil or in sand-filled pockets on slope of dolomite rock together with Euphorbisa chersina, Zygophyllum prismatocarpum, Sarcocaulon multifidum, and Psammophora nissenii, in areas with less than 100 mm rainfall per annum in winter and fog. It is a special psammophorous life-form of those inselbergs which are within reach of the frequent sandstorms of the region. Psammophora modesta is well sheltered against the destructive form of sand-blasting by a layer of brown sand grains fixed to the surface of their leaves due to excreted sticky substances. The plants may be confused with some Arenifera species that grow in this region, but also further south (Smith, et al, 1998).

Description: Psammophora modesta or gomvy (gum fig) is a pink-flowered, low-growing shrubby succulent to 15 cm high with reddish and very slimy young leaves to which sand adheres. The sandstorms soon cover it with sand which sticks to its leaves so that it very much resembles its environment. Its capsule mostly 6- 7-locular and lacking covering membranes. It is a widespread species very variable in shape and size, in habit and leaf especially. This is the only shrubby member of the genus that is seen in cultivation. Plants in cultivation seem to have a lifespan of up to 25 years, perhaps due the lack of regeneration from the base.
Stems: Branches often decumbent and with leaves only in their terminal parts.
Leaves: Triangular to square in cross section, rarely roundish, 20-40 mm long, 7-10 mm broad, 6-8 mm thick, epidermis surface rough, with sticky, wax covering to which wind-borne sand adheres, thus reducing the loss of precious water from the leaves. In a few inland populations of P. modesta the leaves have a stronger odour suggestive of Commiphora and cat urine.
Flowers: Solitary, pedicellate with two pairs of bracts,15-25 mm in diameter. Petals pink to purple, base sometimes white. Filamentous staminodes mostly 0-4 white or pink, rarely up to 18. Stamens 70-190, dark green.
Taxonomic note: In the very broad and rounded valve wings, P. modesta is similar to Psammophora nissenii.
Fruits: 4-9 loculed (mostly 6 or 7 loculed) with a spongy base, but no columella, valve wings very broad and rounded when the valves are expanded, septa without ledges, covering membranes absent,
Seeds: 0.6-0.95 mm long, 0.45-0.7 mm broad.

Notes: Psammophora is one of two members of Mesembryanthema which have sticky leaves to which sand adheres (probably with heat-reducing function). In Psammophora the glue is made under the cuticle, which bursts, setting it free. (Arenifera also has sticky leaves but its different capsular structure places it away from Psammophora) [Jurgens 1996].

Cultivation and Propagation: Psammophora grow on a varied rainfall period, but in cultivation they do very well with the fall-winter growing period during which they are watered not too frequently and heads for summer dormancy. Psammophora are tricky plants that are very particular about their growing conditions and require the right maintenance in order to keep happy. They are notoriously difficult to grow because they rot easily, but they are not so really difficult in cultivation, keeps going over the summer too and don't need very special care. The growing season in northern hemisphere is from September to March. If you provide the Psammophora with the right conditions, they will reward you with their unique shape, size, colour and a proliferation of blooms in winter. Being small plants, a representative collection can be grown on a patio table, a sunny windowsill or a shelf in the greenhouse.
Soil: It grows best in sandy-gritty soil and requires good drainage as it it is prone to root rot. It can grows outdoor in sunny, dry, rock crevices (protection against winter wet is required) It can also be cultivated in alpine house, in poor, drained soil.
Repotting: They may stay in the same pot for many years. Plants grown in larger containers have frequently relatively poor flowers. They might improve when the plants are given their own, small individual pots.
Fertilization: Feed it once during the growing season with a fertilizer specifically formulated for cactus and succulents (poor in nitrogen), including all micro nutrients and trace elements diluted to half or one quarter the strength recommended on the label. It thrives in poor soils and need a limited supplies of fertilizer to avoid the plants developing excess vegetation, which is easily attacked by fungal diseases.
Watering: The Psammophora thrive in dry and desert regions and are able to stand extended periods of drought and require careful watering. Water minimally in summer, (only occasional misting), water more abundantly when they are growing in the autumn and spring, but let the soil dry between soaking. Requires little water otherwise its epidermis breaks (resulting in unsightly scars). If grown in a container, bottom watering by immersing the container is recommended. It must have very dry atmosphere.
Light: It needs a bright sunny or light shade exposure in winter, but keep cool and shaded in summer.
Hardiness: It prefer a very bright situation and require a minimum temperature 5 degrees C (But will take a light frost and is hardy down to -7 degrees C for short periods if it is in dry soil). USDA zones 9A-11.
Uses: Container, rock garden.
Pests and diseases: It is vulnerable to mealybugs and rarely scale.
Propagation: Seed in autumn or (or rarely) cuttings. Take the cutting from a grown-up mother plant. Each cutting must contain one or more heads along with a fraction of root and permit to dry out a couple of days, lay it on the soil and insert the stem end partially into the soil. Try to keep the cutting somewhat upright so that the roots are able to grow downward. It is relatively difficult to root Psammophora from cuttings and generally pointless as well, so quick are they from seed.