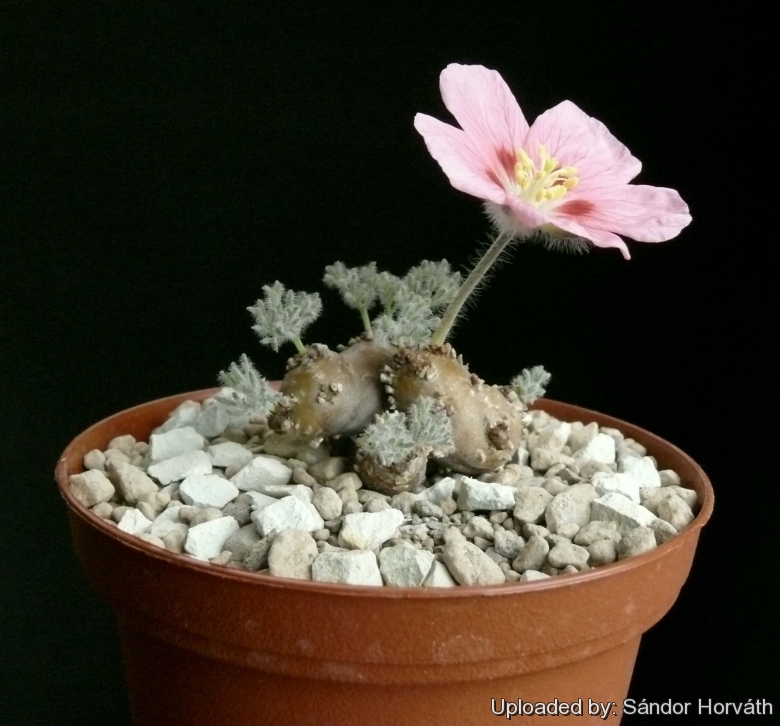 Origin and Habitat: Monsonia multifida is endemic to a small area on either side of the mouth of the Orange river in Namibia and Richtersveld Northern Cape,Republic of South Africa. This species has an extremely limited range. It occurs in several patches of about 20-30 m².
Habitat snd ecology: This tough plant occurs within the Lower Orange River Zone in an area roughly between 10-60 km from the sea together with Tylecodon buchholzianus and Conophytum loeschianum. This tough plant grows in dry, exposed stony flats on almost pure rock (usually shale) and among dunes. This species is threatened by severe, ongoing habitat loss and degradation across its range in South Africa severe overstocking of livestock is causing trampling disturbance that is negatively impacting all plant species in the area, even those that are not grazed. Mining expansion is causing not only ongoing habitat loss, but also degradation for a wide area surrounding the mines, mainly due to dust blowing from exposed mine dumps, burying dwarf species such as this one, and irresponsible off-road driving of vehicles across sensitive quartz habitats. In Namibia this species also occurs largely within a diamond mining area. It is a long-lived, slow growing species that seldom recruits, and the population reduction would be within one to two generations. 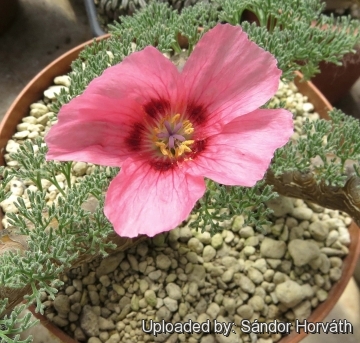 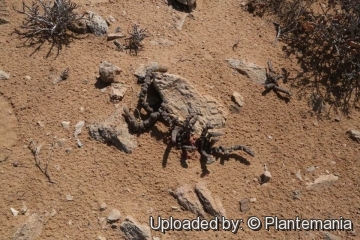 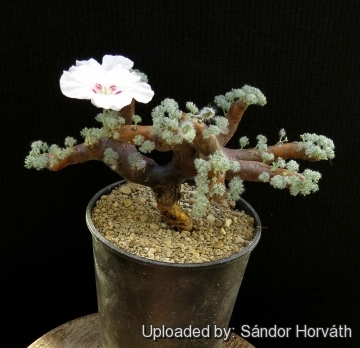 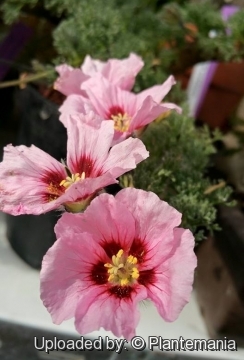 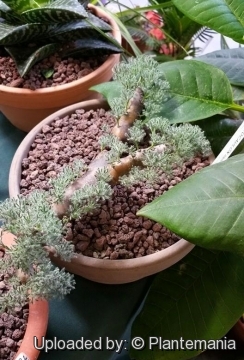 Cultivation and Propagation: Monsonia multifida is a decorative plant which has the fame to be difficult to care properly in cultivation, however it is relatively easily grown species, very suitable for bonsai. Seed-grown plants thrive and flower prolifically in cultivation while imported specimens rarely produce an extensive new root system and flower sporadically, but survive for many years.
Soil: The substrate must be very well draining and rather mineral in composition with at least 75% of pumice and lava grit.
Exposure: They require direct sunlight when in full growth, while a filtered exposition is best during the hottest period of summer, when the plants enter in their dormancy phase. They always grow best in positions where they receive long periods of strong sunlight.
Watering: They need to be regularly watered every 6 to 10 days whilst they are in active growth and and producing leaves, occasionally during dormancy. In cultivation it appear best not to let plants go into dormancy and to water year round. Nevertheless even in habitat the Sarcocaulons appear to be opportunistic and respond to precipitation events when they occur. As soon as the foliage starts to show signs of yellowing or withering, water should be withheld. It is very important that there is plenty of free air circulation around cultivated plants and also that they are not overwatered.
Temperature requirements: It is advised to maintain plants at a minimal temperature of 8°C during the winter.
Propagation: All sarcocaulon species are readily grown from seeds. Seeds should be sown just under the surface of the soil, in large seed trays or plastic pots. They should be planted out into individual containers when they are about two years old. The most dangerous period for seedling is in summer. They need to be kept dry whilst dormant but at the same time their trunk do not withstand continual drought. The seedlings adapt to the climate where they are grown and develop a vigorous root system. Propagation by cutting is rarely satisfactory and often cutting rarely branch out.