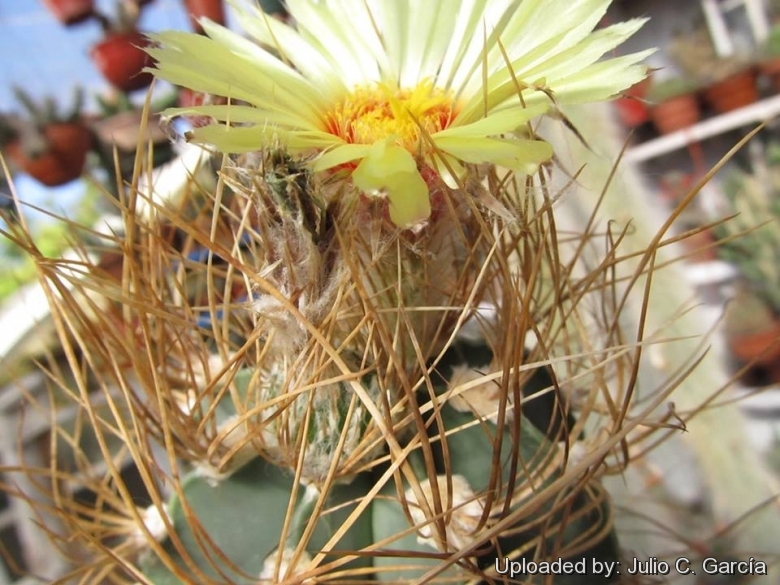 Origin and Habitat: Sierra de la Paila (between Viesca and Parras de la Fuente) Coahuila, Mexico
Habitat: it grows in a very arid area near to the habitat of Astrophytum capricorne subsp. senilis ( rain about 200mm/annun and irregular with less than 10 mm in January). The daily and seasonal temperature fluctuation is considerable, and in winter it is not infrequent a night frost followed by a hot temperature the same day.

Description: Plant with sharp ribs that differs from the type species for the absence of white flocks.
Stem: Globular to short cylindrical with age up to 35-40 cm tall and 15 cm in diameter. The epidermis is green/bluish sometime tinged in purple.
Spines: Up to 20 per areole characteristically golden yellow when young, but as they ages become greyish like in the other capricorne. They similar in shape to those of Astrophytum senilis , bristly, flexible, 5 to 7(-10) cm long and pointing in all directions that often form up spirals, they are so densely nest wrapped that the body is hardly visible and looks like a dry grass bundle. The lateral ones grows horizontally sideways at first and then buckle while the others point +/-upwards. After rain they wet and become very flabby.
Flowers: Diurnal yellow with a red centre (like in the type species). 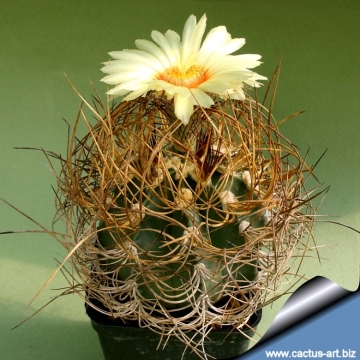 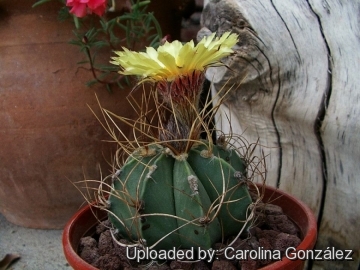 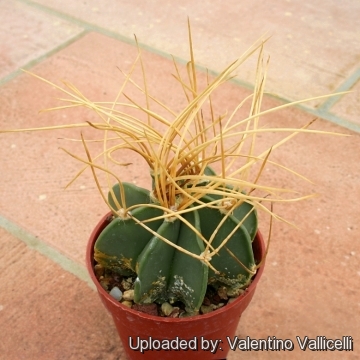 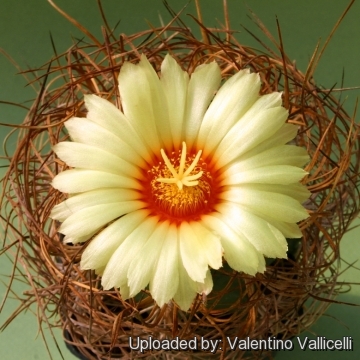 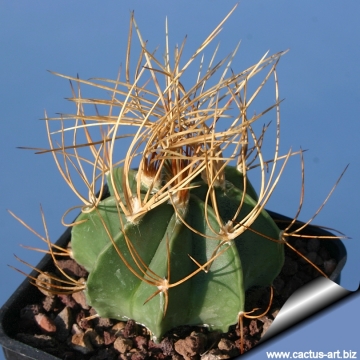 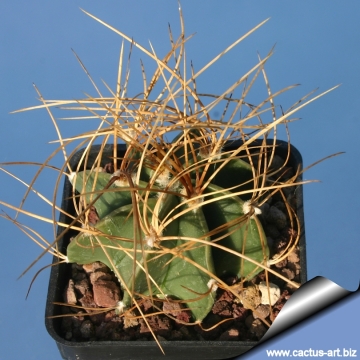 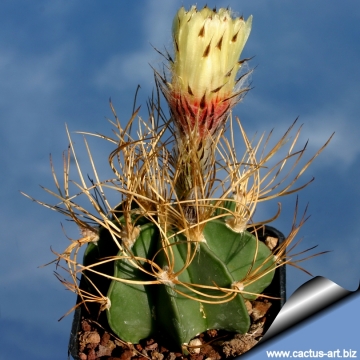 Cultivation and Propagation: It is a popular summer-growing species of relatively easy cultivation.
Growth rate: Slow-growing.
Soil: Grow it in an open standard, sandy-gritty cactus compost and provide a very good drainage.
Exposure: It is suited for sunny-brightly exposure, but can tolerate light shade. However it will do its best with lots of sun and become stressed with inadequate light which could result in poor growth and unnatural shape. It has a good heat tolerance.
Watering: Water regularly (about once a week) during the growing season and keep it completely dry during winter or when night temperatures remain below 10° C. Water it less than average if in bigger pots.
Fertilization: Feed them once during the growing season with a fertilizer specifically formulated for cactus and succulents (high potash fertilizer with a dilute low nitrogen), including all micro nutrients and trace elements diluted to ½ the strength recommended on the label. They thrive in poor soils and need a limited supplies of fertilizer to avoid the plants developing excess vegetation, which is easily attacked by fungal diseases.
Special need: It is suited for airy exposures. Provide very good ventilation. Nearly all problems occur as a result of overwatering and poor ventilation, especially when weather conditions are dull and cool or very humid. ere.
Hardiness: It likes warmth (recommended minimum winter temperature 5° C) But plants kept perfectly dry can easily survive to light frost (it is reported hardy to -9 ° C for brief periods).
Pests & diseases: These cacti may be attractive to a variety of insects, but plants in good condition should be nearly pest-free, particularly if they are grown in a mineral potting-mix, with good exposure and ventilation. Nonetheless, there are several pests to watch for:
- Red spiders: Red spiders may be effectively rubbed up by misting the plants from above.
- Mealy bugs: Mealy bugs occasionally develop aerial into the new leaves and flowers with disfiguring results, but the worst types develop underground on the roots and are invisible except by their effects.
- Scales, thrips and aphids: These insects are rarely a problem.
- Rot: Rot is only a minor problem if the plants are watered and “aired” correctly. If they are not, fungicides won't help all that much.
Propagation: It can be propagated easily from seed (seldom produces offsets). The seeds can be sown in pots of fine, well-drained sandy soil, any time during the spring when temperatures are warm. Cover the seeds with a fine layer of grit and water from below with a fungicide to prevent damping off. For the 1-2 weeks cover the pots with a sheet of glass/clear perspex to keep the humidity levels high. Remove the glass and replace it with light shade-cloth and mist once or twice a day for the next two weeks after which most seeds should have germinated. From then on mistings can be reduced to every second and then every third day as the little plants grow. The seedlings should not be disturbed until they are well rooted after which they can be planted separately in small pots. Sometimes it is grafted to avoid root rot problems as plants grafted on an hardy stock are easy to grow and no special skill is required.