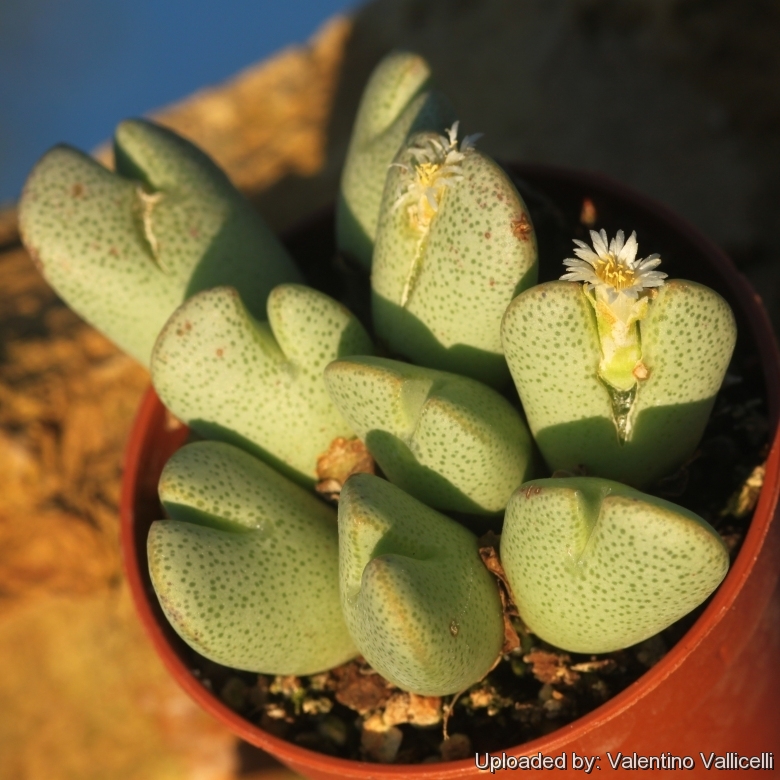 Description: Conophytum multipunctatum is one of the forms of the morphologically variable Conophytum truncatum. It is a dwarf almost stemless mat-forming succulent, distinguished from the type species for the pale grey-green bodies closely patterned with very numerous, fine, dots. Conophytum multipunctatum is not accepted by many botanists that treat it as synonym, but it still has a value for a collector because they identify plants with particular characters.
Bodies (paired leaves): up to 2 cm long and 1.5 cm in diameter, slightly pear-shaped, truncated above with depressed fissure. Upper side with rather peculiar humps of irregularly circular outline, pale grey-green, the whole upper whole upper surface and the upper part of the sides closely patterned with very numerous, fine, dots.
Flowers. Nocturnal white.

Cultivation and Propagation: All the forms of Cconophytum truncatum are easy to grow. These plants grow on winter rain and head for summer dormancy. They require little water; otherwise its epidermis breaks (resulting in unsightly scars). Water minimally in summer, (only when the plant starts shrivelling), but it will generally grow even in summer if given water. Water regularly in winter after the previous year's leaves have dried up. Requires good drainage. Keep cool and shaded in summer, it needs full sun or light shade. Hardy to -2°C. Ensure a very good ventilation. Avoid to repot frequently. This plant may stay in the same pot for many years.
Propagation: It can be reproduced both by cuttings and seeds. Take the cutting from a grown-up mother plant. Each cutting must contain one or more heads along with a fraction of root.