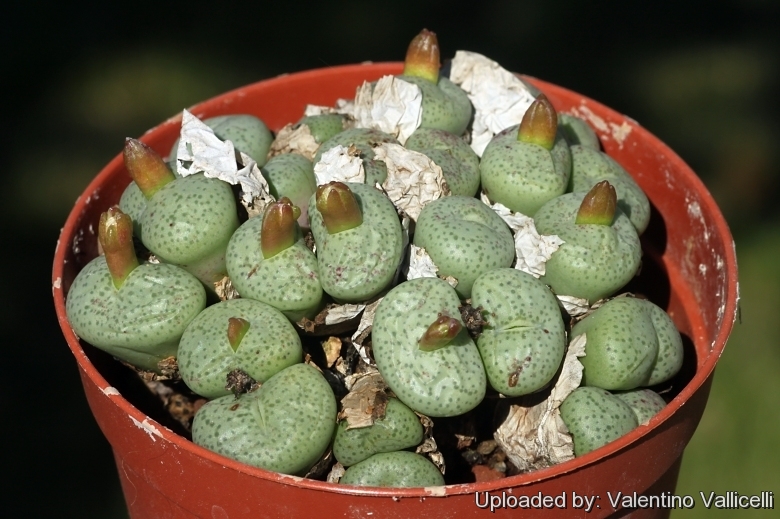 Origin and Habitat: West of Klaarstroom, Western Cape Province, South Africa.
Habitat: Conophytum peersii are winter grower succulents found in extreme dry areas in shale or quartzite rock crevices - known as obligate rock dwellers - where they don't have to compete with other plants for water, space and light. They are found generally growing on east, south or west-facing rocky outcrops and slopes - very seldom north-facing (too hot). They are often found growing in amongst mosses and lichens, and many noteworthy succulent plants can be seen in this area, including the panga mesemb (Bijlia dilatata). They grow, receiving a bit of winter rain, none at summer, but ocean fog moves inland in the evenings, and this moisture sustains a wealth of succulent life in this harsh semi-desert region. Their flowers are pollinated by nocturnal moths.

Description: The Witberg buttons (Conophytum peersii) is a local or morphological form of Conophytum truncatum with pale bluish-green bodies dotted with dark green spots, but not easily differentiated from the standard Conophytum truncatum, and hard to tell apart only by body characteristics.
Habit: It is a slow-growing, clump-forming, perennial succulent that forms huge tight mounds of sometimes many hundreds of pea-shaped heads, each one of them consisting of one pair of reduced, fused succulent leaves that get absorbed and regenerated every year.
Stem: Stemless.
Bodies (paired leaves): Pea-shaped with a sunken fissure at the flattened tip, marked with dark spots, and from grey-green to blue-green to having a heavy reddish colouration.
Flowers: The small flowers with spidery petals are nocturnal, and typically in shades of ivory-white, creamy, straw-yellow or salmon and very faint scented.
Blooming season: Plants flower during the fall months; each blossom opens at night. During the day the flowers close.
Roots: Very rudimentary filamentous root system. 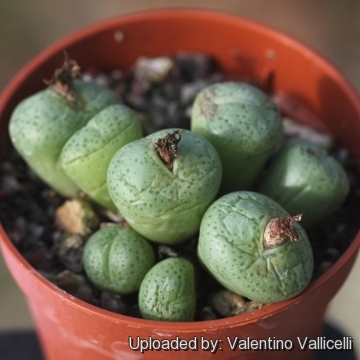 Conophytum peersii Photo by: Valentino Vallicelli
Send a photo of this plant.